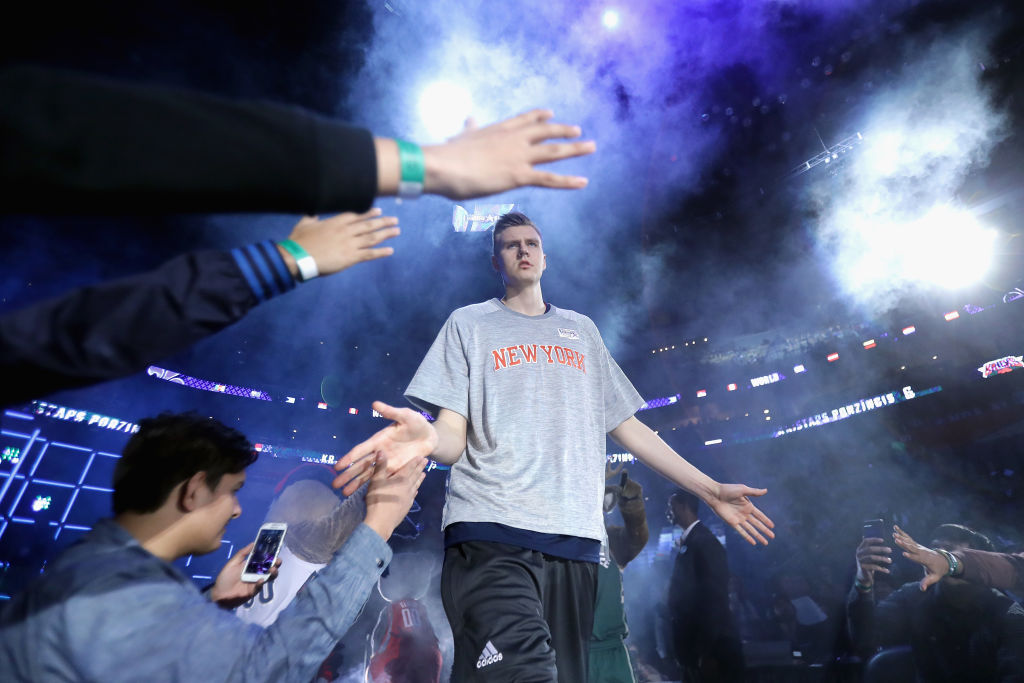 Kyrie Irving has helped propel his team to three straight NBA Finals appearances, one championship victory. His (now former) teammate, Kevin Love, was named to the NBA’s Eastern Conference All-Star Team last season before bowing out due to injury. DeAndre Jordan, Marc Gasol, and Paul Millsap were also named all-stars last season, and Blake Griffin has received the honor five times over the course of his NBA career. All of these players have one glaring thing in common, and if they take exception to it as severely as Carmelo Anthony, it’s safe to say they aren’t happy campers right now.

As ESPN continues to reveal its preseason player rankings (also known as #NBArank), the Knicks’ Kristaps Porzingis has emerged at No.22, slotting him above all of these aforementioned very prominent players.

Such recognition is a tad bit surprising, given that Porzingis has missed the all-star team in each of his first two seasons, battled injuries and missed time, all while serving on a losing Knicks team. In putting these rankings together, ESPN has been quick to weigh RPM quite heavily. Still, such a statistic isn’t one that should catapult New York’s rising star above his counterparts. Amongst all the aforementioned talents, Porzingis’ RPM is only greater than Gasol’s. Thus, such an explanation doesn’t hold water in this regard. There’s more to the story.

Upon reviewing these rankings, potential is held in very high regard and it’s clear Porzingis has a boatload of it. Truly one of the NBA’s most versatile talents, he continues to live up to his reputation of being an unicorn. At 7’3″, Porzingis can rebound the ball and is quickly emerging as one of the league’s better shot blockers. In unique fashion, he also continues to display a special amount of finesse in his game. Offensively, he’s explosive around the rim but can also dribble the ball and pull up for jumpers and/or catch & shoots from downtown. The youngster’s lengthy frame makes it difficult for opposing defenders of similar size to cover him out on the perimeter. They can’t chase him around or catch up fast enough. This allows him to create favorable mismatches against smaller defenders who can’t stack up as he shoots over them with ease. There aren’t many, if any, performers who boast a similar wide range of skills.

Porzingis averaged 18.1 points, 7.2 rebounds, 2 blocks, and logged shooting percentages of 45% from the field, 36% from deep, and 79% from the charity stripe. As he moves forward, building consistency and remaining healthy will be key to him eventually carrying the Knicks and being “the man.”

ESPN’s rankings clearly aren’t without their flaws. They shouldn’t be taken as gospel, even if they shed a very favorable light on someone who could very well rise up as the savior of Knicks basketball as we know it in the years to come. Having said that, the suggestion that New York has the 22nd best player in the league entering just his third season means there’s a very bright future ahead.