Report: Mets Planning On Keeping Mike Barwis As Strength and Conditioning Coach Despite Rash Of Injuries 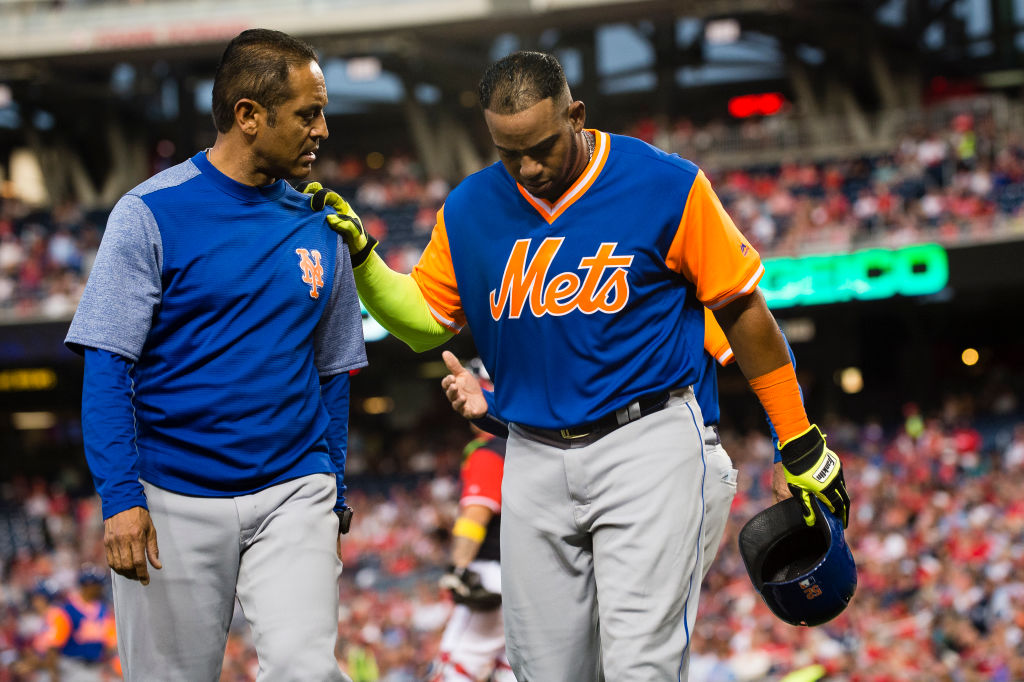 Report: Mets Planning On Keeping Mike Barwis As Strength and Conditioning Coach Despite Rash Of Injuries

The New York Mets’ 2017 dreams were ruined by a rash of injuries, marking the third consecutive year they have seen a ton of key players miss time with various ailments. Despite overcoming the injury obstacles to reach the postseason the previous two seasons, the Mets simply couldn’t cope with losing so many talented players for extended periods of time this year. In most cases, a rash of injuries like the one the Mets have gone through for the past few years would lead a team to replace most of their training staff in an effort to prevent it from happening again. The Mets won’t go that route as General Manager Sandy Alderson indicated he is planning to retain controversial strength and conditioning expert Mike Barwis, Mike Puma of the New York Post reports.

WASHINGTON, DC – AUGUST 25: Yoenis Cespedes #52 of the New York Mets is helped off the field by Mets head athletic trainer Ray Ramirez after an apparent leg injury in the first inning against the Washington Nationals at Nationals Park on August 25, 2017 in Washington, DC. (Photo by Patrick McDermott/Getty Images)

Barwis has come under fire from Mets’ fans due to his training methods, including a notable video segment for ESPN which showed Yoenis Cespedes doing 900 pound squats as part of his off-season training regimen. Cespedes has dealt with leg issues all season, missing two months of action early in the campaign before injuring his hamstring again last month, an injury that shut him down for the season. Mets’ officials insist that Barwis had nothing to do with that video segment, indicating to Puma that Cespedes himself suggested he do the squats for the ESPN piece against Barwis’ advisement. Alderson also defended Barwis, noting he is a key piece of the organization’s conditioning team, and noted that Barwis had nothing to do with ace Noah Syndergaard’s health problems. Syndergaard reportedly worked out independently near his home in Texas and showed up to spring training with 17 pounds of muscle added to his frame. The end result of that added muscle ended up being a partial lat tear for Syndergaard, who hasn’t pitched for the Mets since the end of April.

Team officials also point out that the Mets went to the World Series in 2015 and made the playoffs again in 2016 under Barwis, therefore suggesting he isn’t the problem with injuries. Cespedes has also expressed his faith in Barwis and indicated he is planning to change his off-season training program to focus more on agility then pure strength. That is all well and good, but keeping the strength and conditioning expert for a team that has ranked among the league leaders in games lost to injury over the past three years is not a smart move.

The Mets have begun making changes to how they handle injuries, such as issuing daily updates to the media about player issues and reportedly trying to improve communication between their various departments. None of that matters until the Mets can keep their best players on the field and out of the training table. Team officials can say all they want about how Barwis, team doctor David Altchek, and trainer Ray Ramirez are highly respected in their respective fields, but it doesn’t make anyone feel better when big time players are spending weeks and weeks at a time on the shelf. Until the Mets show they have figured out how to handle injuries better, there is no reason for anyone to expect them to simply stay healthier next year. There is a famous saying about how the definition of insanity is repeating the same thing over and over again but expecting different results. The Mets might well be insane with their approach to strength and conditioning.