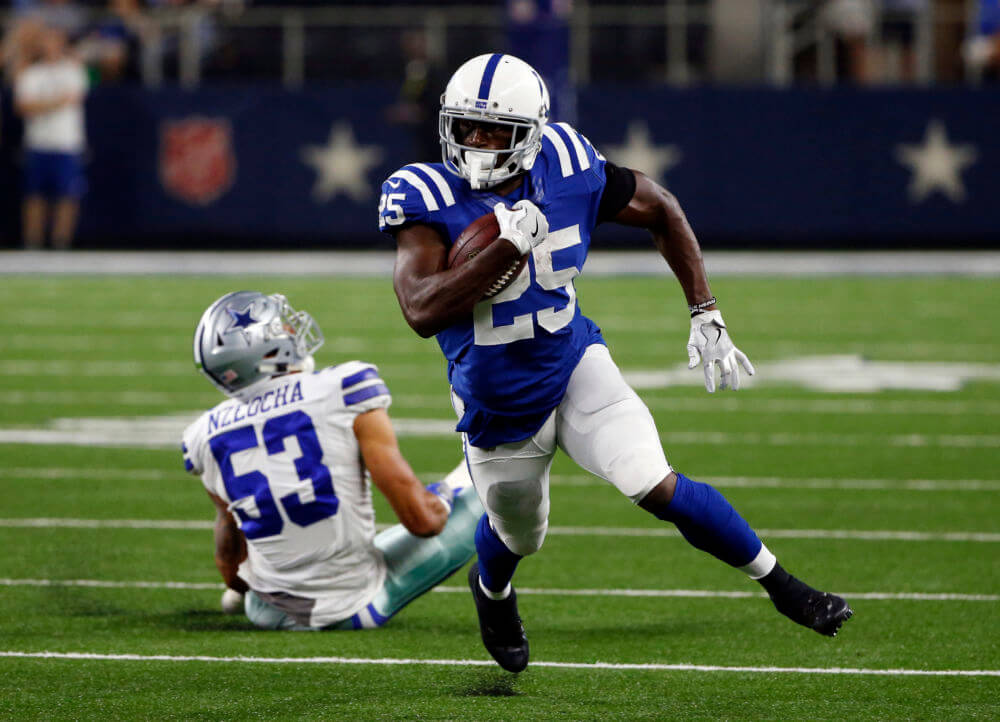 Hello Colts fans. It’s good to be back, even though the team appeared to be thinking about something else last Sunday. What a disaster of a performance.

Let’s dive in and see what’s on your minds.

Q: After Ballard’s comments about Morris’ “inconsistency,” and then seeing Tolzien “horse poop” the field last weekend (you can edit that part however you like), do you think there’s something we just aren’t seeing? Or did they just make a REALLY bad decision to cut Morris over Tolzien? – Kimberly Anne

As fans we’re going to miss things coaches see, but for my money I never want to see Scott Tolzien take another snap for the Colts. Everything about his game is ugly. It’s not like Andrew got hurt 2 days before the first game and they had to rush to get Tolzien ready. He’s been throwing to these guys for months. There was absolutely no reason why everything should’ve looked as bad as it did Sunday. Embarrassing.

As for Morris, there’s no telling how he’d have performed in a real game, but I can’t imagine he’d have been much worse.

Q: How long do you think Luck will be out and what is our ceiling without him? – Nick

Without reading the medical reports or assuming he’s not going to sit for the season, I’m guessing Luck will be back for Week 5. You don’t want him returning Week 4 at Seattle. I don’t even want to imagine the pounding he’d take (or whoever the QB is that day *will* take). Maybe that’s why Pagano mentioned the 49ers in his presser after the loss last Sunday. He’s already thinking – and praying – ahead.

Q: Hatin’ ain’t productive. What have we got on this team that’s good, and what are some areas where tangible improvements can realistically be made? – Stan

Off the top of my head, Marlon Mack. The Colts have a player with this kid, folks. He is going to be exciting to watch. The defense is better, though far from great (injuries have hurt in this regard) and should improve as guys like Vontae Davis get healthy and guys like Malik Hooker and Quincy Wilson gain experience. The biggest obstacle the team faces isn’t injuries or Luck being out; it’s the guy on the sidelines calling the shots.

Q: When we gonna get rid of Coach P? – Catherine

The sooner the better, but it’s been a long time since Irsay fired a coach during a season.

I’m convinced Charles is a great guy. I think he’s probably a good secondary coach. He is not, and will never be, a good head coach. The same shortcomings in his ability from his first season are still there. Some of this is on the players; You’re professionals, you get paid to play, so show up ready. But consistent slow starts over several years scream lack of coaching.

And don’t even get me started on why they didn’t challenge the Mack TD in the first quarter.

Q: Do the Colts have a plan to stop me from going insane if I have to deal with the bull**** I dealt with at work today? – Matt

Lol. I’d get used to more bad days. Charles couldn’t scheme his way out of bed.

Q: Should I start Gore over Hyde this week in FF? – Chuck

Lol. As long as Tolzien is under center, I wouldn’t put my faith in any Colt for FF other than Doyle or Hilton. Gore probably won’t net you but about 6-7 points. Robert Turbin tends to vulture the short yardage TD’s, and Marlon Mack will be more of a factor. If your team can survive Gore putting up 6-7 points, go for it, but I wouldn’t do it.

Q: Would I be a better coach than Pagano? – Jacob

You, me, Helen Keller, you name it. I am flat out sick of Charles Pagano. I just can’t anymore.

I’m pretty sure one of you forgot to tithe while at church, or didn’t help an old lady cross an intersection, or kicked a puppy or something. I’m pretty sure this is all our fault…if we were all named “Ryan Grigson” or “Charles Pagano.”

Q: Who will take the most snaps this Sunday? – Jodi

During his presser today (Friday) Charles seem non-committal. If it’s Tolzien, the Colts are doomed. Am I suggesting Jacoby Brissett (Mmm, brisket) is going to be great? No, but he is better than Tolzien and they have a much better shot to win with him. I never want to see Tolzien take another snap for this team.

I say all of this and Tolzien will throw for 3 TD’s and 375 yards Sunday. Ugh.

Q: Realistically, how many wins can we expect this season? – Amy Louise

This just kills me. The team isn’t good, but it is better than last season’s bunch, and the schedule is friendly. This is what really hurts with Luck and someone like Vontae Davis being out. They had a real shot of getting off to a great start and establishing a lead in the division, and poof, it’s gone.

My answer really depends on when or if Luck comes back. If he’s back by Week 5, the season may not be completely lost. I’m not sold on this though.

Q: I’ve believed in blue, built a monster, done things for some shoe, and recently began forging stuff. No dice. What the hell? #ColtsForged – Marcus

I think your problem is you never made it personal. Looking forward to you replacing Denzelle Good on Sunday though.

Seriously though, the #’s are terrible. Who on earth gives these things the green light? Colts Forged? Get all the way out of here.

Admittedly, I did like the video to the Colts Forged thing. The use of the Mayflower truck is Grade A trolling.

Please note, the video may open in another window.

The line about the daughter’s marriage slays me.