Facts and Feats from The Greatest Run in American League History 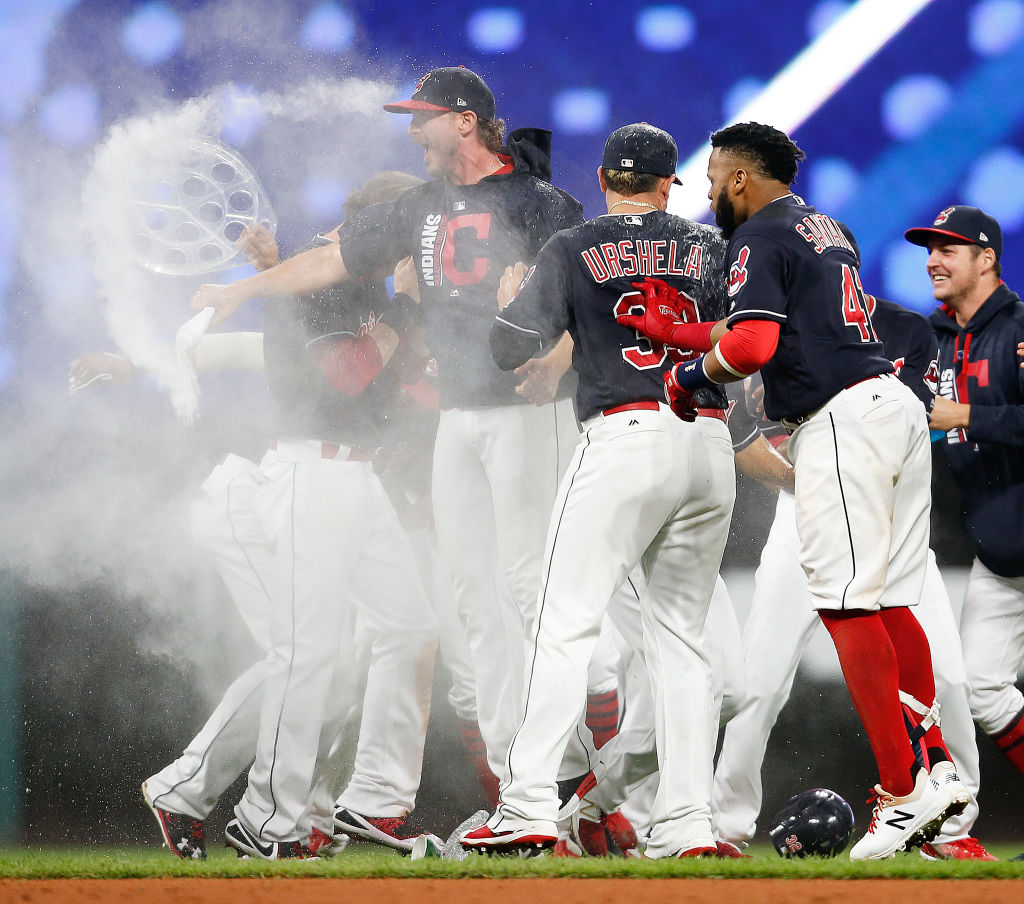 Facts and Feats from The Greatest Run in American League History

On August 30th, the Indians would have been happy with a split. They went into the first of two games against New York up 6.5 in the Central, a comfortable lead with a month left, and had already won five straight including a sweep of Kansas City that essentially removed them from contention. They were in the midst of 40 games in 40 days with another double header scheduled two days later, following the only scheduled off day during that 40 day stretch that hadn’t already been filled with a make up game. They only had to win one game against the Yankees to win both the series and the season series.

They didn’t just win one. Then, they didn’t win just one of the two games against Detroit on September 1st. Instead, after sweeping the Royals and Yankees, the Indians swept four from the Tigers (outscoring them 28-4), then four from the White Sox, three from the Orioles and three more from Detroit. Add a single win against Boston to begin the streak and one against KC to end it and the Indians just rattled off more wins in a row than any other team in American League history, second to only the 1916 Giants in MLB history.

Obviously, to have that kind of success a lot of things must come together. First, you need a starting rotation that includes five pitchers who give you a chance to win every time out. In this case, the Indians actually used seven thanks to pitchers returning from the disabled list and the pair of double headers. You also need a consistent offense, something that didn’t exist early on in the season, but certainly did during the streak. If you score enough and have a great rotation, you don’t necessarily need a great bullpen for an elongated winning streak, but the Indians had that as well.

The entire offense performed admirably (you don’t get a 105 run differential in 22 games just by pitching well), but the Indians leading MVP candidate deserves a section to himself.

The Rest of the Offense/Defense

The lack of close games is really what really makes this streak impressive. The first four games were won by a total score of 33-6 with three shut outs against Kansas City. These four games and ten others were decided by four or more runs with five games won by at least nine. This utter dominance shows how unfluky this streak really was. While there was certainly some luck in the opponents, particularly playing Detroit and Chicago in exactly half of those games and in the offense coming together at the same time after being largely all or nothing early in the year, there was little question during the streak itself that the Indians would keep winning.

It wasn’t until the final game that the Indians were even losing for more than an inning in a game and they didn’t need extras until that last game against Kansas City as well. While there’s certainly nothing scientific to it, it’s interesting how the streak eventually petered out. Just like the shorter streak in 2016, it was an extra inning win the night before that pushed the Indians to the edge. The previous AL record holder for consecutive wins, the 2002 Oakland A’s had a similar fate. They also won regularly by large margins, but the final three games of that streak were walk off wins before they finally lost to Minnesota. The last win was 12-11, the most runs allowed in a single game at any point during the streak. For the Indians, the last win was 3-2, tied for their third fewest runs scored during the streak.

In any event, the 22 straight wins vaulted the Indians from 69-56 with a 4.5 lead in the division to 91-57 and a 13.5 game lead. Instead of worrying about the division now, however, they are looking for home field advantage throughout the play-offs.