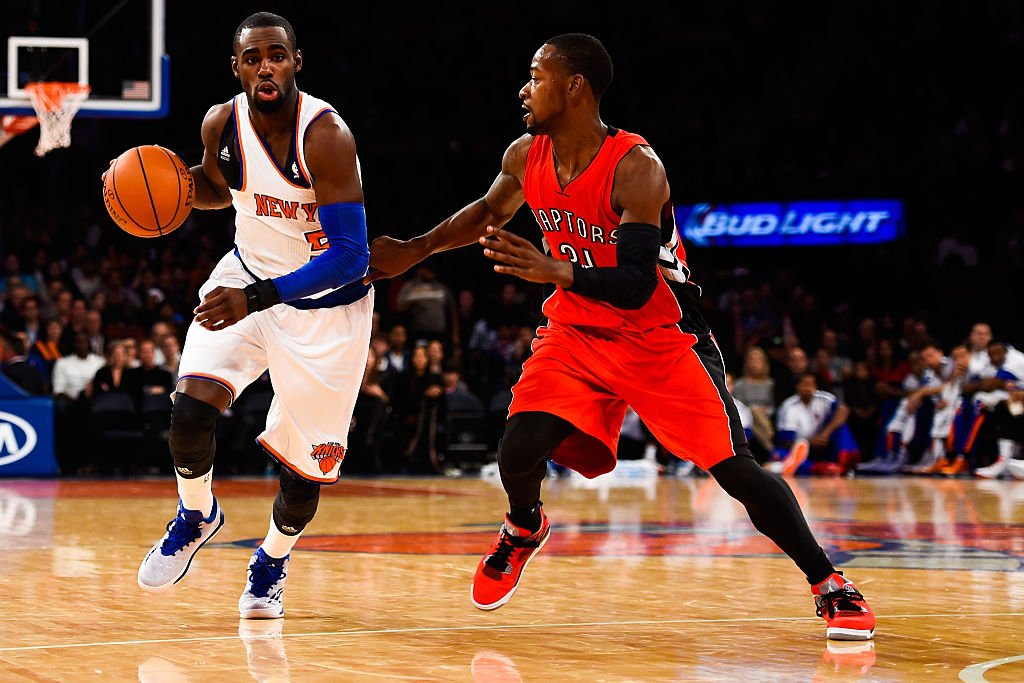 When the Knicks fired Phil Jackson and slotted Steve Mills in his place as President of Basketball Operations, there was supposed to be an obvious change in the guard. In addition to an improved and more loyal culture, there were (assumedly) going to be smarter decisions being made. The bloated and unnecessary contracts, much like the one awarded to Joakim Noah in the summer of 2016, were supposed to be a thing of the past, especially with the Knicks going younger and building from the ground up.

Re-acquiring Tim Hardaway Jr., a player whom Jackson adamantly and openly criticized and subsequently discarded, was a clear message that the organization would be doing things differently. Signing him to a surprising four year, $70 million pact didn’t exactly send the same message of change.

Of course, Hardaway Jr. has very different circumstances than someone like Noah. He’s only 25 years old, and undeniably has plenty of promise and the best years of his career still ahead of him. The young gun has battled injuries here and there during his career, but after playing in 79 games last season, looks to be as reliable as ever. What’s more, Hardaway Jr. is embracing his return to New York by working tirelessly and readying himself to take on a more prominent role. This offseason, it’s been well documented that he’s been working out and training with popular and renown trainer Chris Brickley. All the while, he’s been competing alongside the likes of teammates Carmelo Anthony, Lance Thomas, and Frank Ntilikina, in addition to NBA stars Russell Westbrook, Chris Paul, and James Harden. There hasn’t been a lack of talent for Hardaway Jr. to stack up against.

Having so much potential often means a player hasn’t realized his own just yet. Though Hardaway Jr. continues to improve, $70 million is a rather eye-popping number for a player who some around the league still consider to be relatively unproven. As a restricted free agent, the Hawks were said to be considering retaining the guard’s services for more of a ballpark figure around $45-$50 million for the same contract duration. Adding $20 million plus to any potential offer certainly helped the Knicks deter Atlanta from attempting to match their offer sheet. New York didn’t stop there, however, also awarding Hardaway Jr. with a player option in the fourth year. They placed a trade kicker in his contract and their offer also stipulated that 50% of Hardaway Jr.’s annual salary is paid out by October 1st each year. These are all very steep measures to even consider accommodating a player of Hardaway Jr.’s status with.

The Hawks didn’t want to come anywhere near such a contract, so it’s clear the Knicks’ strategy to acquire him worked. But this also begs the question of, was it really all necessary? Could New York have still acquired him for less money or fewer accommodations? As it stands, the team will now need to pay Hardaway Jr. and work under all the same stipulations that they implemented to scare Atlanta off.

Still, there are people around the league who applaud the move and credit the Knicks for finding someone who fits into their desired identity.

“They got their guy,” one NBA scout told KnicksJournal.com. “They knew who they wanted and he fits well, so what’s the difference?”

Hardaway Jr.’s contract isn’t as daunting when compared to those of similar players around the league. In a perfect world, he plays out his entire contract in New York and performs really well. In addition to being a smart on-the-court acquisition, continuing his maturation could keep Hardaway Jr. in the Big Apple and help the Knicks avoid having to convince another team to take him on after the trade kicker increases his salary. If he can validate what the Knicks see in him on the court, the 25 year old will mitigate the financial concerns that come with his contract.

With that said, there is plenty of good when it comes to bringing Hardaway Jr. back. For starters, it’s an acknowledgment of his still evident potential and the idea that perhaps the Knicks shouldn’t have given up on him so quickly. Hardaway Jr. has grown tremendously over the last couple of seasons, becoming more potent offensively and improving his basketball IQ on the defensive end. What’s more, Hardaway Jr. also proved himself extremely dedicated to his craft by embracing his development with assignment time in the D-League. Last year, he had a very steady campaign, logging 14.5 points in just 27.3 minutes per game and boasting an impressive shooting line of 45% from the field, 36% from deep, and 77% from the line. His RPM was also in the positive by season’s end.

Depending on what happens with Carmelo Anthony this coming season, it’s very possible Hardaway Jr. could flirt with an 18-20 point per game average. He’s certainly efficient enough for it and only figures to blossom in a more central role on the Knicks. On the off chance that he comes off the bench in favor of Courtney Lee, the youngster could even compete for the Sixth Man of the Year award.

Either way, he’s a very solid signing for a number of basketball reasons and his return couldn’t come at a more opportune time as the Knicks look to make a shift. Perhaps his contract isn’t as bad as some perceive and for those that still view it in a negative light, it’s up to Hardaway Jr. to let his play prove his worth.