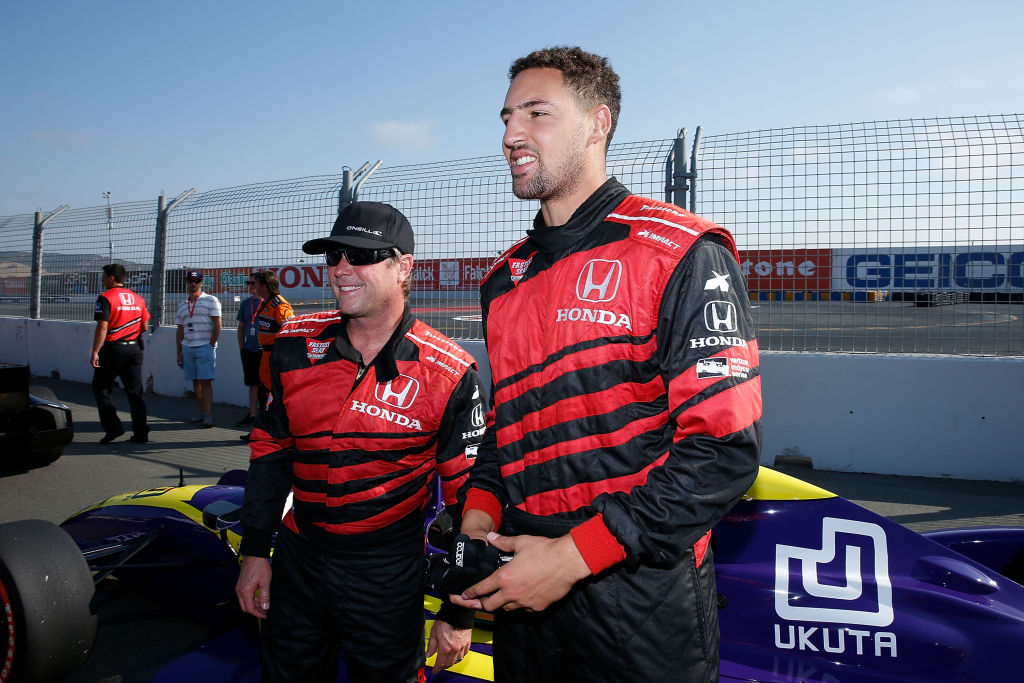 The video was taken by @rcasasjr.

First he got in a two-seater Indy car driven by Mario Andretti, then took a Q&A and even took a couple questions from the crowd.

Here’s a transcript of the Q&A:

– On being at the Grand Prix: “I’d rather be racing, though, that looks like a lot of fun. I don’t know if I could handle the clutch, man, I might mess up the transmission.”

– On enjoying the raceway: “I never felt speed or power quite Iike that, so I got a newfound of respect for these guys, how they know the track so well and how they can navigate through all these cars. It’s really unbelievable. It’s a different type of athleticism, but you have to have the mind, you have to have the foresight to see it in front of you…I just like the smell of the track, the gas, the noise, the cars, the power. It’s pretty amazing.”

– How about @champagnennuts (Klay’s father Mychal Thompson)? “Champagnennuts, he’s on the couch, man, he never leaves the living room. He would appreciate you asking for him, though…We usually just talk trash, though. He thinks his Laker teams would’ve stomped us…’We’re too big for you guys. All you guys do is the finesse game, shoot threes.’ I’m like, ‘Man, we’re quicker than you’ and all this…When I first came to the Warriors he tried to tell me, ‘Klay, I don’t know if you’ll ever be able to experience a championship like I did’, and I proved him wrong. He’s very proud of me. He’s very proud of where this organization has come from…I grew up in Los Angeles and the Warriors were kind of an afterthought. Now when I go back home I’m seeing so many Warriors fans. I’m seeing Warriors fans across the country, across the world… We’ve got the best fan base in basketball.”

– On going back to China for NBA preseason: “When you’re good in the NBA — we have such a fan base in China, we gotta go show them love.”

– On the Warriors receiving their championship rings: “Anytime you get a ring in whatever sport you play, if you’re crowned a champion, that lasts for an eternity.”

– On the upcoming season: “We got all the pressure to win again. It’s a great position to be in. I think our biggest competition is really us. We can’t get complacent. We can’t get fat and lazy just because we got a couple rings. We want to build a dynasty. We want to have four or five or six rings. We don’t want to just settle with two. We want to be known as one of the greatest dynasties in not only basketball, but all of sports, hopefully, one day.”

– On losing to the Cavs in 2016: “That sucked. That was the worst moment in my sports career…especially when you feel like you should’ve had the parade in Oakland, but you see it in Cleveland and you’re just kicking yourself, but now we’re setup for hopefully the next four or five years to do some real damage, like I said, leave a legacy.”

– On the turnover in the NBA: “We really look at the rest of the NBA. We really think there’s no one who can really compete with us if we bring it. I mean, there’s a lot of turnover in the NBA right now. We saw Kyrie in Boston, which is weird. I still think Cleveland’s going to be our second biggest threat, and the Spurs.”

– On his 62 points with the emcee saying, “No one gets hotter in the NBA than this guy.”

Klay: “Steph (Curry) might have something to say about that.”

– On the ESPN player rankings: “Dwyane Wade said it best. He said, ‘You know what? Player rankings don’t win you championships.’ I’d rather have the hardware than be a Top-Five, Top-Ten player, you know?”

– On the Warriors possibly being better this year than last year: “You know, 73 wins, maybe we can get 74 one day, man. That was an amazing year only to have a single digit in the loss column. It was unbelievable. I don’t know if (73 wins) will ever be touched again, but if there were a team to do it, I think it would be us. And instead of going 16-and-1 in the postseason, how about go 16-and-0. Why not?”

– On the take before last year that the Warriors would have to make individual sacrifices: “I had career highs. Kevin (Durant) was the most efficient he’d ever been and he was just attracted to the way we played…If you’re open you shoot it, if another guy’s open, you pass it to him. It’s very simple. And when you have the talent we have and the coach like Steve (Kerr) who over-simplifies things — and he played with guys like Michael Jordan, Tim Duncan, David Robinson and Scottie Pippen — he learned from Phil Jackson. So Steve knows how to manage egos, even though we don’t even have that many egos on the team. If you want to great, you’ve got to have somewhat of an ego. You can’t tell Mario Andretti he’s not the greatest. In his mind he thinks he is. Just like, probably, Steph and Kevin and me and Draymond (Green). So you’ve got to play with that chip (on your shoulder). We all have something to prove. At least you have to convince yourself of that if you want to be great.”

– On Kerr and playing with joy in his system: “If you came to our practice, if you saw the first twenty minutes of it, you’d think you’re watching a kindergartener’s practice. We’re just throwing up half court shots, kicking the ball around, throwing the football around. We’re just having fun. You’ve got to keep it light, man. We play over a hundred games a year so you can’t take it too seriously, although basketball will just take over your whole life. I’ll never forget what Steve told me. He’s not only a great coach, but he’s just a great leader. I remember he told us after Game 7, right in the locker room after we were expecting to pop all these bottles, enjoy the night, a very somber atmosphere. Steve came to the locker room and just said, ‘If this is the hardest thing you’ve ever had to go through, you’ve had a pretty easy life.’ When he said that, I realized, ‘That’s a good point, Steve. We’ll be better from this.'”

– On enjoying the last few days before training camp to start: “I love to fish. I like to golf. I love the beach. That heat wave was lovely for awhile. (Responding to someone in the crowd yelling, ‘Rocco!’) Got Rocco with me. So I’ll probably just get some beach days in, play some golf, hopefully beat Steph one time. I’ve yet to beat him.”

– On Curry’s recent golf scores: “It’s annoying. I can’t beat that guy at anything, whether it’s shooting or golf or ping pong. He’s just so talented…I’m better than Andre (Iguodala). He tries to tell me I’m not.”

– On checking out the Grand Prix: “I know I’m probably going to upset some (San Francisco) Giants fans here, but my little brother (Trayce Thompson) is with the (Los Angeles) Dodgers. If he can get a ring the same year I got a ring, that would be special. Hopefully he can get up to the Bay and play with the Giants or (Oakland) A’s one of these days, but blood’s thick in the water so I’ve got to root for the boys in the blue right now. Sorry to all my Giants fans out there, but gotta go with the little bro.”

– From an audience member, on Klay’s favorite football team: “I’m an Oakland Raiders fan. I just want them to bring back a championship for the Bay before they leave, unfortunately. I live right by where I can see the stadium, so I love going to Raiders games and I’m really rough of them. When I was a rookie, they weren’t very good and now to see where they’re at is really special. They’re going to do big things this year.”

– From an audience member in whether Klay knew he would be in the NBA someday: “That’s a good question. I was very fortunate because my dad played for a long time. I wanted to follow his footsteps. I had two brothers and we would beat up on each other a lot. It didn’t matter what the score was, whether it was football, baseball or basketball. We were always very competitive and I think that’s what propelled me to the NBA, because I learned to be tough at a young age. There’s nothing like playing your big brother at anything. You want to beat your brother in everything. I got that competitive drive from competing with them, but I realized I had a chance when I was, like, eighteen years old. I was a freshman in college. I actually remember playing Arizona State. James Harden was supposed to be, like, a Top Five pick and I was just killing James this game. I thought, ‘If James can be Top Five, then hopefully I can do this against him in the League one day…That’s when I knew I could make it.”