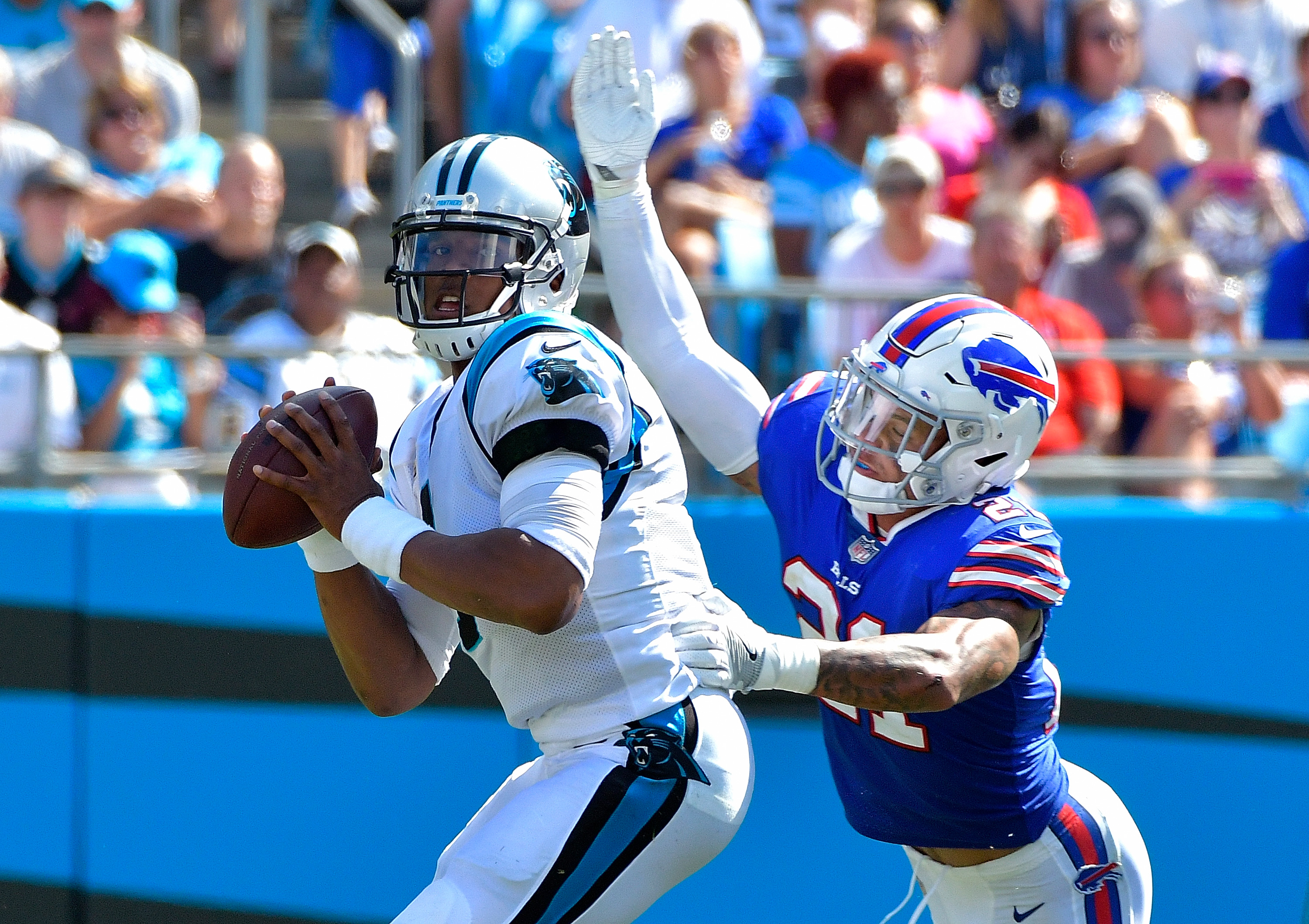 1) That was ugly. Bills/Panthers kind of felt a little like last week’s Bills/Jets game where one team thoroughly outplayed the other team, but the scoreboard for most of the game didn’t indicate it. It also felt like the 6-3 Bills/Browns timeless classic from 2009. And, hey, who didn’t have a flashback on that final drive to Tyrod beating the Titans from 2015 after the offense struggled. Yeah, we have TONS of shitty games to hit the Deja Vu button on any given Sunday. The Bills offense was trash and if it weren’t for the defense, the scoreboard would have been out of control. This is what a lot of people predicted: a defense that would carry the team, while the offense would struggle.

2) I’ll give the defense credit…I was expecting them to collapse from pure exhaustion down the stretch, but they fought until the end. The Bills had six sacks which was the most they have had since Bills/Jets in November of 2014. They also hit Newton an additionally seven times. The Bills allowed just 2.8 yards per carry to the Panthers which was the 7th lowest Carolina has had since 2012. This is the type of game we’ve wanted since Jim Schwartz left town and the type we all hoped McDermott would bring here. The Bills are getting after the QB and they are doing it via the blitz or just teeing off with their front 4. It is good to see Jerry Hughes/Shaq coming off the edge in a 4-3 instead of the stupid OLB position Rex had them in last year.

3) Jordan Poyer is a fricken stud. Give credit to Doug…err….Sean McDermott for signing him. He’s a jack of all trade defender who plays close to the line of scrimmage and plays well as a center fielder in the secondary. He now has 5 PDs on the season to go along with two sacks. I sense a #Billsmafia fan blowing someone for his jersey in the near future.

5) This is also the first time since 1995 that the Bills have allowed one offensive TD through their first two games. Their 21 points allowed is the 5th fewest in team history through the 1st two games. Defense has been money so far this year.

6) Now that we’ve given the defense enough credit, let’s take a dump on the offense. This was NOT a good offensive performance across the board. Yes, everyone’s going to pick their area to bitch about, but I believe it falls on all 11 guys. Everyone was terrible. The offensive line didn’t protect Tyrod or open holes for McCoy, Tyrod missed WRs, and the WRs couldn’t get separation. You can’t win games when your offense has 8 drives of 6 plays or fewer.

10) Tyrod Taylor is fucked. I’ve been saying since day 1 how Tyrod isn’t the type of QB who is going to make his passing weapons better. It is the other way around and that’s totally fine in today’s NFL. I don’t know why it has to ALWAYS be how the QB has to do everything while the WRs are just tackling dummies. Unfortunately, it is the latter here. Seriously, I gotta see Andre F’N Holmes as his go-to-guy on the final drive

Not having a legit #1 WR target kills this offense. Not just through the air, but in the running game since teams aren’t worried about Zay Jones or Andre Holmes burning them. Funny, but I do remember Tyrod Taylor throwing the ball down the field when Sammy Watkins was healthy and all of a sudden the deep ball doesn’t seem to be there. I wonder why???? Maybe don’t trade your best WR and sign 20 fullbacks!!!

[Editor’s note: It’s okay. When you throw to your fullback rolling away from throwing arm of QB, fatbacks gotta get shamed.]

11) Of course, Tyrod gets blame as well. He is the QB. Having 125 yards passing is pretty fricken awful. He missed throws out there and he didn’t start throwing the ball down the field until the final drive. However, since I just saw a week of “HE’S NOT GETTING HIS AWESOME WRS INVOLVED ENOUGH!! … mixed in with some shitty Sully column where Tyrod hasn’t been good on the road when the stats say he’s about the same….or that Tyrod didn’t see an open Nick O’Leary running free when the play call is for him to roll to the opposite side and throwing across his body would be a bad idea….or the shitty fucking mentions off this Tyrod Quote…which, BTW, was a drop that Zay Jones will hopefully learn from, but TYROD WASN’T NICE ENOUGH!!….then you see why I don’t have to shit all over Tyrod because all of you guys are going to do it until they cut him in March. Your minds are made up and you can’t wait to burn your #5 jersey.

I Can’t wait until Tyrod does well in Arizona next year and we are stuck with Peterman checking down to your favorite fullback (Sorry, Rich).  Yeah, Tyrod isn’t the answer..but the Bills sure as hell haven’t supplied him with reasons to be the answer.

12) The Bills have had 41 games where the QB has had 125 yards passing or fewer since 2000. That’s the 5th most in the league over that span. Seriously, how the hell did we survive those games?

13) I think Coach Clapper is saving his timeouts Marcell Dareus when he is late for a meeting. I kid…But, seriously, his game management today wasn’t very good in the 4th quarter.

15) The Bills had just 10 first downs which was the 2nd fewest they have had in a game since 2000. Seriously, what a shit show the offense was.

16) Final word: The Bills aren’t in first place anymore [Sad face]. I think we are going to get a lot of days like this where the defense holds strong for most of the game, but the offense isn’t going to come through. So, get ready for moral victories and a fans clamoring for QB Mayo. Can’t wait…