SING IT: We Need A New Arena! 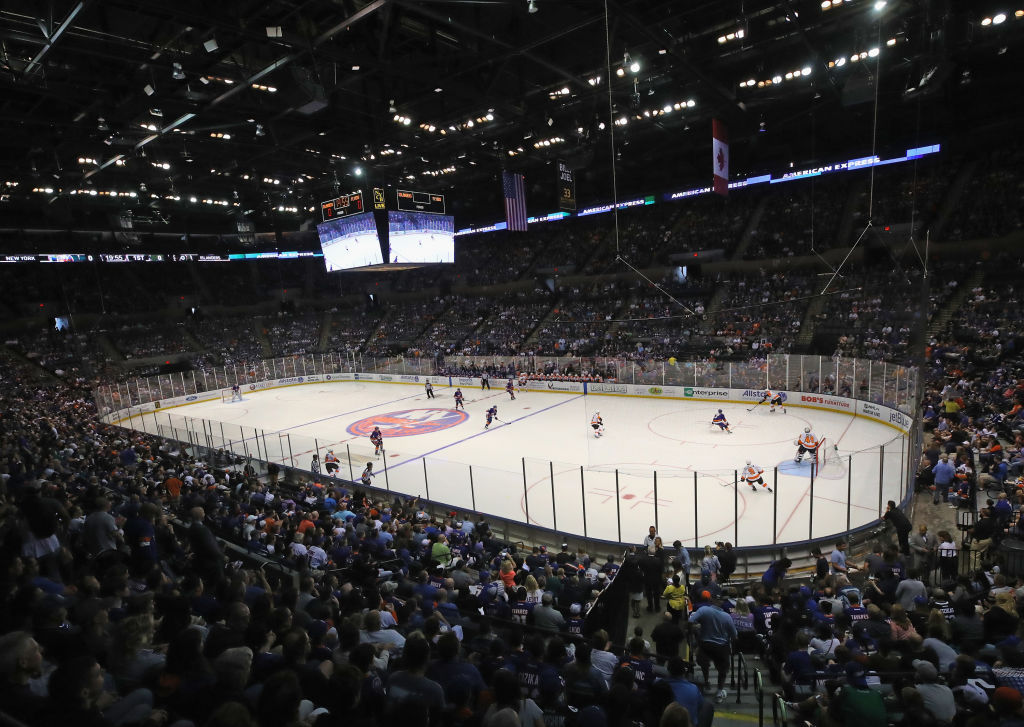 SING IT: We Need A New Arena!

To be honest, watching the Islanders take to the Nassau Coliseum ice and win a meaningless game in dramatic fashion before 13,000+ on an NFL Sunday was kind of, sort of neat.

It was also mass masochism for fans who envision an LIRR-to-Brooklyn-less hockey shrine beyond this day — unless of course the team somehow winds up playing there on a temporary basis if the Belmont project for a new arena comes to fruition.

Until the game was announced months back, no one thought the Islanders would play a game there again.  But there was Billy Smith, Bobby Nystrom and Clark Gillies being chased for autographs. There were Reebok jerseys, hats and such at deep discounts. The NHL Centennial Celebration tour truck boasted cool tech and Islander artifacts, while Lord Stanley’s Cup showed up to spawn a line that went seemingly to Hofstra.

Despite the sleek additions, coats of paint and new inner concourse around the rink, not much had changed.  Paul Cartier was there with his keys.  You could bask in the Bud-and-Marlboro, acid-washed 80s bombasticated glory of Long Island via the music selections – Madness’ “Our House”, Twisted Sister’s “We’re Not Gonna Take It” and Foreigner’s “Feels Like The First Time.”  Somebody had to have a Trans Am in the tailgating sea of cars.

It all added up to the vibe of a audition/dress rehearsal for this building that everyone loves but can’t decide how to best develop.  I still loved it, but I felt like I DeLoreaned myself to a time where I couldn’t alter a thing about its course.

And there is still no LIRR stop, nor dearth of luxury seats that help sustain modern sports economics.

This is a team that is running out of next years and destinations to cement a home rink not fraught with compromises.  They have one of the best players in the world in his walk year, who apparently loves it here.  But can you remember any team in any sport that have as many eggs in the basket with one player as the Islanders do with John Tavares – on top of this kind of arena situation?

It is a going to be a fascinating season to witness just for these two stories alone, but it got me to thinking about cumulative controversies and unmatchable glories that this team has had.  It’s quite the parabola.  The sagas the Islanders fan endures is fairly unique to sports. And it’s always in a little engine that could mode, despite being fully spoiled by the locomotive that was the under-credited 1980s dynasty.

I just could not help but see in my mind an infographic collage like this that we all sometimes see on t-shirts and posters but in song form. Specifically one by Long Island’s own Billy Joel.  So out poured the memories great and bad for a syllable-for-syllable tome you can proudly sing along to, Long Island! Maybe you’ll like this annoying song better now…

We Need A New Arena

Spano, The Drive For Five, OT goals by Bobby Ny

We want a new arena

It was always brimming with the Isles winning

We want the Coliseum

No, we didn’t fill it, but then Nassau killed it

David Volek, Ted Nolan, Dubielewicz does all he can

Playoff race, Goal Shawn Bates, Meet me at the Lighthouse!

Clark Gillies pummeled guys, all the way to Oceanside

All the way, four years straight, what else do I have to say?