Your Morning Dump... Where Kyrie is everyone who's ever sat through an hour of First Take 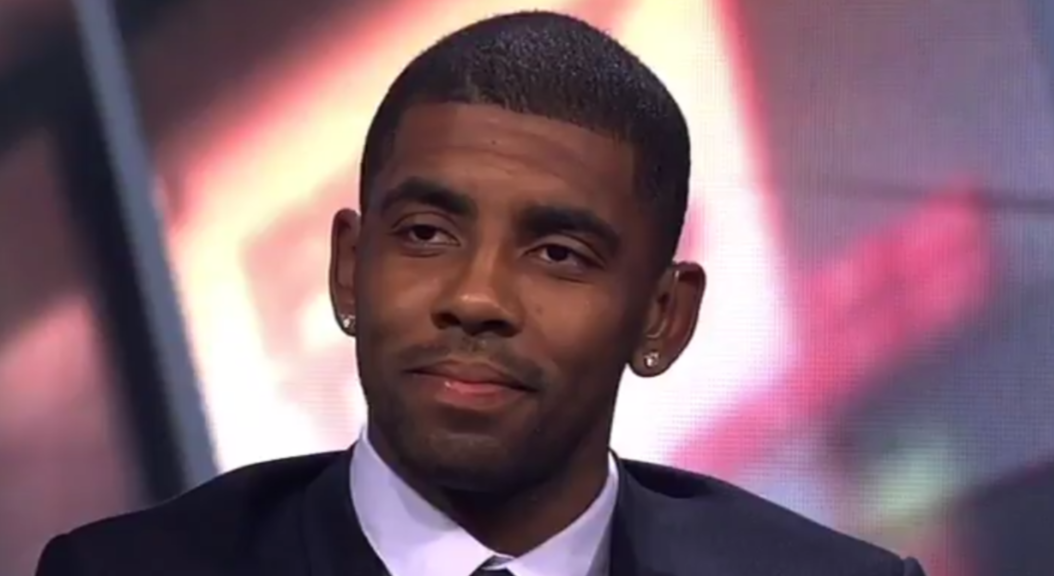 Your Morning Dump... Where Kyrie is everyone who's ever sat through an hour of First Take

Look at that face.

That’s the official face of “I have seen enough First Take.”

First Take did not invent the ‘anchor takes forever to ask a stupid question’ interview style, but I do believe they’ve perfected it.

Take, for example, this exercise in circumlocution by Max Kellerman:

The homie Max Kellerman bout to have a nervous breakdown trying to get ONE answer out of Kyrie. Dude is dodging everything pic.twitter.com/IL3P97jPyA

Or this triumph of bombast by Stephen A.:

At any rate, there were some interesting nuggets from that interview, beyond what our own John Karalis summed up yesterday.

Irving: “When you think about the journey, and you also put things into perspective for what they really are, it’s a truthful environment. And I wasn’t getting that (in Cleveland). And that’s where it really stands.”

Smith: “When you say it wasn’t a ‘truthful environment,’ is that pointing to the coaching, Tyron Lue? Is that putting to the GM, the ownership? Just to be clear.”

Irving: “No. It’s pointing to the perspective that I know exactly what I want. And I want to be happy, and perfect my craft in doing so.”

Methinks Irving has been reading Kierkegaard. Without question, and without pointing a finger at any one person in particular, there is a difference between how things are done in Boston and how they are done in Cleveland.

Cleveland is a circus revolving around a clueless prima donna who happens to be exceptionally good at basketball.

If you have aspirations to be ‘woke’, if you want ‘authenticity’, you’re going to slowly go mad in a place like Cleveland. And you can say that without singling anyone out for particular blame; it’s a combination of factors–you have a terrible owner, a star who is apparently oblivious to his own hypocrisy, and a collection of individuals stretched between them whose day-to-day existence is at the mercy of the moods of these two figures.

We don’t know if he can lead a team deep into the playoffs because he’s had James by his side. We don’t know how much he can lift his teammates because James always took care of those responsibilities. We don’t know how great Kyrie Irving is because, recently, we’ve only seen him in a role he doesn’t even like.

When asked how he’ll be different in Boston, Irving replied, “Actually playing point guard, which is very, very much exciting. Getting that thing on the break and allowing Gordon (Hayward) to have the space around him as well, and allowing Al Horford to make plays as a big, and having an offense that’s not necessarily dictated just on me isolating. So I’m excited about that.”

Going along with his comments about a ‘truthful’ environment was the revelation that Kyrie did not like the role he was asked to play in Cleveland. If he’s being honest and he wants to extend himself, that goes a long way toward easing my concerns with this deal, because I’m right there with Kyrie. I didn’t like the role he played in Cleveland either.

“I don’t think you owe anything to another person in terms of figuring out what you want to do with your life,” Irving said. “It’s not anything personal. I’m not here to tirade anybody. I’m not here to go at any particular person or the organization because I have nothing but love for Cleveland. I have nothing but love for the times that I spent there. It’s nothing about that. There comes a time where you mature as an individual. It’s time to make that decision. There is no looking back from that standpoint. There is no time to figure out how to save someone’s feelings when ultimately you have to be selfish in that in figuring out what you want to do. It wasn’t about me not wanting to win, it wasn’t anything about that. I want to be extremely, extremely happy in perfecting my craft and that was the only intent that I had in all of this.”

And there you have it. There have been a wide variety of conversations on the theme of loyalty and ‘doing what’s best’ over the past few weeks, what with the IT trade & the Ray Allen rapprochement, and this is just another variation on that theme.

Lebron will happily tell you that nobody owes anybody anything in this league, that, after all, ‘it’s just a business.’

At the same time, you have to wonder how clearly he sees the applicability of that mantra in this situation. For the first time in his career, he’s on the receiving end of an “it’s just business” decision. It’s not him leaving Cleveland or Miami, it’s Kyrie saying, “hey man, nothing personal, but I think I’ll be better off without you.”

Page 2: Where the Morrii get their day in court

Prosecutor Dan Fisher said it was a coordinated mission and an “orchestrated attack” after the victim sent text messages to the Morris twins’ mother that angered them.

Defense lawyers insisted the twins did not participate in the attack and questioned the reliability and financial motives of the man who was beaten. Timothy Eckstein, the lawyer for Marcus Morris, said witness statements that form the basis of the case are “entirely inconsistent and incompatible with the truth.”

The Morris brothers are accused of helping three other people beat 36-year-old Erik Hood, who has known the twins since they were promising teenage AAU players.

In youth basketball parlance, Hood was known as a “runner” — someone who connects promising young athletes with representatives and agents in hopes of getting a cut of a lucrative NBA contract, Eckstein said.

He said Hood viewed the Morris twins as his “lottery ticket” after they went on to successful careers at the University of Kansas. They had a falling out while the Morris brothers, who later were drafted into the NBA, were at Kansas.

Frankly, everyone involved in this deal sounds like a real pip.

The Morris kids need to listen to Magic:

Magic Johnson, who played summer ball with Pierce in L.A., was troubled enough by the altercation to counsel “his little brother” about making better decisions off the court.

“I told Paul he was on the verge of greatness. But I also told him he had to leave the street behind,” Magic said.

“I know how hard that is. When I drive my car through my hometown of East Lansing [Michigan], I know every cat on the block. I slow down and I wave, but they know I’ve got to keep on going. They understand.

“I told Paul, ‘Your boys will understand, too. You don’t have to cut them out completely. You can check in with them once in a while. But those choices will decide how far you go in this league.'”

Jimmy's Famous Seafood you guys have the best food in the world! Oh, oops…

So, on the very day that the NBA reddit community blew up over allegations that KD has been sockpuppeting, Kevin Durant more or less confirmed it with a couple of bizarre and subsequently deleted tweets.

Look, KD, you can do whatever you want, but geez, not a good look, buddy. This kind of puts you in Scott Adams territory.

MassLive: Jayson Tatum, Boston Celtics rookie, ‘unlikely’ to be Rookie of the Year because of playing time, per Ainge