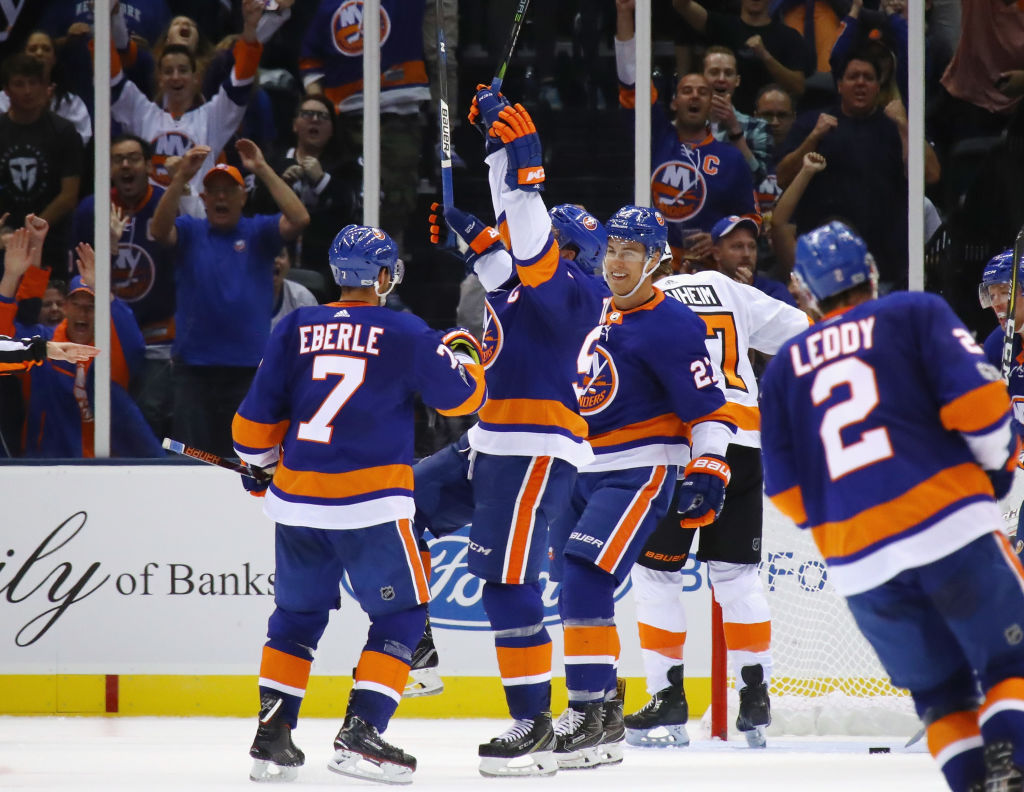 The Islanders went 1-0-1 in their split squad games on Wednesday night. In Brooklyn the Islanders came away with a 3-2 win over the Philadelphia Flyers.

Out in the farmlands of Pennsylvania the second group of Islanders fell to the Flyers 3-2. The preseason thus far has not been too exciting and there hasn’t been the best flow to games as officials crackdown on faceoff violations and slashing calls.

The Islanders had Thursday and will be back on the ice on Friday to host the New York Rangers at Webster Bank Arena.

1. Jordan Eberle got his first taste of what his commute to the Barclays Center was going to be like last night. Up until Wednesday he hadn’t had the chance to check out the Islanders dressing room and facilities in Brooklyn and was looking forward to going through the game day routine.

So what did Eberle think of his first Barclays commute? “It’s not really that bad,” he said. “It’s a good little train ride in and you go right to the stadium. This is a great locker room.” And what about the much talked about ice? “It was great tonight,” he commented.

2. Eberle has played two games now in an Islanders uniform and looked good on the ice. The chemistry is coming along between himself and John Tavares. Eberle recorded his first assist of the preseason on Sunday in Uniondale, helping Tavares to score the Islanders first goal at Nassau Coliseum in over two years. On Wednesday Eberle found himself on the top line with Anthony Beauvillier and Andrew Ladd.

3. Speaking of Tavares, he along with Cal Clutterbuck, Casey Cizikas, Thomas Hickey, and Kyle Burroughs were given the night off. Weight said afterwards they should be ready to go on Friday, when the Islanders play the Rangers in Connecticut.

4. Also absent from action was Michael Dal Colle, who sat out Wednesday night’s game in Brooklyn. By the sounds of it Islanders head coach Doug Weight wasn’t too concerned with whatever was ailing Dal Colle. The Islanders bench boss said he thinks he could have played, but didn’t want to push him in the preseason if he wasn’t 100 percent.

That allowed for Devon Toews to jump into a forward slot for the night and resulted in a first period goal for the defenseman. “He got a big goal, good coach,” Weight said with a chuckle.

5. Toews has certainly earned his praise during training camp. He was already a guy pegged as a player to watch in camp, but his performance since mini camp in July has even surprised Weight at how much he has improved on the ice. Toews will still likely be a player that starts in Bridgeport, but I would not be surprised if he worked his way back up to the NHL at some point next season.

6. Another camp standout has been Mathew Barzal. Now this shouldn’t completely surprise anyone at this point considering the season he had in major juniors, but the elevation in Barzal’s game has been something to see. The 20-year-old notched his second goal of the preseason on Wednesday in Allentown, scoring early in the first period. Barzal has not looked out of place once during a game or during training camp. He has been utilizing the coaching staff around him and it’s safe to say it’s paying off. As of now, if he doesn’t make the opening night roster I would be shocked.

7. The Islanders will need their goaltending if they’re hoping to make it to the playoffs. So far they could not have asked for more from their goaltending early on. Jaroslav Halak had a strong outing on Monday against the Rangers, which included a number of tough saves through the course of the night. Thomas Greiss was solid after allowing a goal less than a minute into the game on Wednesday at Barclays Center.

Eamon McAdam, Christopher Gibson and Kristers Gudlevskis have also been impressive between the pipes. Gudlevskis has been the biggest surprise among those three. Aside from one or two errors he has been solid in both his appearances in net. “(Gudlevski) has been really good in practice, Weight said, “he’s been really good in games. He’s on top of his game. He made some big saves.”

8. It was good to see the officials keep their whistles in their pockets a bit more. It has been well document through the start of the preseason that refs are going to be cracking down on faceoff violations and slashing. On paper that is a good thing, but it got to be a little much on Monday at MSG and even on Sunday at Nassau Coliseum.

Weight was happy about it, and I’m sure the players were too. Brock Nelson had said there wasn’t a lot of flow in those first two games and Weight had said it was tough to evaluate players. You could get the sense that the Islanders coach was not the biggest fan of the crackdown, but trying to put on the best face possible.

Perhaps the crackdown was beginning to cool down on Wednesday, but we’ll see what happens on Friday. One can only hope it calms down a bit.

9. Eberle was one of the guys in the Islanders dressing room who didn’t mind the crackdown. Ironically, he himself was called for slash during the game against Philadelphia. Still the new Islander forward hopes this opens up more room for the skilled players to be more creative. “If you know you’re not going to get chopped in the hands once in a while and fumble to puck it definitely helps,” Eberle told me.

10. There was some chatter on Wednesday and today about the attendance at Barclays Center for the preseason game against the Flyers. It wasn’t surprising to see some of the overreaction on both sides about the announced crowd of 5,042, especially after Sunday’s sellout at Nassau Coliseum. Regardless of what you think of Barclays Center a preseason game is not a fair indicator of how attendance is going to be. Let’s wait until at least October to have this conversation.