Setting up the Rotation for Play-off Domination 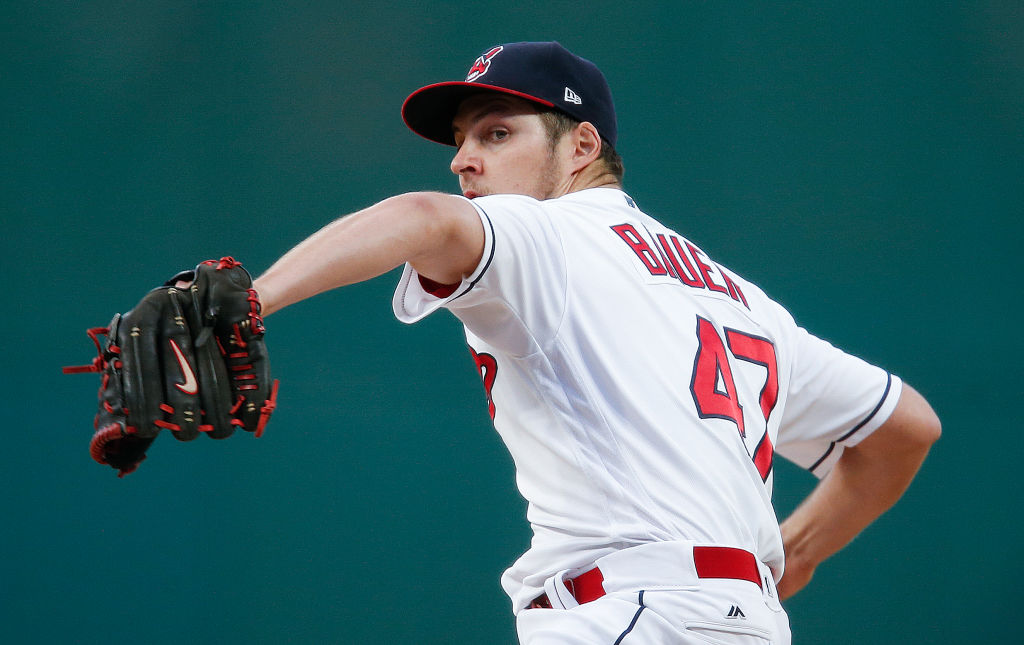 Setting up the Rotation for Play-off Domination

With the Central Division crown locked up, the winning streak over and a healthy lead over the Astros for home field advantage throughout the AL play-offs, the Indians focus is slowly transitioning from winning today to winning in October.

The first sign of this was a shuffle of the rotation this week, starting today with Danny Salazar making a spot start instead of Trevor Bauer pitching on his normal day. After, Carlos Carrasco is still scheduled to pitch on his regular day (9/22), but Corey Kluber will be bumped up back a day as Bauer takes over on 9/23 and Kluber fills back in on 9/24. This will push Mike Clevinger back as well, as he would have been on normal rest Sunday.

While this may seem a pointless accounting of dates and starting pitchers, there is a grand scheme. By pushing Kluber back one day, he will now likely start on September 30th instead of the 29th. This lines him up perfectly to pitch on October 5th, the first game of both American League Division Series, on regular rest.

Everyone following that will be on extra rest, but there’s no question that the Indians will want Carlos Carrasco going in game two. Assuming the Indians hold on to the top spot in the AL, they will play the winner of the Wild Card game, likely either the Yankees, Twins or Angels. No matter who the team is, they will likely have lined their ace up to win the Wild Card game on October 3rd, meaning he won’t be back until either game two of the ALDS (on short rest) or game three on October 8th (on full rest). Whether it is the opposing team’s third best pitcher or their ace on short rest, Terry Francona will want Carrasco going in game two in an attempt to grab the early lead in the series before the other team recovers from their win or go home game on the third.

The rest of the rotation is not quite as easy to decide. The Indians rotation leads baseball in fWAR, not just because of Kluber and Carrasco, but because they’ve had incredible performances down the line. Not just from one through five, but straight through seven as even Ryan Merritt and Danny Salazar, who haven’t pitched regularly, have a fWAR above 0.5. Pending his start today, it’s difficult to enter Salazar back into the rotation despite his great talent, simply because he hasn’t thrown very often in the second half. If he were at his peak, he could easily be the Indians third starter, but thanks to his regular trips to the DL, he will likely be on the roster, but in the bullpen.

As we’ve seen in September, Merritt will likely be out as well. He posted an incredible 1.83 ERA through four starts and it wasn’t all luck as his 3.06 FIP is still second best of those seven pitchers. Despite this, his 3.20 K/9 is worrisome and if he had a larger sample size, there’s no way he would be able to keep up his 0.0 HR/9. The Indians have made it clear that he ranks 7th out of the seven pitchers and his repertoire doesn’t fit in the bullpen well. Barring injuries like the ones that saw him pitch in the 2016 ALCS, Merritt won’t be on the roster at all this postseason.

With those two out, the next question is should the Indians use a three or four man rotation during the ALDS? With three pitchers, Kluber would be going just one game ahead of his normal schedule in a potential game 4 and Carrasco would be on regular rest for a potential game five. If the series did stretch to four, however, it would keep Kluber out until game two of a potential ALCS and Carrasco out until game three if both pitched on regular rest.

Given that the goal isn’t just to win the ALDS and ALCS, but the World Series, it makes sense that the Indians would want to save as much of Kluber as possible for the final stage. With multiple other quality starting options, the four man rotation makes at least just as much sense as a three man.

As things sit, there is an argument that the third starter should be Mike Clevinger and there is an equal argument that it should be Trevor Bauer. For the season, Clevinger has at least slightly better numbers, but there is little question that the Indians as an organization favor experience and Bauer’s numbers are effected greatly by his early season struggles. After four rough starts in five from June through July, Bauer has allowed one or fewer runs in four of ten starts, striking out 72 in 65 innings with a 2.63 ERA. He has had a couple poor outings during that stretch, including two lesser games against Boston, but has pitched into the sixth in each of those ten starts and has really seems to have reinvented himself over the last few months.

Clevinger has had a similar, although slightly smaller, streak. He’s pitched at least 5.2 innings in his last five appearances, although he hasn’t made it past six in any start. During this run, he’s allowed just two earned runs, striking out 34 in 29.2 innings. While he has the ability to pitch a no hitter any time out, his tendency to long at bats and walks lead to high pitch counts and early exits. Bauer has had better control of late and has the ability to blow by the 100 pitch mark and still be effective. Because of all these factors, Bauer will likely be #3 throughout with Clevinger on the roster either in the bullpen (in a three man rotation) or the fourth starter.

The odd man out for both the rotation and the roster could very well be Josh Tomlin. It depends on how many outfielders and relievers the Indians want to carry, but there’s no question that he is the Indians worst regular starter and his skill set fits poorly in the bullpen. He is the worst of the Indians six most used pitchers in ERA, FIP, xFIP, K/9 and HR/9. Like everyone else in the rotation, Tomlin is on an impressive run with a 2.74 ERA over his last eight starts. This is made even more impressive as he had an extended trip to the DL in the middle of that span that cost him all of August. Of course, it may have been this time off that has helped him stay effective late in the year.

Tomlin starting a play-off game wouldn’t be the worst possible outcome and he should be the first man in should an injury occur to one of the top four pitchers. Despite this, it’s easy to look at the results from this season and his many years of home run happy seasons and say that he’s not in the Indians top four starters and shouldn’t be on the post-season roster as things now stand.