A Pair of QBs have Royster Brothers Believing in Week 3 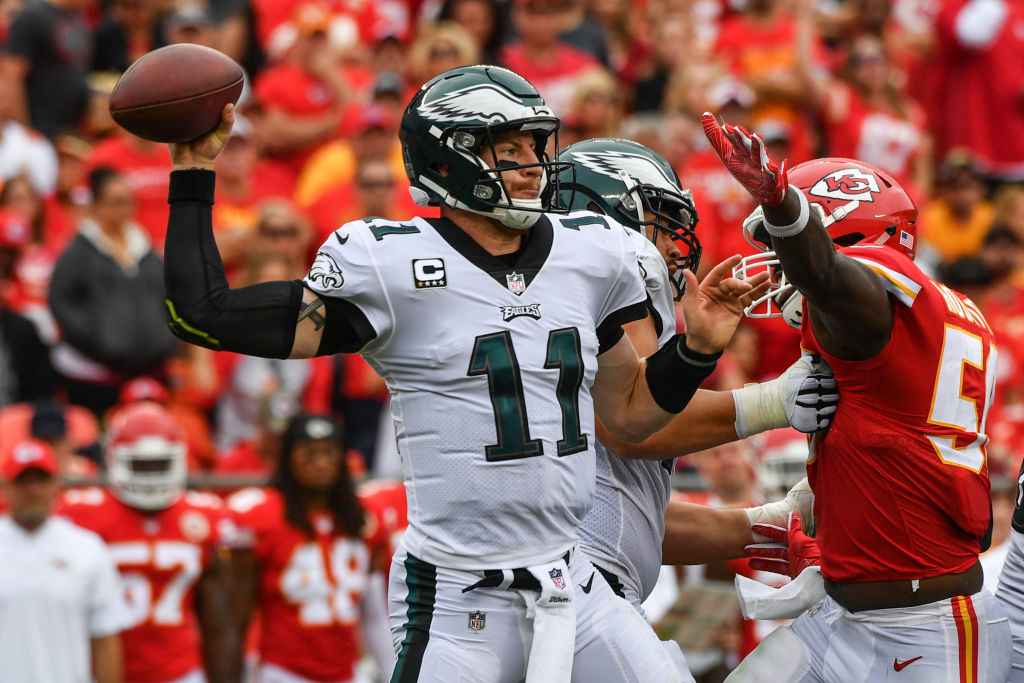 A Pair of QBs have Royster Brothers Believing in Week 3

This past February, Imagine Dragons — a Las Vegas-based rock group — released a song called “Believer”. Now, you can say what you want about that group. Many people have. In fact, there are some that ask all the time if I think I’m a little old or not enough hipster to listen. I like what sounds good to me. What can I say? (Although, don’t judge the group until you see them live — which I have.)

The point is this. By week three, there should be a solid sense of what teams are believable and what teams can be written off, entirely. This goes for players, too. I’d like to point out one specific case — Philadelphia Eagles quarterback Carson Wentz.

When the Eagles took Wentz over Los Angeles Rams quarterback Jared Goff, my brother was the first to ask “Who the hell is this kid?” After much explanation by me, he still had no idea. Fast forward to the first two games of the season where Wentz has done this:

Sure, that play was an incomplete pass, but Kansas City Chiefs linebacker Daniel Sorensen leaped over the would be pass blocker to get to Wentz who shrugged him off like annoying fly and still had strength enough to get rid of the ball.

Attiba is now a believer in Carson Wentz.

Let’s start with Attiba’s pick this week, by the way.

Attiba’s Pick (1-1 in 2017)
Philadelphia Eagles -6 vs. New York Giants
After three weeks, I’m 12-18-1 against the spread, and 1-1 with my pick of the week. Things are getting kind of tense around the house. My fiancée is looking at me with that “Maybe I would be better off with a guy who didn’t blow the mortgage payment and force me to borrow money from my mom” look in her eye.

So, this week I’m going for the easy money. Putting a shaky looking Eli Manning against that Eagles front with nothing but the chance of Odell Beckham, Jr. at 75% as your only weapon seems like the bill coming due on the soul deal Eli signed with the devil for those two Super Bowl rings.

Adio’s Pick (1-1 in 2017)
Detroit Lions +3 vs. Atlanta Falcons
Let’s go back to that thing I referred to about belief. Now, there’s still some flow to be made out with regards to the 2017-2018 season, but some of the lines this week prompted me to give the classic Captain Jean-Luc Picard meme. Too many games had me pondering what the hell Vegas was doing.

No disrespect, Cleveland Browns fans, but you’re not ready to be road favorites, yet. (The Browns are a 1 ½ point favorite at Indianapolis.) I know. I know. The Browns haven’t looked as abysmal as they have in recent years. There’s still hope that you’ll get over the over/under, but you lost by 14 at Baltimore a week after ALMOST beating Pittsburgh. I don’t know what to make of you guys, yet.

Similarly, I recognize that Tennessee can be really good this year, but they lost to Oakland at home by ten in week 1. You want me to lay money on you guys at home against Seattle? You guys realize that as good as Oakland’s defense is, Seattle’s is better? That line should be even or Seahawks -1.

Here’s something I do know. The Detroit Lions are getting NO respect at all this season. Before week one, I would’ve said that’s completely justified, but they were a two point home underdog against Arizona (won 35-23) and were a three point underdog at the Meadowlands against the Giants (won 24-10). This weekend, the Lions are a three point home underdog against Atlanta. Matt Stafford has actually looked pretty good in two games (114.6 passer rating, 71% completion percentage, six TDs, one interception).

Atlanta is a team that SHOULD HAVE lost to Chicago if the Bears receiver held on and caught one of two touchdown passes thrown to him. You’re telling me that Atlanta team (without their best pass rusher Vic Beasley, by the way) is essentially six points better than a Detroit team that’s looked pretty dang good in two weeks.