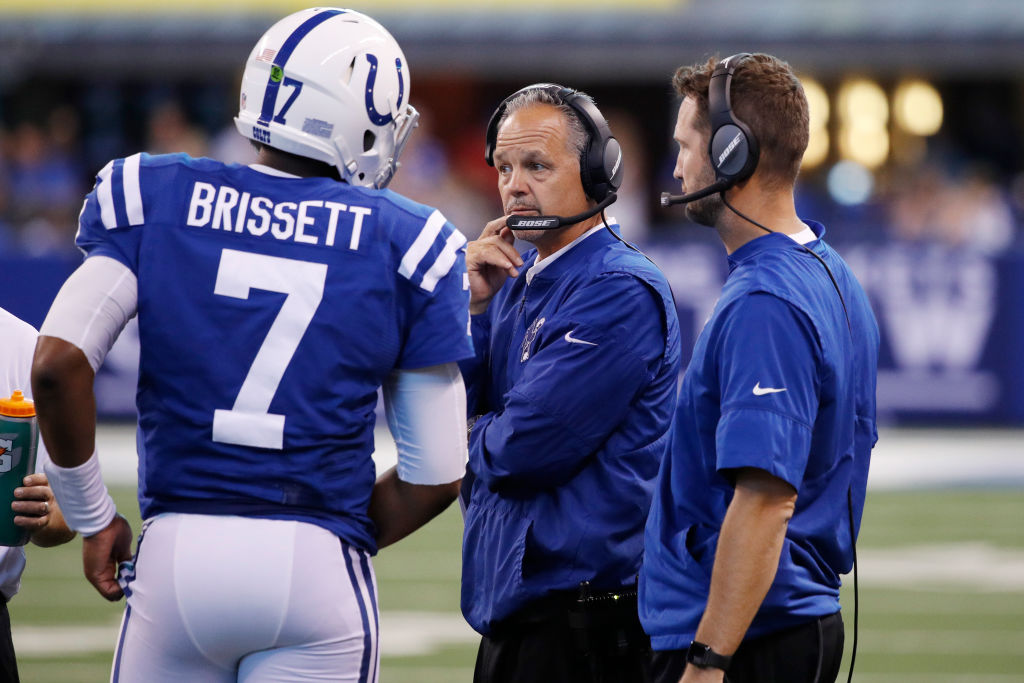 What is the brightest spot so far in this otherwise hideous season?  Please feel free to answer in character as Chuck Pagano.

Nate Dunlevy: (as Chuck Pagano) Look, you guys know what I know. We listen very carefully and try to follow what they tell us, and that’s nothing. So if you guys don’t know anyone who has been a bright spot, why would you ask me? I’m only the head coach. I can’t be expected to know things, have opinions or inform the public of anything. I swear, I quite literally know nothing.

Jeff Gerbig: The defense is much improved. The run defense has been stellar, and last week we actually saw an edge rusher win the fight and force a sack, plus a CB blitz work. When’s the last time that happened? There was another bright spot from Sunday but I’m saving that for the mailbag

Josh McMillan: Without a shadow of a doubt, the most impressive part of the Colts this year is the way that they have been able to stop the run through two games. Believe it or not, the Colts are ranked 2nd in total run defense, allowing an impressive 2.5 yards per carry average. For those of us who remember the Jonas Gray game, the 2014 AFC Championship, and even the entire 2006 season, this defensive front is a far cry from the days of old.

Jerald Pierce: (as Chuck Pagano) Bright spots? Well: Kamar Aiken has a hip, Darius Butler has a hamstring, Vontae Davis has a groin, Ryan Kelly has a foot, Andrew Luck has a right shoulder, Marlon Mack has another shoulder, Chris Milton has a hamstring (stay with me here, Gregg), Antonio Morrison has an elbow, Brandon Williams has a Calf, Quincy Wilson has a knee, and Chester Rogers and Anthony Walker have a couple more hamstrings. A bright spot? Look at all these pieces. One day we’ll have collected enough parts to build one full healthy player to put out there. Now I call that progress.

Chuck Pagano answer: You should see the facility. It has the sharpest iron and the best chopped wood ever. I know we haven’t won any games, but man you should see how well we’ve chopped that wood and sharpened that iron. And we’re going to keep choppin’ and sharpenin’ and grindin’, because that’s what we do to get better every day.

Without Andrew Luck, do the Colts have anyone who gives opponents difficulties when game planning?  Is there anyone on this roster who at least has the potential to keep opposing coaches up at night saying “how do I beat this guy?”

Nate Dunlevy: Teams are going to scheme for Brisset. He’s a bit of an unknown, and has that unpredictable ability to scramble, so that will be the thing teams are keying on. Keeping him in the pocket and avoiding a freak broken play.

Ben Rathe: Simply put, no. We have good offensive skill players in Hilton and Doyle, and occasionally Moncrief, but without Luck their value is greatly decreased. To be fair, that’d be the same for a lot of teams without their star QB. How scared would you be of Antonio Brown if Landry Jones is under centre? The only teams that perform well when they have limited weapons are the ones who are tremendously well-coached, like the Patriots during Brady’s absence last year. The Colts are not tremendously well coached.

Josh McMillan: Although not entirely their faults, despite what Gregg Doyel of the Indianapolis Star may assert, the Colts still have talent at the receiver position. Cleveland, after sending Joe Haden packing, does not have a corner that can consistently cover either Hilton or Moncrief. If Jacoby Brissett is able to grow on his positive outing in Week 2, I would look for him to take more shots down the field against a perennially subpar Cleveland defense.

Nate Wilson: I really can’t think of one. All the playmakers we have, rely on the QB. One guy doesn’t stand out to me as someone who is going to carry the team in Luck’s absence. Maybe T.Y? He can usually be productive even without Luck.

Casey Burks: I think T.Y. is still that guy. I think it’s absurd for the media and fans to bash him after what he’s done his first five years in the league. He had a few opportunities last week and Brissett either missed him or went with the easier throw. Hopefully they can capitalize on some of those this weekend.

Jerald Pierce: Coaches sleep like babies game planning for the Colts. The hope is that coaches spend so much time salivating over all of the options for attacking the Colts that they mess themselves up.

How sad is it that the Browns are favored to win in Indianapolis?

Nate Dunlevy: How sad is it that the Browns are favored to win in Indianapolis?

How said is it? Given that the Browns play in a factory of sadness, any thought of losing to them at home would have been unthinkable a few years ago. It’s certainly a commentary on the state of the franchise.

Having said that, I’m not at all certain *why* the Colts are underdogs. Or more to the point, why anyone would bet on the Browns mystifies me.

I think Indy is the better team, and I expect them to win Sunday. If they lose, the equation of this season changes dramatically.

Nate Wilson: It’s the browns. It’s terribly sad. I agree with Nate D. it’s a mystery why anyone thinks the browns should be favored. But maybe a loss would mean the end of this coaching regime? That’s probably the only way I’m not more depressed about being looked upon as worse than the Browns.

Josh McMillan: I am not upset that a team is favored to beat the Colts (at this point I would expect nothing less), but I am upset by the fact that there is no certainty that Deshone Kizer or Corey Coleman (two significant cogs in the Cleveland offense) are even playing Sunday. That’s right, Kevin Hogan is projected to get a road win. Please. I am not sad, but thoroughly disappointed that this is the perspective of the national media.

Jerald Pierce: It’s kind of…funny? It’s the third straight week where we’ll be contemplating if we’re watching the two worst teams in football. After week 2, Football Outsiders has the Colts 32nd in DVOA and Cleveland is 31st. Last week, the Cardinals were 28th before getting the Indy Bump up to 21st. (How effective is the Indy Bump? The Rams were 1st in DVOA after playing the Colts.) The Colts, right now, are the worst team in football. Without Luck, it’s probably going to stay that way. So, pick any team in the league, any venue. The Colts will and should be underdogs until Luck is back on the field. So…Luck for MVP, right?

Casey Burks: I would say it’s as low as you can get as a franchise in the NFL. I still think the Colts pull this one out though.

Jeff Gerbig: This is one of the lowest moments in recent Colts history, and by recent I mean going back more than 20 years. I do feel, however, that with another full week of Brisket learning the playbook, the Colts will win Sunday. Assuming they can suit up a full team of course.

Ryan Kennedy: A Browns fan messaged me talking trash about Sunday’s game. A Browns fan!! Now I know what an existential crisis feels like.

On the one hand, losing to a rebuilding team with a backup quarterback is the most Browns thing I can think of.

On the other, losing to the Cleveland Browns at home is the most Chuck Pagano thing I can think of.

This is our reality now and I hate it.