Knicks expect Carmelo Anthony to be part of team: will he reciprocate their embrace? 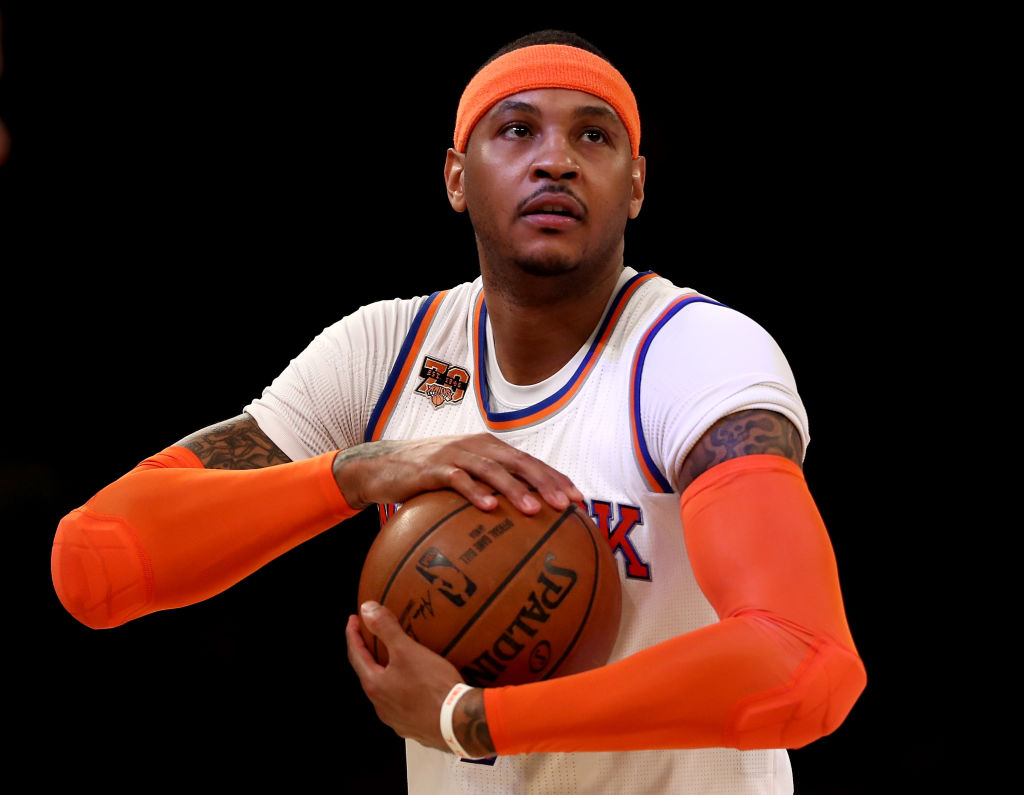 Knicks expect Carmelo Anthony to be part of team: will he reciprocate their embrace?

At his introductory press conference as Knicks President, Steve Mills was very clear about the Carmelo Anthony situation. Though New York wasn’t going to make a deal simply for the sake of pulling the trigger, it was a priority to seek out a mutually beneficial situation where Anthony could move on and the Knicks could start fresh after getting something of value back in return. The front office wasn’t keen on rushing things, but finding such a solution looked like it was a primary goal for the offseason.

That was mid-July. Over two months later, and nothing has changed. At first, it was easy to praise Mills and Co. for being patient. Unfortunately, with a new season right around the corner, the hope to move Anthony elsewhere has evolved into the most blatant elephant in the room. His remaining presence on this team will surely become an instant distraction and topic of conversation. It will be difficult for New York to start fresh, regardless of how hard they try. Anthony doesn’t fit the mold of what they’d like to do and who they prefer to build around. He’s still a very talented player, someone the team can’t afford to waste or ignore. He needs to be acknowledged on the court, but first, the Knicks have to provide answers off of it.

On Friday, Mills, General Manager Scott Perry, and head coach Jeff Hornacek did an about-face when discussing Anthony’s status with the media. Instead of alluding to any failed attempts to trade him this summer (perhaps because such efforts are still ongoing), the trio conveyed that the ten-time NBA all-star will indeed be part of the team if still on the payroll. Despite the drama and subsequent speculation, they aren’t simply going to tell Anthony to go away or push him to the side.

Mills and Perry said they expect Anthony to be a member of the Knicks come Monday (media day) and Tuesday (the start of training camp) and that he will report for duty on both days. As far as his role moving forward, Coach Hornacek simply said, “If you think I’m not gonna start him, you’re crazy,’ (hat tips to Ian Begley and Mike Vorkunov).

All Quiet on the Western Front. That’s the way it should be, business as usual as the two sides hope to find an appropriate solution. They key here will be for Anthony to follow the front office’s example and remain professional about the situation when he speaks on Monday. The fact of the matter is, Anthony is a Knick until further notice. It’s in New York’s best interests to make the best of the situation. If they can embrace him, then there’s no reason Anthony can’t wear his heart on his sleeve when he takes the court and continue to be a supportive teammate. In 2012, Anthony was more accustomed to deferring to his well traveled veterans. Five years later, and the Knicks could really use someone like him to be the guiding light for others as the organization embraces their youth and moves forward.

Phil Jackson is no longer around to air out this team’s dirty laundry in the media. At least in that regard, the new regime appears to have a fresh outlook on respect and regard for their players. It would go a long way toward crediting Anthony’s maturation for another team’s consideration (or simply, his legacy as a Knick, regardless of how much longer he remains) if he can keep his head up and be positive in the face of recent adversity.