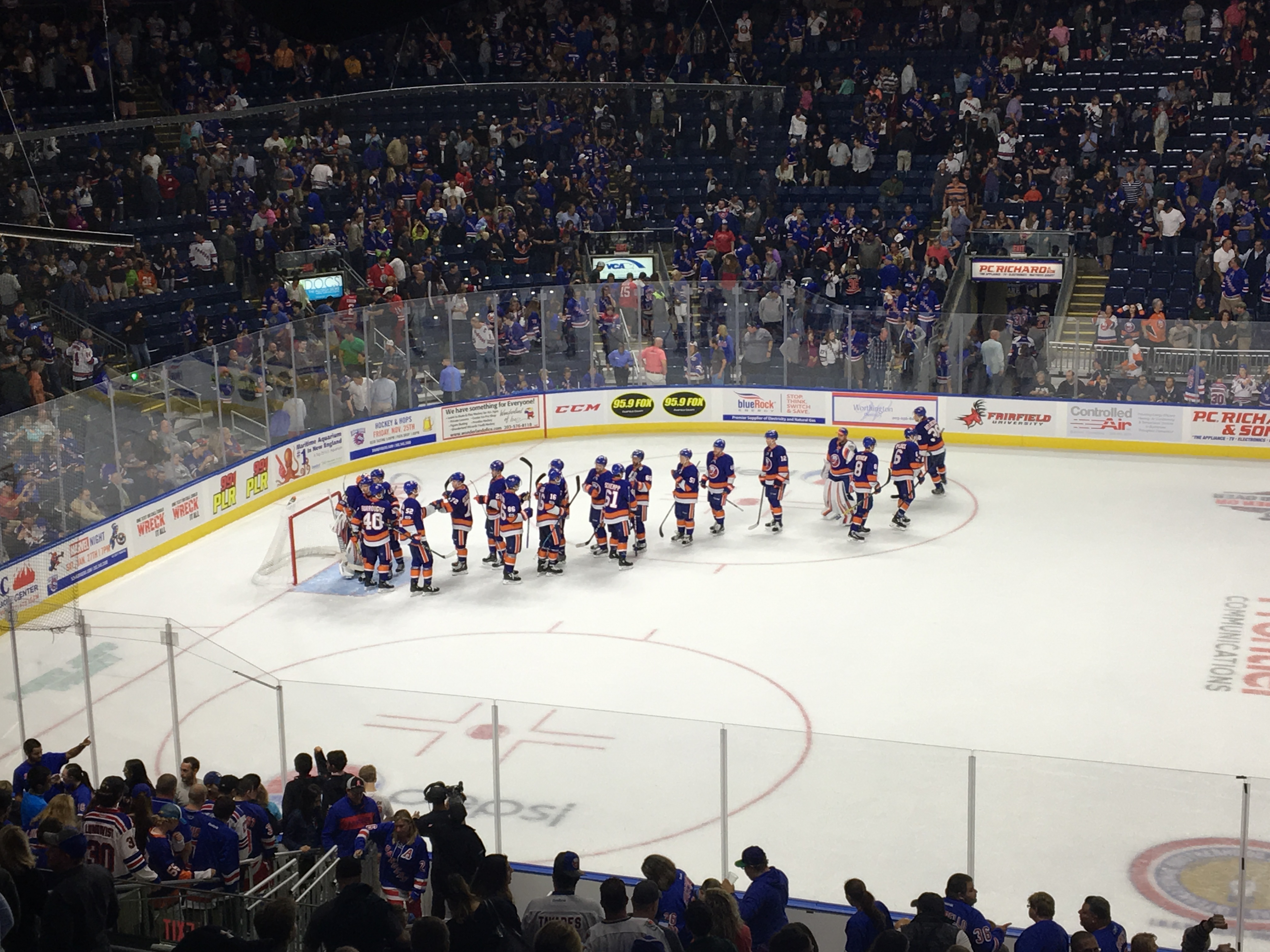 BRIDGEPORT, CT — The Islanders held off a flurry of chances from the New York Rangers late in Friday night’s game to hold on for a 2-1 win. It was a spirited affair in front of a rather large pro Ranger crowd at Webster Bank Arena.

Casey Bailey scored the Islanders first goal of the night, giving them a 1-0 lead early in the second period. He cleaned up a loose puck in front of the net. The Rangers tied the game later in the period when Vinni Letteri finished a one-timer during 5-on-3 advantage for the Rangers.

Anthony Beauvillier broke the tie with 8:57 left in the second period. He tapped in a nice feed from Nikolay Kulemin. The Islanders are 3-0-2 in the preseason.

1. Jaroslav Halak went a full 60-minutes on Friday, which was a first this preseason for the Islanders netminder. He finished the game with 34 saves and didn’t miss a beat once all night. The Islanders goaltending has been strong through their first five exhibition games, but Halak certainly made the case for why he should be in net on opening night.

Islanders head coach Doug Weight liked what he saw from Halak.”He carried it on from MSG. Jaro was great,” Weight said. “He made the big saves… Just his body language, energetic, athletic, aggressive. He was good.”

2. Halak was back in Bridgeport for the first time since he was banished to the AHL last season.The Islanders goaltender was happy to be back in the Connecticut city and see so many people in the stands for a preseason game. “It was good to be back and see so a lot of fans in the stands,” Halak said. “It was kind of cool. It would have been better if we had more fans tonight than the Rangers, but at the same time it’s always nice to see a sold out building in the preseason.”

3.  The 32-year-old goaltender didn’t change up his offseason training regiment, but he was able to prepare a bit harder compared to last season. Halak underwent surgery last offseason and wasn’t able to push himself as much as he got ready for the season. This time around Halak said he had the full three months to prepare at home.

The Islanders new goaltending coach, Fred Brathwaite, also hasn’t tried to change much of what Halak has been doing. “I think he’s trying to lay back for now,” Halak said.

4. Casey Bailey had a big night, scoring his first goal with the Islanders organization and making his overall presence felt during the course of the night. Friday was Bailey’s best game so far in the preseason and he sounded confident after the game. “I just want to come in here and earn a spot,” Bailey said. I think I belong in this league, not an American League up and down guy. I want to solidify myself in the NHL.”

Doug Weight echoed similar sentiments he had said earlier in the week about what attracted the team to Bailey. Weight called him a smart hockey player and a good release.

5. Weight after the game talked about the play of Ryan Pulock, who is expected to make the Islanders roster. The Islanders head coach said he wants Pulock to be assertive  and physical, but doesn’t want him to be a stay at home defenseman.

“I also want to a little more of moving the puck and running down the middle,” Weight said. “And getting the puck offensively and being a little deceptive offensively, not just waiting for shot… I want to see that assertiveness in the offensive zone.”

To be clear, Weight wasn’t saying that as a knock on Pulock, just something he wants to see more of.

6. Josh Ho-Sang continues to a fun player to watch on the ice. He was at it again last night, dangling the puck, creating offensive opportunities as well as excitement. There are still a few things that Ho-Sang can improve on, but he continues to show why he will make the opening night lineup.

7. Ho-Sang, Brock Nelson and Pulock saw power play time against the Rangers. Weight had said after Wednesday’s game in Brooklyn that he was already starting to think ahead to his special teams pairings for Friday’s game And on Friday Weight said that you can expect to see those guys get some more power play time during the preseason.

Josh Bailey and Anders Lee were also out on the power play. “Definitely I want to try to get those units together and we’ll see where it leads,” Weight. Mathew Barzal, John Tavares and Jordan Eberle also worked on power play stuff earlier on Friday at the Islanders practice facility.

8. This was a nice little play by Nikolay Kulemin to set up the Anthony Beauvillier goal in the second period to break the 1-1 tie.

9.  I was informed by the great Michael Fornabaio that Friday was the first time the Islanders have played the Rangers at Webster Bank Arena.

10. Halak joked about the crowd having a lot of Ranger fans in, but it was a mostly pro Ranger crowd for the preseason tilt. It was a crowd of  8,612 that packed the home of the Islanders AHL affiliate. That was in spite of all the traffic that no one could seem to avoid, not even the Islanders themselves.