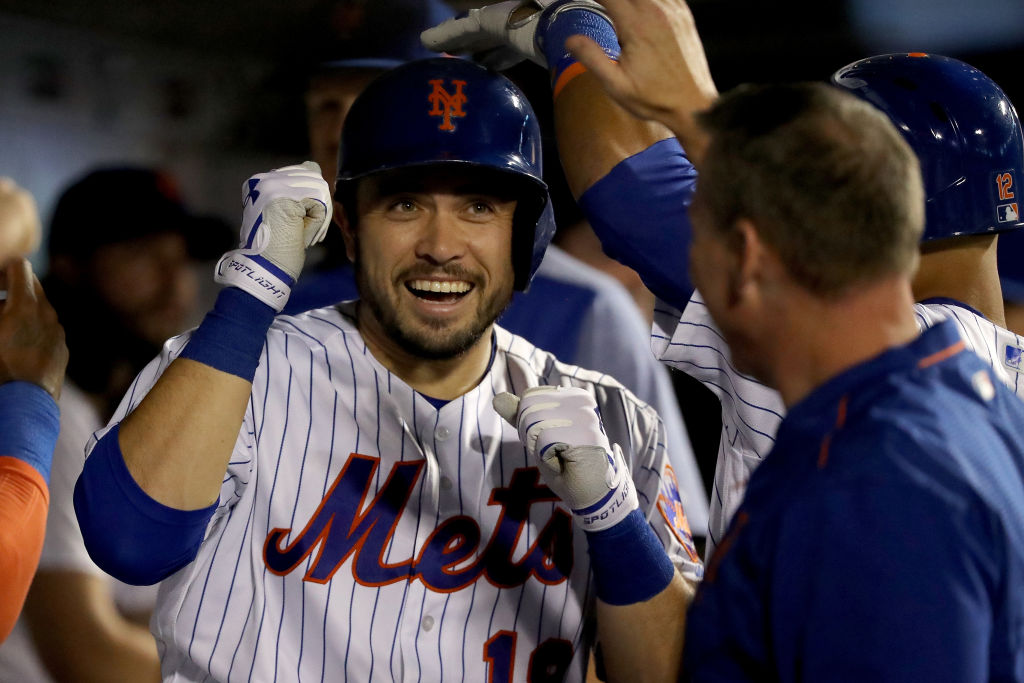 It has been no doubt a disappointing season for the New York Mets, and one of the easiest scapegoats has been catcher Travis d’Arnaud. d’Arnaud came to the Mets in the R.A. Dickey trade in 2013 with a ton of hype as their next great catcher, and while he has shown flashes of brilliance, he hasn’t lived up to those sky high expectations. Prior to this season, d’Arnaud had hit above .247 only once and has had a ton of issues throwing out base runners. Health has also been a major problem for d’Arnaud, who has played more than 75 games only twice in his career. Despite all the complaints, d’Arnaud has been productive enough for the Mets to justify another chance in 2018.

NEW YORK, NY – SEPTEMBER 22: Travis d’Arnaud #18 of the New York Mets celebrates after hitting a solo home run against the Washington Nationals in the second inning on September 22, 2017 at Citi Field in the Flushing neighborhood of the Queens borough of New York City. (Photo by Abbie Parr/Getty Images)

d’Arnaud had a big game for the Mets last night, launching a pair of homers and driving in four runs to help them sneak by the Washington Nationals’ backups 7-6. In 105 games this season, which is only three off of his career high in games played, d’Arnaud has set personal bests in home runs (15) and RBI’s (52) while batting a respectable .245. Those numbers have allowed d’Arnaud to post a 1.0 WAR figure, which is fine if he can platoon with Kevin Plawecki in 2018. The Mets actually haven’t fared terribly at the catcher position, having their backstops bat .248 with 27 doubles, 25 homers, and 80 RBI’s. Those figures do account for Rene Rivera’s stats with the Mets (he has since moved on to the Cubs), but that is pretty solid production from the catcher position.

The free agent market also doesn’t offer a ton of potential upgrades, with the underachieving Jonathan Lucroy (.258/5/38, WAR -0.1) and 30 year old Alex Avila (.266/14/49, WAR 2.6) as the top options. Both would command a sizable commitment in free agency, which doesn’t make a ton of sense for the Mets when they can similar combined production from d’Arnaud and Plawecki (.250/2/9, WAR 0.4). The tandem of d’Arnaud and Plawecki will also make significantly less salary, earning roughly 3.5 million combined factoring in d’Arnaud’s salary arbitration. The economics alone make sense for the Mets to give d’Arnaud another go, and if he can build on his 2017 numbers next season the Mets will get strong production from their catchers.