Colts barely hold on for first win: 31-28 over Browns 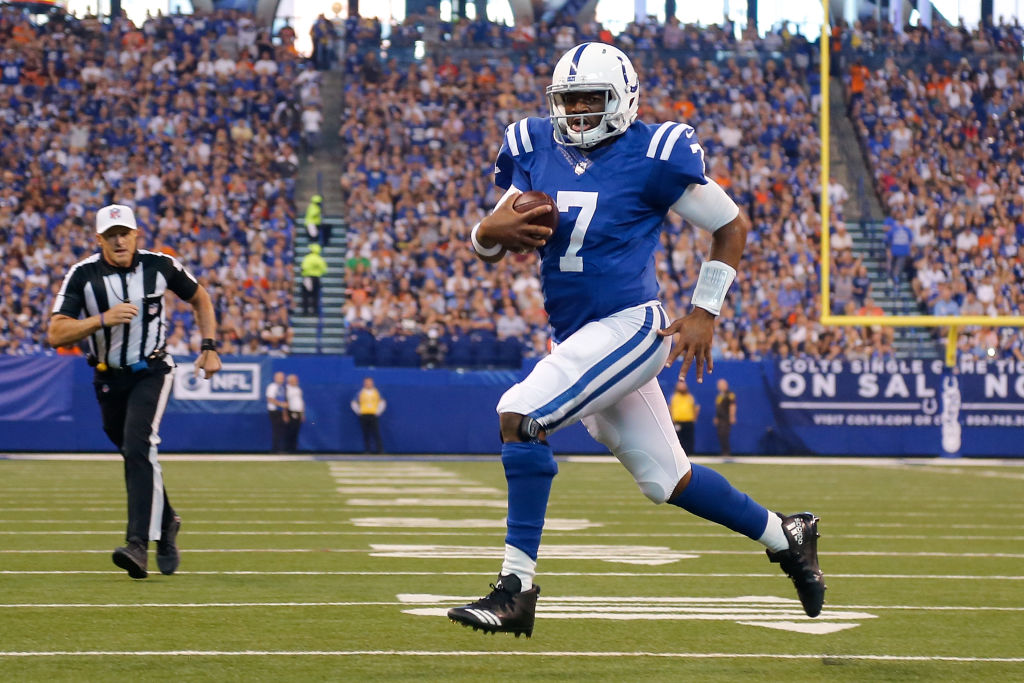 Colts barely hold on for first win: 31-28 over Browns

The Indianapolis Colts secured their first win of the season by beating the woeful Cleveland Browns. In this matchup of perhaps the two worst teams in the NFL, the Colts still tried to give the game away in the end, proving once again that they have no finishing instinct under Chuck Pagano’s direction. But, on a day when there’s finally news that Andrew Luck may start practicing soon, the Colts actually looked a bit like the Colts against the Browns—which is both a good and a very, very bad thing.

What started as a puntfest (five straight drives ending in punts) ended in the makings of a blowout—or at least a high scoring affair.

Throughout the first half, the Colts sent pressure against the rookie QB DeShone Kizer. While it occasionally got to him and at least made him scramble, most of the time Kizer had plenty of time to throw. A lot of the pressure wound up coming because of how long Kizer was holding the ball which was partially thanks to the Colts secondary having a decent half, but mostly because of Kizer being a rookie. John Simon was the only Colts player to get a sack on Kizer.

The first three possessions for the Browns ended in punts as Kizer looked uncomfortable. It didn’t help that Browns receivers had clearly left their hands at home. Between the drops and the missed throws, it’s easy to imagine even a slightly better team/QB having more success against the Colts defense.

The Colts offense early in the game wasn’t much more productive. The Colts were intent on running the ball early to limited success. It was a tough outing for the offensive line as Jeremy Vujnovich, playing left guard, had a false start and a couple occasions of stepping on Jacoby Brissett’s foot when trying to pull in run blocking. Between mental mistakes and penalties on the o-line and a game plan that insisted on running the ball into walls, the first quarter looked like an exercise in futility.

This resulted in TY Hilton (who was averaging 59.6 yards in his 12 games without Luck) getting the vast majority of his 153 yards and his only TD in the second quarter and the Colts offense putting up three total TDs in that quarter. The anomaly during the Colts’ four straight scoring drives was the ineffectiveness of Jack Doyle. It was a very uncharacteristic day for Doyle as he only caught 2 of 5 passes for 16 yards.

While the offensive line didn’t afford Brissett much time, he bought more with some very Luckian moves both in and out of the pocket. The first two TDs of the day were thanks to Brissett’s legs. His second included a nifty (yes, nifty) spin move to leave a defender in the dirt. The second quarter was the closest to the real Colts offense this unit can get without Luck—big plays, Hilton spending away from people, scoring almost at will.

The Browns joined in the scoring by putting up two TDs of their own in the second quarter. Their first was a result of Pierre Desir, who started at right cornerback with Vontae Davis and Quincy Wilson out with injuries, getting beaten on the sideline by Kenny Britt for a big game. Desir was then left watching as Duke Johnson leapt over him into the end zone to end an 18-yard TD run. To be fair to Desir, he was being blocked and about half of his teammates were on the ground after whiffing badly trying to tackle Johnson.

Their second TD came after the drive was extended as Darius Butler, finally back in action, bailed out the Browns with a pass interference penalty on 3rd and long. Jordan Leslie then made an incredible one-handed catch over Rashaan Melvin for 26 yards. A one yard TD pass for Kizer pulled the Browns within two touchdowns.

The Colts went into the half up two touchdowns, feeling good, and presumably in position (getting the ball to start the second) to put the finishing touches on a Browns team that was somehow worse than they were. Right?

The Colts spent the second half trying to give the game away. It’s not even worth breaking down drives because they all were essentially the same. The Colts offense abandoned everything that had worked for them in the first half (like passing the ball deep and to Hilton) and decided to run Gore into the middle of a waiting defensive line possession after possession.

The Colts offense is the most situationally predictable unit in the NFL. If they’re up, they get very conservative and they try to hand the ball off over and over while simultaneously handing the game to their opponent. A better team beats the Colts. Or a better QB or WRs who are capable of consistently catching the ball.

The second half proved that this game was a perfect storm of bad on the Browns sideline for the Colts to scrap together a win.

Note: It’s nice to be able to make actual scheme complaints like this like we could about last year’s team rather than just having to shrug and say “wow, they’re bad.”

Note’s note: We shouldn’t have the same complaints that we did about last year’s team. The coaches should learn from how poorly they coached and coach better. It’s asking too much, I know.

Melvin had two interceptions in the second half that he’ll get more credit for than he probably deserves. Kizer spent the entire game missing passes, so credit to Melvin for, when the ball came to him, doing what Kizer’s receivers couldn’t: catch the ball. Melvin also had a few fantastic pass breakups and a couple eye-roll worthy penalties. No one’s name was called more in this game than his. It will be interesting to see how he fits into the secondary when Wilson and Davis are both back and healthy.

The second half saw the Browns score two TDs and the Colts put one FG on the board. That FG wound up being the difference in a game that had no business being that close. While the Jaguars beat up on the Ravens across the ocean, it’s hard to figure out when they developed better winning instincts than the Colts.

COLTS win, though. So…no 0-3 for the Colts who are one step closer to a Luck return.

TJ Green? Anyone? With Butler back, Farley playing well, and Malik Hooker being the future (and getting his second INT, even if it was a gimme on a final Hail Mary play), where does TJ Green fit in? He probably doesn’t. Corners have at least 4 guys who deserve playing time above him when completely healthy and the safeties have 3.

How much of Colt’s caution about Luck has to do with how awful this o-line looks? Brissett’s mobility saved him a few times, but he still took his share of hits.

TY Hilton with 31 career TD catches. 7 have been for 61 yds or longer.
Nice percentage.

On that touchdown reception, @TYHilton13 has passed Lenny Moore (6,039) for the fourth most receiving yards in franchise history.

And because you’re probably wondering if you missed this game/pregame: