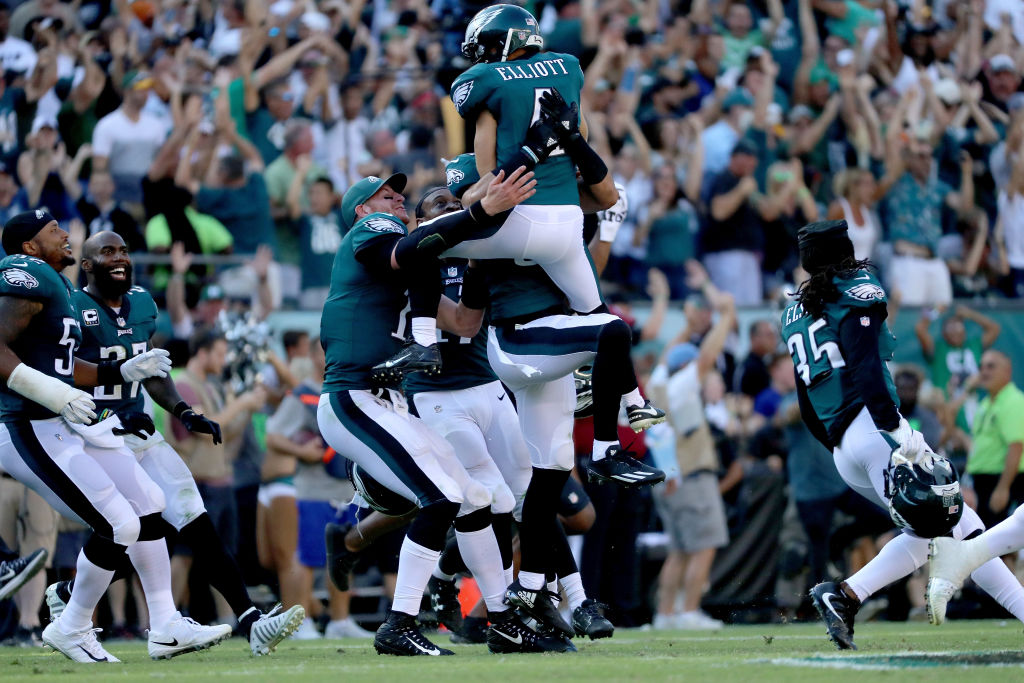 It was an absolute fourth-quarter thriller in their first home game of the season, and the Eagles ran off with a 27-24 victory over the New York Giants.

The early minutes of the game saw struggles coming from the Eagles offense as they were held to two straight 3-and-outs.

The Eagles defense, however, opened up strong against Eli Manning and the Giants offense, including  a huge 3rd-and-inches stop by safety Malcolm Jenkins, forcing them to consecutive punts.

After shaking out the jitters, the offense put together an impressive 18-play drive which heavily featured the running game, including an 11-yard run by Carson Wentz and a 17-yard run by running back LeGarrette Blount. The drive was capped off by a one-yard touchdown run by Blount.

The defense would continue to swing as cornerback Rasul Douglas went up against receiver Brandon Marshall and came down with an interception. The offensive possession that would follow ended in a head-scratcher as the Eagles attempted a 4th-and-8 conversion, giving the Giants the ball near mid-field as Wentz would go down on the conversion attempt.

With the gifted field possession, the Giants were able to bring the ball all the way down to the half-inch yard-line. However the Eagles defense put together yet another impressive stop, keeping the Giants off the board through the first half.

Despite the loss of tackle Fletcher Cox (calf) and linebacker Jordan Hicks (ankle), the Eagles defense continued to shine going into the second half. On the Giants first possession of the half, linebacker Mychal Kendricks tipped an Manning pass, which sailed into the hands of cornerback Patrick Robinson.

The following offensive possession would feature a 41-yard gift by Giants cornerback Eli Apple by way of a pass interference call, giving the Eagles the ball at the three yard-line. The Eagles capitalized with a three-yard touchdown pass from Wentz to tight end Zach Ertz.

It would not be until the fourth quarter when the Giants would get their first points of the game with a 10-yard touchdown pass from Manning to receiver Odell Beckham Jr.

Following the touchdown, the Eagles committed their first turnover of the game when Ertz was stripped by Landon Collins. The turnover would result in a four-yard touchdown pass from Manning to Beckham.

The Giants would then take the lead with a huge 77-yard catch and run by receiver Sterling Shepherd.

It would not take long for the Eagles to get right back as another huge penalty on Apple would eventually lead to a 15-yard touchdown run by rookie running back Corey Clement.

After trading a pair of field goals, the game literally came down to the last second as rookie kicker Jake Elliot nailed a monstrous 61-yard field goal to seal the deal for the Eagles.

Next week, the Eagles will head to Carson, California to take on Phillip Rivers and the Los Angeles Chargers. Kickoff is set for 4:05 p.m.