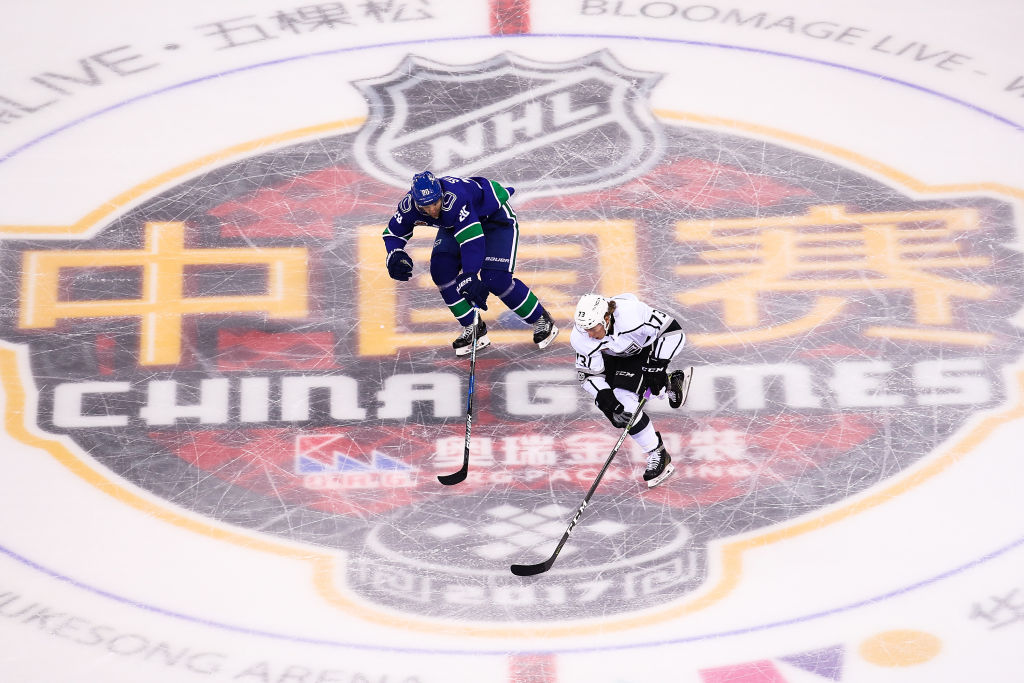 The Los Angeles Kings and Vancouver Canucks played the first ever two preseason games in China.

The Kings are undefeated in China, after beating the Canucks 5-2 before 10,088 at Mercedes-Benz Arena in Shanghai on Thursday and 4-3 in a shootout before 12,759 at Wukesong Arena on Saturday.

During their trip to China, the teams also held youth clinics in Shanghai, and the NHL held a Fan Fest in Beijing.

People got to see NHL game and Chinese kids already playing hockey got to meet players, get autographs from them and even skate with them.

BEIJING, CHINA – SEPTEMBER 23: Young kids play hockey at the NHL Fan Fest before the pre-season game between the Los Angeles Kings and the Vancouver Canucks at Wukesong Arena on September 23, 2017 in Beijing, China. (Photo by Lintao Zhang/Getty Images

The Kings and Canucks went sightseeing to places like the Bund in Shanghai and Great Wall in Beijing; experiences they will surely never forget.

But the real reason the Kings and Canucks made traveled so far to play was to reach new fans.

The Chinese government wants 300 million people to participate in winter sports as part of the the 2022 Beijing Olympics and asked the NHL for help in growing hockey. The League offered their expertise in building hockey infrastructure and a national team, and playing games in the country.

“It certainly is our hope and intention to continue to help grow the sport in China, both at the grassroots level but also bringing the best players and best teams in the world here hopefully on a regular basis going forward,” NHL Deputy Commissioner Bill Daly said to NHL.com.

“It is a fact that we understand that to grow the sport here in China, we do have to invest in the infrastructure, help build the infrastructure from children on up, to make hockey relevant in the Chinese marketplace, and I think we’re prepared to do that.”

The NHL does not have firm plans to return to China. It has to evaluate this experience and consult with the NHL Players’ Association first. But Daly said the League was encouraged by what happened here and hopes to return on a regular basis.

“Looking back on this, we’ll think it’s a good first step for greater influence in China,” Daly said.