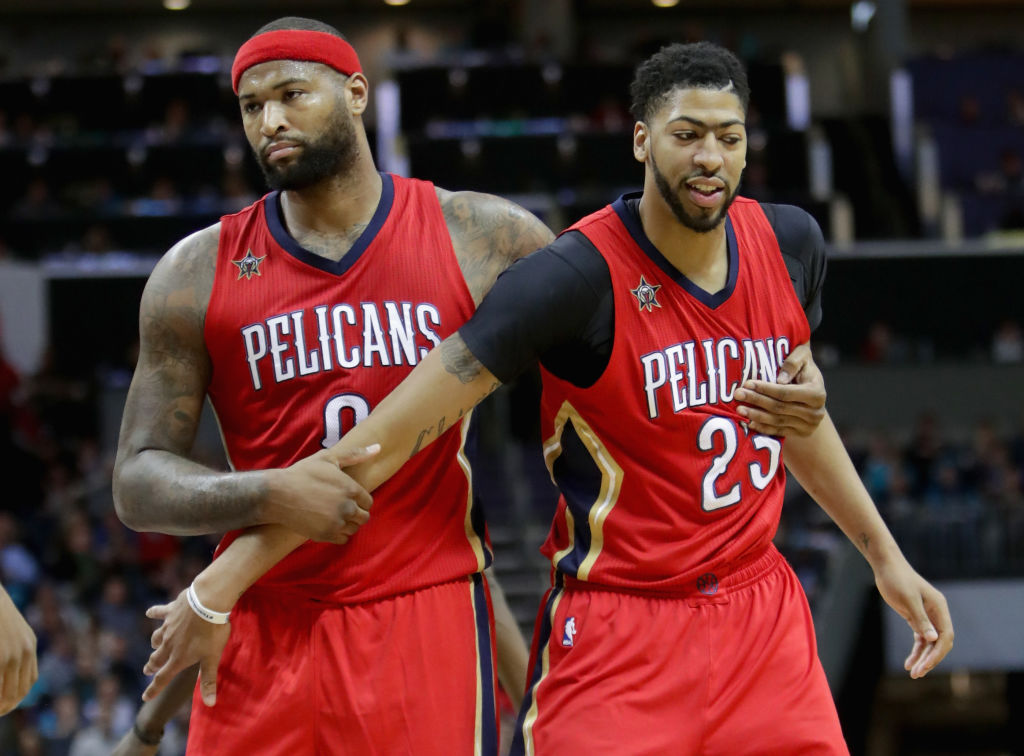 The New Orleans Pelicans have been very busy in the last few weeks before the actual preseason starts. The flurry of moves were and is attempts to add depth & a solid player or two to fill in for injured starting small forward Solomon Hill who was pretty much lost for the regular season. Here’s a breakdown of everything over the last 2 weeks to catch you up:

The Pells resigned defensive minded 3 point shooting forward Dante Cunningham to a 1 year deal. The familiarity with Cunningham made him an obvious choice to Pelicans that is, to fill the starting small forward role in the absence of Solomon Hill. Cunningham averaged 6.6 PPG & 4.3 REBS in 2016 for the Pells while shooting 39% from downtown.

NEW ORLEANS, LA – FEBRUARY 23: Eric Gordon #10 of the Houston Rockets drives against Dante Cunningham #33 of the New Orleans Pelicans during a game at the Smoothie King Center on February 23, 2017 in New Orleans, Louisiana. NOTE TO USER: User expressly acknowledges and agrees that, by downloading and or using this photograph, User is consenting to the terms and conditions of the Getty Images License Agreement. (Photo by Jonathan Bachman/Getty Images)

The Pells signed veteran small forward Martell Webster who hasn’t played in the NBA since the 2014-15 season. The 6-7 230 lbs Webster (30) is 10 year pro who was drafted 6th overall in the 2005 NBA Draft by the Portland Trailblazers. Webster didn’t live up to high draft status and has had stints with Minnesota (2010-12) & Washington (2012-15) after leaving Portland. Martell’s career averages are 8.7 PPG 3.1 REBS with 38% shooting from beyond the arc in 580 games. Webster is attempting to complete is his comeback to the league with The Pelicans.

CLEVELAND, OH – APRIL 15: Iman Shumpert #4 of the Cleveland Cavaliers tries to block Martell Webster #9 of the Washington Wizards during the first half at Quicken Loans Arena on April 15, 2014 in Cleveland, Ohio. NOTE TO USER: User expressly acknowledges and agrees that, by downloading and or using this photograph, User is consenting to the terms and conditions of the Getty Images License Agreement. (Photo by Jason Miller/Getty Images)

The Pells signed some competition for Chiek Diallo as the team inked former 1st rounder forward Perry Jones the 3rd to the team. Jones 6-11 240 lbs is a Louisiana native (Winnsboro) selected in the 1st round by OKC in 2012 after an excellent year with Baylor. The former Baylor Bear was used in scant minutes before being let go in 3 seasons with The Thunder. Perry Jones career numbers are 3.4 PPG 1.8 REBS & 11.7 Mins in 143 games.

NEW YORK, NY – NOVEMBER 03: Perry Jones #3 of the Oklahoma City Thunder in action during a game against the Brooklyn Nets at the Barclays Center on November 3, 2014 in the Brooklyn borough of New York City. NOTE TO USER: User expressly acknowledges and agrees that, by downloading and/or using this photograph, user is consenting to the terms and conditions of the Getty Images License Agreement. (Photo by Alex Goodlett/Getty Images)

The Pells signed according to Basketball Insiders forward Cliff Alexander to a deal. Alexander (21) who is 6-8 250 lbs last played for the Portland Trailblazers in the 2015-16 for just 8 games. He also signed short-term deals with Brooklyn, Orlando & a couple stops in the D-League with The Santa Cruz Warriors. The former Kansas Jayhawk is looking to stick and stay with New Orleans this season.

KANSAS CITY, MO – MARCH 13: Cliff Alexander #2 of the Kansas Jayhawks sits on the bench against the Baylor Bears during a semifinal game of the 2015 Big 12 Basketball Tournament at Sprint Center on March 13, 2015 in Kansas City, Missouri. (Photo by Ed Zurga/Getty Images)

New Orleans also had their media day as they introduced the 2017-18 version of The Pelicans to world.  The teams super-star forward Anthony Davis said:

“I think right now if you look at our roster, all of our guys could easily be in our rotation,” Davis said. “I think this is probably the most talented roster we’ve had. But that’s only on paper, we’ve got to go out and prove it.”

The Other All-Star Big DeMarcus Cousins answered a lot of questions about the team but the one that stood out was the comment on President Trump were DeMarcus said:

The least of Trump’s concerns, Cousins said, should be what’s happening in the NFL. Cousins said he finds it weird that the president spends more time on Twitter than “taking care of the problems of our nation.” “It’s getting to the point where it’s just silly.”

After ALL that The Pelicans even had time to release their alternate jerseys & sign a deal with Coke Cola to become the official soft drink of the team. That was a pretty busy couple of weeks for New Orleans as they gear up for the upcoming season, pretty exciting almost as busy as them Sports Coma Guys!