Three things Timberwolves fans should look forward to this season 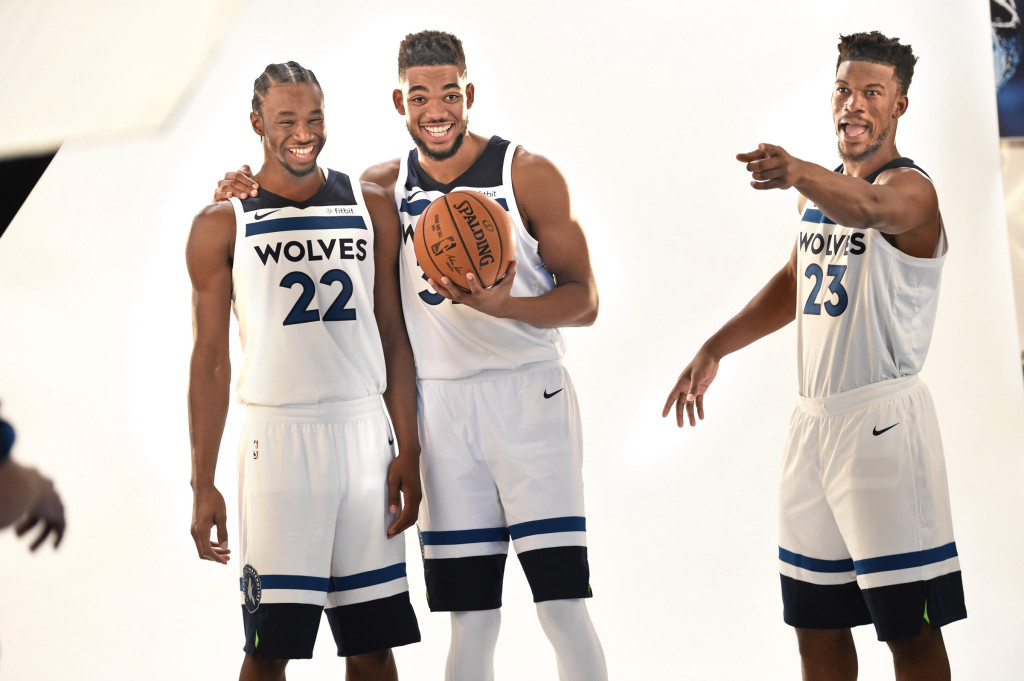 Three things Timberwolves fans should look forward to this season

With media day come and gone, this new look Timberwolves team already getting introduced or readjusted to the bellowing sounds and hard running of a Tom Thibodeau ran training camp.

With a shortened pre-season slowly creeping upon us, its time to look at three different storylines that will intrigue Timberwolves fans this season as they look forward to finally watching a winning team.

1. All-Star appearances for the stars.

Widely renowned as a snub last year, Karl-Anthony Towns, a man who averaged 25 and 12 on 54% shooting, will  finally make his first All-Star appearance in 2017-18. Throw in the fact that new Wolf Jimmy Butler has made the trip the last 3 seasons and there is a lot of individual success to prepare for this year.

A shortened rest might be a bit taxing on the players involved, but an All-Star nod in Los Angeles’ Staples Center will be a huge boost for the stars of this team, as well as a great spectacle for T-Wolves fans, who haven’t seen an All-Star since Kevin Love in 2014.

2. The competition for minutes.

While the stars and new faces will rightfully dominate the headlines early in the year, there is an underlying story that will be crucial come (please lord…) playoff time, the battle for minutes inside the rotation.

Plenty of questions can be asked, Gibson or Dieng?  Brooks or Jones? How many minutes for Bjelica?

All of these questions will be answered throughout the long, strenuous season, with Thibs leaving it up to their game, not name to decide a players minutes.

I asked Thibs if A. Brooks is his backup pg: "I want quality depth. I don't know how it's going to play out. They'll tell me" w/ their play

With Bjelica getting back from a foot injury that cut his 2017-18 season short, Thibs relayed the progress he has made, and seems like he is enjoying the big Serbian back.

These important decisions that need to be made throughout the course of the season will be pivotal when it comes to winning time for the Timberwolves.

3. Andrew Wiggins living up to his contract

We’ve mentioned the two already made superstars on this team in Karl-Anthony Towns and Jimmy Butler, but with a 148 million dollar max contract looming, Andrew Wiggins has the most to prove this year.

Andrew Wiggins has a 5yr, $148M contract offer on the table. Says he's taking his time reading it without an agent.#BALLGOD pic.twitter.com/wrNJ2hlIXk

A dynamic scorer, Wiggins has been widely criticized for his deficiencies in other areas on the court, defense being the main concern. (I wrote about that here) but Wiggins himself has been putting in work to become a stronger and more well rounded player going in to his fourth season.

Andrew Wiggins’ first comments today: “Me and Jimmy [Butler] are going to be a problem.” #Twolves

A big contract and a big amount of pressure and a big role change, Andrew Wiggins will need to go from budding young star, to seasoned team player in an instant.

The Wolves are going to be fun to watch this year, and these three storylines are just a small sample of the excitement around the Timberwolves. Lets just hope its these kind of issues we are discussing, and no longer how to fix a losing team.