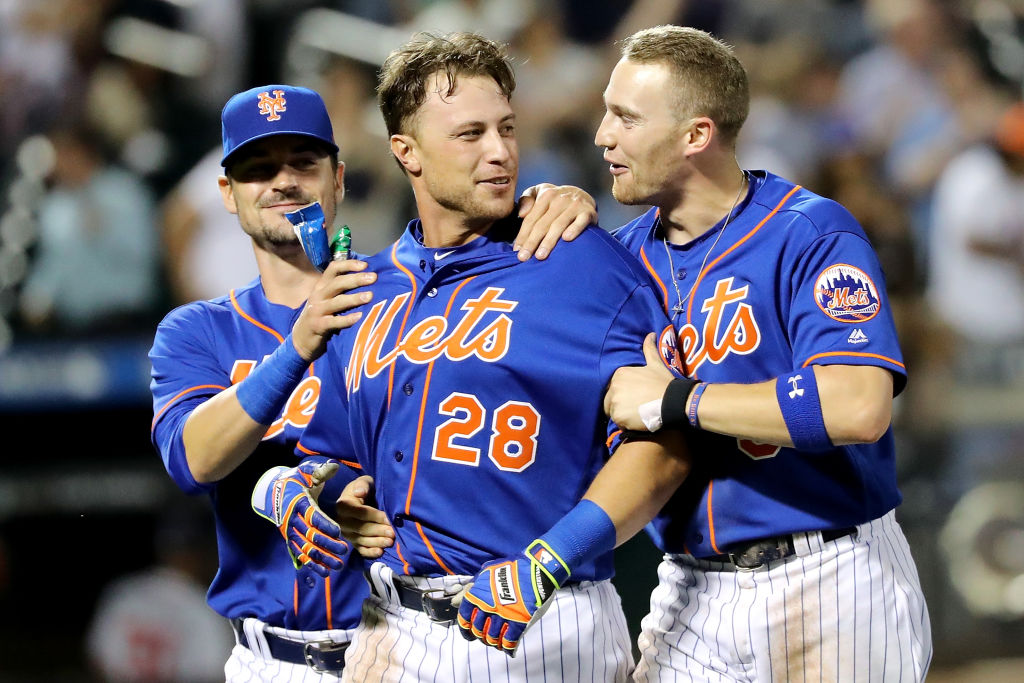 Who really understands the knuckleball? R.A. Dickey has thrown it for over ten years and he might tell you that he still doesn’t understand it. All he knows is that it works, and it’s made him a lot of money and given him a lifetime of great memories. Winning 20 games in 2012 is paramount among those memories for us as I’m sure it’ll be for him when it’s all said and done. When he walked off the Citi Field mound as an Atlanta Brave, it might have signaled the “said and done” part for Robert Allen. He has danced around the subject of retirement, perhaps ready to do the tango with AARP. (If you don’t think that a knuckleball can still strike out major league hitters when you’re fifty, then you don’t know AARP.) Mets fans didn’t forget the contributions that Dickey made to the Mets, whether they be in arrival or departure. They let him know it with an ovation after he gave up two runs in six and 2/3’s against the Mets.

“It’s great coming back here,” [Dickey] said. “I have a lot of history here. This is a place where I really resurrected my career, so there’s some poetry to throwing well here, especially in one of the last outings of the year. It was nice to get to tip my hat to a bunch of fans who really supported me while I was here and beyond.”

NEW YORK, NY – SEPTEMBER 26: R.A. Dickey #19 of the Atlanta Braves throws out Norichika Aoki #11 of the New York Mets in the sixth inning on September 26, 2017 at Citi Field in Flushing neighborhood of the Queens borough of New York City. (Photo by Abbie Parr/Getty Images)

Rafael Montero is a pitcher that’s hard to understand. I mean, I just don’t get him. I used to think Montero pitching out of the bullpen was his big problem … or at least bigger than the problem he was when he started. Since Montero’s big outing against the Reds and his regression to a high pitch count sinker/slider guy who is stuck in between crafty and maddening, it’s hard to know where he fits in, and what his ceiling is. While he certainly isn’t the guy who’s going to be the “fifth ace”, I’m no longer averse to seeing him find a niche in the bullpen as a poor man’s Pedro Strop who can throw slider after slider and frustrate the hell out of opposing batters instead of frustrating the hell out of me. His 102 pitches with 64 strikes through only six innings, while a step up from some of his other recent pitch counts, has me wondering just where he fits in with the Mets or even any other ballclub. There are flashes, but that’s about it.

All that said, the enigma will probably have a place right here with the Mets apparently not even considering adding another starting pitcher, rather looking at back end bullpen arms to help out the staff. So Montero will be here in some capacity because he’s cheaper than Lance Lynn. Good God.

The Mets staged a comeback in the late innings to defeat the Braves on a ninth inning walk off hit by Travis Taijeron, who can only be described by one word in my eyes: lumbering. Everything he does on a baseball field … he lumbers along at it. At least he lumbered well enough to get a game winner off of A.J. Minter. It may be the least awe-inspiring walk-off this season, but it’s better than a strikeout and an extra inning game. That’s the last thing this season needs.