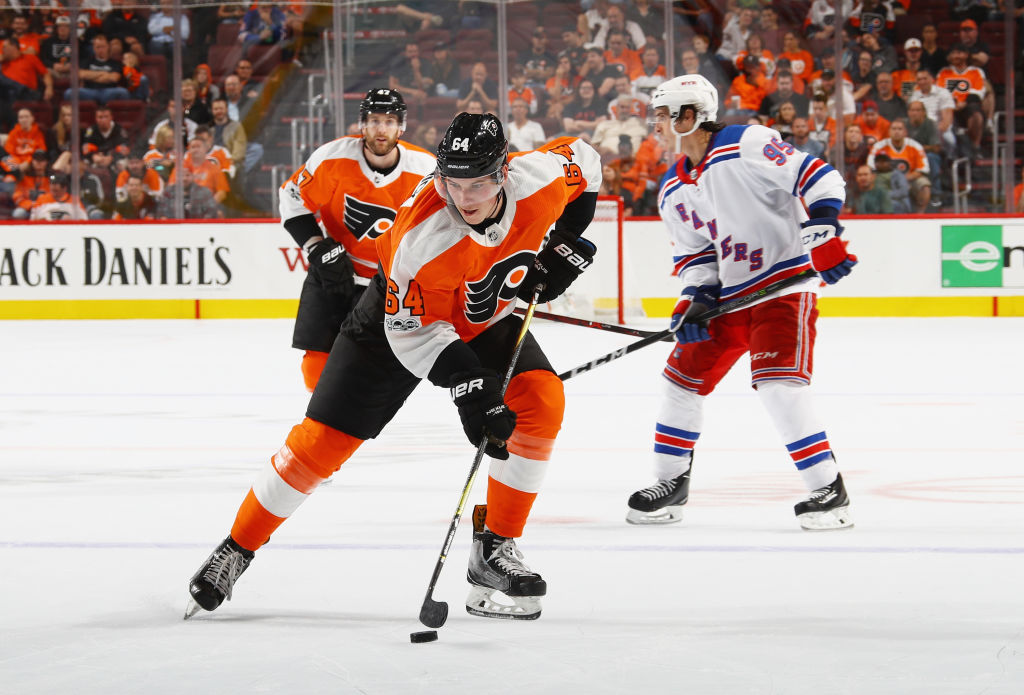 Ah, hockey is back in South Philadelphia. It’s a very welcoming sight, don’t you think? By next Wednesday, we’ll be right in the thick of the regular hockey season. But for now, we enjoyed a Flyers win in front of the home crowd, even if it did go into the fifth overtime of the preseason. (They’ve only played in six games!!) While there are only two games left in the preseason, there are some obvious roster spots up for grabs, but some of the rookies may have already locked them down.

Here are some of the takeaways from the Flyers second preseason win and stats:

1. It’s obvious that Travis Konecny is a man on a mission going into the regular season. He’s scored two goals so far, this preseason including one of his goals being the overtime game-winner vs. the Rangers. And man, that was a tough shot going from the angle. He’s a constant presence in the offensive zone and his speed is just incredible. I keep saying that Konecny is going to score at least 20 goals this season and he’s proving me right.

2. The three rookie defensemen are battling for the last couple spots on the roster. With Provorov, Ghost, Gudas, and Manning all expected to make the opening night roster in San Jose, the final few spots are still up for grabs. However, Monday’s game at Madison Square Garden proved to be a huge night for Sanheim as he scored two goals and had an okay night at the Wells Fargo Center in the second game of the home-and-home series with the Rangers.

It seems like Sanheim is a lock to make the team over Robert Hagg and Sam Morin. However, that last spot is a bit trickier. I’d like to see both Hagg and Morin make the team over Andrew MacDonald as would many Flyers fans. MacDonald had a nice assist that was almost credited as his goal in the third period, but Lindblom just got his stick on it for the deflection and the goal. If anything, I think Morin makes the team over Hagg. Furthermore, if MacDonald is kept on the roster and not send down, it is just because he has a little more NHL experience than Hagg does.

3. Claude Giroux played his second straight night as the left winger on the line with Sean Couturier and Jake Voracek. Monday’s game had them working well together but I think Tuesday night really showed what they could do as a line. Giroux and Voracek had a lot of time on the ice where it was just the two of them going into the offensive zone and you could tell both of them have that chemistry together. It’ll be interesting to see if that line actually stays together going into the regular season.

4. Oh man, Nolan Patrick. If his roster spot isn’t secure by now, I don’t know what will do it. He’s an incredibly impressive passer and manages to find some great no looks to teammates for shots. He’s a consistent pressure in the offensive zone, going in for rebounds and just basically being aggressive around the net. There was one moment where I thought Patrick was going to score in Tuesday’s game around the five-minute mark of the third period, but his shot rang loudly off the post. It will not take long for Patrick to score as long as he continues to do what he does.

5. While I’ve been rambling about the good things that I have seen from the Flyers, there’s one thing that I have neglected to mention, and it’s a doozy. The Flyers power play is not good. The Flyers went 0-for-5 in Tuesday’s game against the Rangers and are a current 0-for-19 in their last three games of the preseason.

Yikes. Yes, they are trying to work with a new system and a new power play coach running the operations. But there haven’t been many shots on goal on those power plays and Tuesday night, the Rangers had two breakaway opportunities. Something needs to happen to the Flyers’ power play unit quickly or the regular season is going to be rough.

The Flyers will be back in action at the Wells Fargo Center tonight as they take on the Boston Bruins.