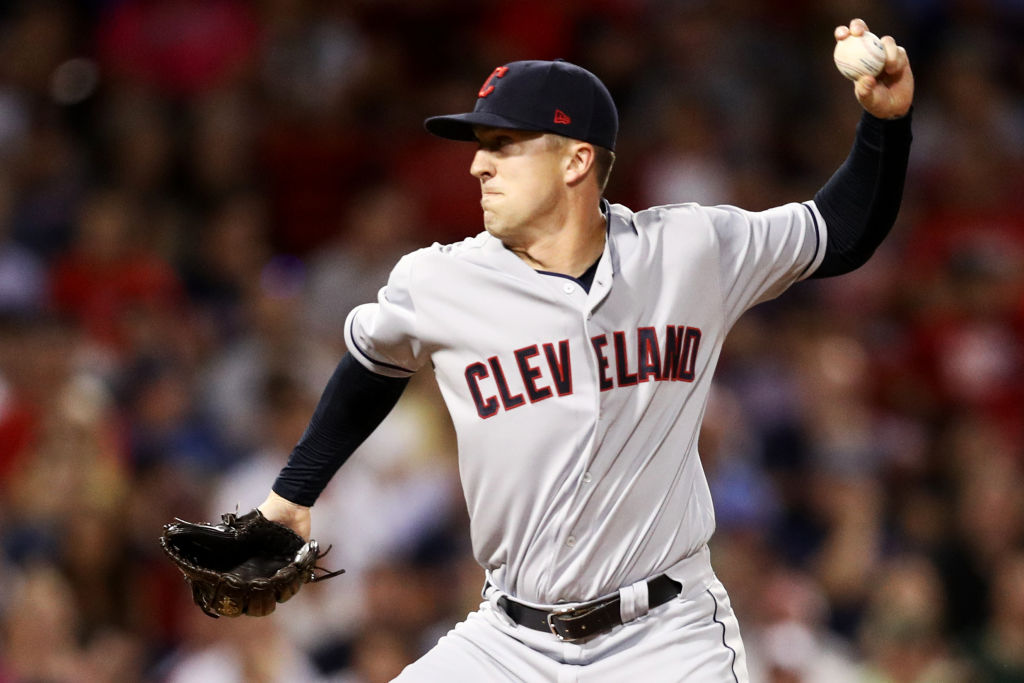 Imagine a situation where it has been preordained that there will be two strike outs, a single, a double and a caught stealing in an inning. Depending on the order, the results could be vastly different. If the inning starts with a single, then the runner is caught stealing followed by the double and two K’s, no run would score. If it started with the two strike outs, however, which were followed by a double, then the single and then the caught stealing, one run would be home. If a pitcher had the first happen, it would likely go down as a forgotten, but successful inning. If the second happened, especially in a close game after the 7th inning, it could be remembered for a long time and give that pitcher a stigma.

While there could be differences in strategy, it’s unlikely that any one pitcher has a talent to control the order the events happen. The pitcher could attack hitters differently with runners on base and bases empty, but generally those pitches that are really blasted were a failed part of the strategy anyway. Overall, these things will even out over time and pitchers who regularly allow more base runners and more extra base hits will allow more runs. This could be an issue for one Indians reliever in the near future.

Since coming to Cleveland, Joe Smith on August 1st after a trade from Toronto and Tyler Olson as a call-up from AAA on July 21st, they’ve had very similar lines:

Well, similarish. Olson has pitched more often, but averaged fewer outs per appearance and both have given up about one base runner per inning with Smith slightly under and Olson slightly higher. Based on the lack of walks, high BABIP and higher K/9, Fangraphs has Smith at a 1.84 FIP compared to Olson’s 2.47, but both are very good numbers. However, if you don’t take the time to look that deep at the numbers, you would think that Smith has been a total failure in his return to Cleveland and Olson some kind of left handed god as Smith sits at a 3.94 ERA and Olson at 0.00.

This isn’t the first time this year that the Indians have had a player vastly outperform his FIP with a 0.00 ERA over an extraordinarily long period. Nick Goody pitched 4.1 scoreless innings in AAA before his April 14th call-up. After, he went 17 games (20.1 innings) spanning two months without giving up an earned run. Since then, he’s posted a 4.36 ERA across 33 innings and essentially played himself out of a spot on the postseason roster. Much of the damage was done in two appearances in August when he gave up five runs combined and he has seen better results in September, but he certainly no longer looks like Mr. Perfect.

In fact, he never was. Over the course of the season, every pitcher is going to have plenty of scoreless innings with some bad games thrown in. When those bad games come early in the season, it can make that pitcher look bad all season. When they happen late, they can form a false sense of confidence about a pitcher who might not be as good as his numbers. In this case, Nick Goody is essentially a reverse Bryan Shaw.

Back to Olson, the situation is a little different. A LOOGY is never going to get the chance to give up two or three runs in a game because if he fails to get his target out, he will almost certainly be immediately removed. He has been pretty good at getting his man, allowing ten of 41 left handed batters faced to reach base (6 by hit, 4 by walk) and struck out ten. Eleven times this year, Olson has had a perfect outing, but in five of those he only faced one batter and in two others he faced just two. This is no knock on Olson as he did his job, but is a partial explanation of the perfect ERA. He has also had four appearances where he faced only one batter and did not do his job, allowing a hit once, walk twice and hit batter in his first MLB appearance. His perfect ERA has been put on the line multiple times and only remains perfect because those pitchers following him have been up to the task and finished the inning without the run scoring.

The good news for Olson is that his job definition should keep him from every being utterly destroyed. He may or may not finish the year with a perfect 0.00 ERA and he will likely be on the post-season roster as a one out man, but he is unlikely to give up more than one run in any game because Terry Francona won’t let him. In further good news, he’s a rookie who has improved as the season has went on. Through September 5th, he walked three, hit one and allowed 11 hits in 12 innings. Since then, he’s allowed three walks and two hits in 7 innings.

Walks weren’t been a problem for Olson in the minors after switching to relief full time and it’s very possible that some rookie jitters cause a lack of control early on. Now that his role has been established and he has been successful in it, that shouldn’t be a problem. In addition, he has been used more often of late in pivotal situations and has come through perfectly with six holds, a save and a win in his last 13 games.

The bad news for Olson is that he has a .260 BABIP, which could be unsustainable, and that he’s been lucky with not just his own sequencing, but that of the pitchers coming behind him. The perfect example of his own was in one of his few full inning appearances in a blow out against Kansas City. He allowed a single, struck out a batter, allowed another single then struck out Mike Moustakas and retired Brandon Moss on a deep fly ball to right. If that order happens a little differently, an inning ending out could have been a sac fly and a run instead.

Any bad news for Olson, however, should be considered good for Smith. He’s had a .318 BABIP and six of his runs have come in just two games. In one, he allowed a seeing eye single, then a double that was compounded by an error. Another Angels double with two outs allowed a second run to score before he had a ground out to end the inning. If the first hit were hit at in a slightly different direction it’s possible neither double ever happens and no runs score. If the doubles happened with less than two outs, it’s possible the runs wouldn’t have scored.

In his other poor appearance, it was another ground ball single that started things off against Boston before another single and a passed ball allowed a run to score. Smith retired two more before Brock Holt hit a double to score a second run. This chased Smith from the game where he didn’t have the luck of Olson as Bryan Shaw allowed a home run to give him a third earned run.

Situations just like these are why individual bullpen ERA is an extremely misleading stat and FIP much more reliable in predicting future results. In that, the Indians lead all of baseball at 3.23 even with their best pitcher, Andrew Miller, missing considerable time. So it wasn’t all luck in the end that no pitcher has allowed one of Olson’s inherited runners to score. It turns out they’re all pretty good back there.