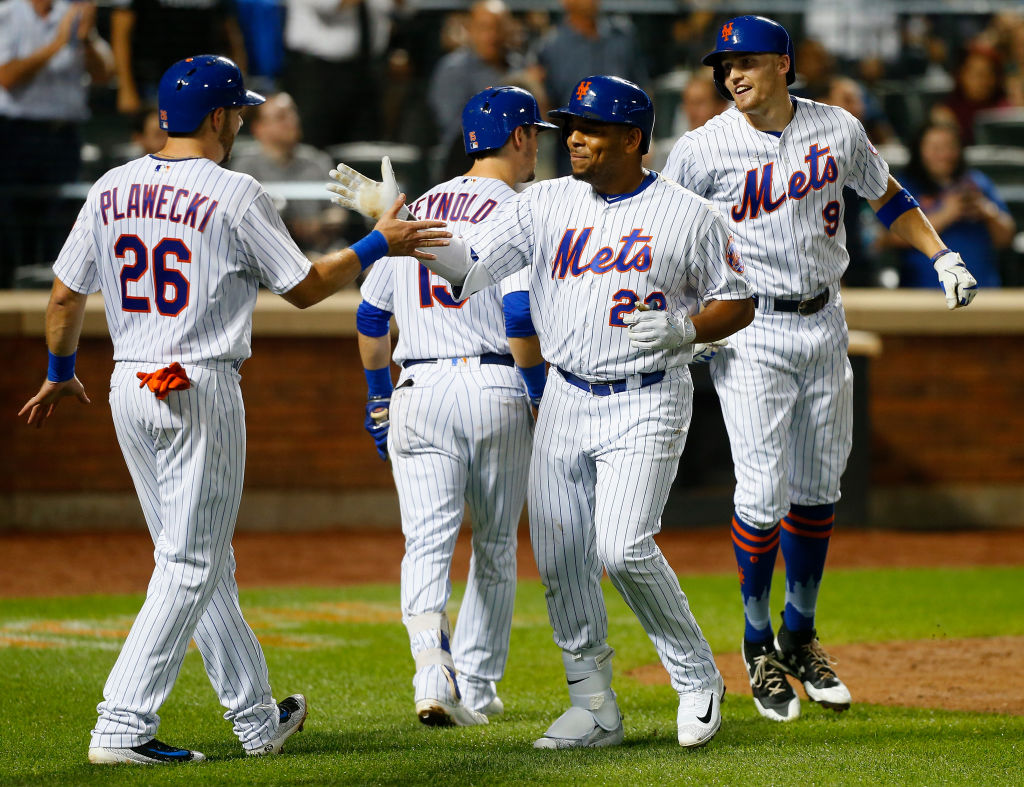 All things must end.

That sad feeling you get when you check StubHub for tickets to future Mets games and this is what you see. pic.twitter.com/N6IV77cqJs

With a 7-1 victory over Atlanta which saw Dominic Smith continue his transformation from the best of John Olerud to the worst of Ryan Howard, the home schedule ended. No more Lazy Mary in the seventh inning, no more Dan & John’s Wings, no more personally witnessing injuries, no more Goya or Taqueria Nachos, it’s all a memory until late March. A memory, like the last memory Citi Field gives you this year: An outgoing manager thanking a right fielder that nobody could have ever expected would be needed in a Mets uniform for all the wrong reasons.

NEW YORK, NY – SEPTEMBER 27: Norichika Aoki #11 of the New York Mets celebrates with manager Terry Collins #10 after defeating the Atlanta Braves at Citi Field on September 27, 2017 in the Flushing neighborhood of the Queens borough of New York City. (Photo by Jim McIsaac/Getty Images)

The 2017 baseball season for a Met fan is a true metaphor for life. Big things are expected. You’re going to take the world by storm and make sure that when people look at you, they do so with respect and acknowledgement. But then things happen that you never expect to happen, like Nori Aoki accompanying this team to the end like a momma duck guiding her ducklings across I-95, because when it comes right down to it you’re never really in control. You think you do enough to be on top of the world, but the world always has other ideas. I expected big things from the Mets this season, and if I had any control over it, they’d be the N.L. East Champions. I really thought they would be even without an outside force controlling everything. But any outside force pulling strings did so in a way that breaks your heart.

But it’s a reminder that when things are this bad, change is needed. I’ve been vocal about my desire for change with this organization, and maybe it’s change for the sake of change. You can argue all you want about what kind of job Dan Warthen as the pitching coach. But the reports that say Dan Warthen is gone is a small part of what needs to be done as players need fresh voices, whether they know it or not. Change scares the hell out of me too, but there are instances where change is necessary. The changes the Mets need are more complex, but they must be done to stay one step ahead of the world (or in this case, the National League). Once October is here there will be plenty of time to discuss the changes that lie ahead (Frank Viola being promoted to pitching coach would be a great start), but the first change that needs to happen is for this calendar to flip to March. The collateral damage to this is that we can’t have a Keith Burger for a while.

The home schedule is over. But there will be next year. Sometimes a season needs to be put to bed for it’s own good. Hell, sometimes even a career needs to be put to bed for its own good, perhaps … a 23-year career that has spanned three places. (Or perhaps 21 years in the same place.) But whatever that change may be, don’t be afraid of it. Winter is coming. Every once in a while that’s a good thing.