Your Morning Dump... Where something good is because of something bad 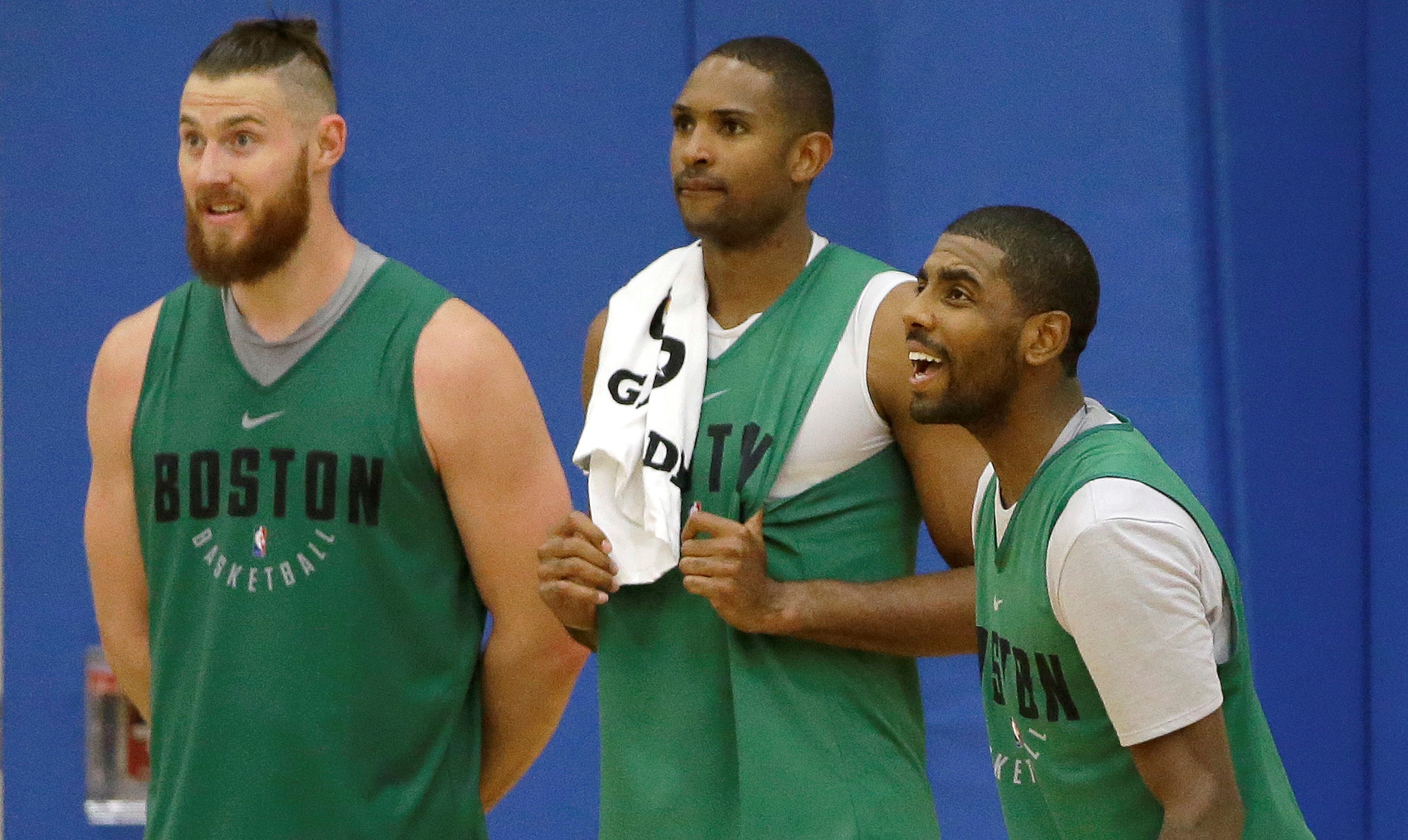 Your Morning Dump... Where something good is because of something bad

Stevens was somewhat cautious in his evaluations of this week, partly because if one player is doing something well, it is most likely because another did something poorly. For example, the Celtics’ defensive rebounding — considered their most likely weakness this season — has been solid this week. But that also must mean that their offensive rebounding has had its flaws.

“That’s the beautiful part about intrasquad scrimmages,” Stevens said, smiling. “Something is going well, you know? Someone is winning, someone made a shot, someone blew a defensive assignment. There is always something to watch.”

“I’ve tried to just throw as much as we can at them,” said the C’s coach. “I’m kind of a big believer in throwing the whole at them and breaking it down later. We’ve put in quite a bit that we think will look good and we’ll have a few exhibition games and a bunch of practices left to continue to adjust that.

“We’ve put in a lot in the first three days. And so we’re still making a lot of errors just out of trying to overthink things instead of just playing freely. And that’s stuff that you build through habit and work. And I think that that’s something we have to continue to work hard on.”

I love the assessment of something going right because something his going wrong. I also love that it was given with a smile because I really do think Stevens relishes the opportunity to knock guys down a peg when they do something nice. It flows along nicely with the “not too high, not too low” mantra.

Also, it’s correct. That’s the whole essence of sports, isn’t it? People compete and try to get the other to make a mistake (or the person just screws up) and you take advantage. We see instances of “wow he scored despite that great defense” often enough… but it’s mostly “he caught his guy off guard” or “he caught the defense napping and cut backdoor.”

So part of the teaching moment is not just to say to the defender “this is what you did wrong,” it’s also to reinforce “when they do this wrong, this is a way to take advantage.”

At this point in training camp, there will probably be more mistakes than successes. Two full days and a walk-through aren’t enough to get any meaningful data on anyone. “Overthinking things” is a big component of things at this point.

As I’ve said many times, thinking is the enemy of success on the court. Being great on the court means reacting… training your body to recognize things right away and immediately understand the options. It requires many people to react the same way at the same time. Often, a point guard like Kyrie has to react to the defense and then his teammates who have also reacted to their own view of the defense. The errors in practice are a good thing because it trains the body and mind what not to do.

It’s a lot like sanding down wood or chipping away at marble. In the beginning it’s kind of ugly but in the end you have something beautiful. The constant repetition trains these guys to stop thinking and react. Something good will happen because of the bad things that happen… and everyone on the court learns something from it.

Page 2: Danny Ainge is lying to us (kinda)

“I think that signing Al Horford and Gordon Hayward, I feel I had a responsibility to give them a chance,” Ainge replied. “I think that that Brooklyn pick, I think can be very, very exciting. I think Cleveland could have a really good pick there, but it’s probably going to be a big man that’s 19-years-old that probably needs a couple of years to develop and could develop in to a franchise player.

“But Kyrie is a proven, sure thing — a guy that’s 25 and can really, really play right now. I think that’s fair for Brad (Stevens), and that’s fair for Gordon and Al. And also it will give a chance for Jayson (Tatum) and Jaylen (Brown) and those guys to develop.”

I agree with my podcast partner Jay King here.

I love Danny Ainge. I think he’s done as good a job as any GM out there. He’s built a champion, torn it down, and re-built a contender. I hold his work in the highest regard.

However, there’s little in that quote that’s actually true. Yes, on the surface, there’s some level of responsibility to the guys recently signed to long-term deals to deliver on a promise. He signed those guys with the promise of “we’re bringing you in to win a title.”

But there’s nothing in that promise that says “we’re bringing you in to win a title with you on the team.”

General Managers say things publicly that are either coded or misleading all the time. This quote is as much letting Horford and Hayward know “yeah, we signed you guys and then blew up the entire team you expected to join but I’m doing it to move CLOSER to a title.”

They need to feel like bringing Kyrie in while refusing to give up Jaylen Brown or Jayson Tatum and building a supporting cast that is only barely able to drink legally is a path to victory. Those guys had their own individual reasons for leaving but the last thing the Celtics needed was two of their most important players thinking “well I didn’t sign up for this.”

So Ainge is telling a sort of lie if you take that quote to say “I owe it to Gordon and Al to build a title team around them.” That’s not true. He doesn’t feel an obligation to build a title around those guys any more than felt obligated to build one around Isaiah Thomas. The instant one of those guys is more valuable to the team in a trade, he will be traded.

Until then, the above Ainge quote is true if you take it to say “I didn’t bring those guys in to be part of a rebuild. I brought them in to advance our championship aspirations and I need to let them know this.”

Let’s all just be good to each other, dammit.

The Red Sox, Patriots, Celtics, Bruins and Revolution are joining the Take the Lead project that was unveiled Thursday at Fenway Park.

It includes a public service announcement featuring a montage of athletes telling fans to “stand for our teams, but don’t stand for racism.”

They say that “if you hear something wrong, offensive or hateful, speak up, say something.”

It’s unfortunate that we have to still do this kind of stuff, but we do, so we will.

There is no place for the bigotry and hate that is so prevalent in America today. In some instances, like when we are in the crowd during a game, we have to step up and make sure it’s not tolerated.

So I will ask all of our fans to join this cause and have the courage to step up and call out anyone who is being hateful and using slurs at a game. If you are at the Garden and someone is throwing these insults at a player or fan, stand up and say something. Bring in an usher, and get that person ejected.

Only when there are consequences for bad behavior like this can we get to the heart of the problem. It’s gone on for too long for us to remain silent.

We are all people, united by our love for basketball and the Boston Celtics. In the Garden, we are a family, and we have to weed out any of those bad apples that hurt our family. They do not represent us. Don’t let them get away with this crap.

BSJ: Gordon Hayward’s former position coach reveals an inside look at his progression

Herald: Jaylen Brown looks to up his defensive play for the Celtics  |  Bulpett: Celtics big man Guerschon Yabusele making a name for himself