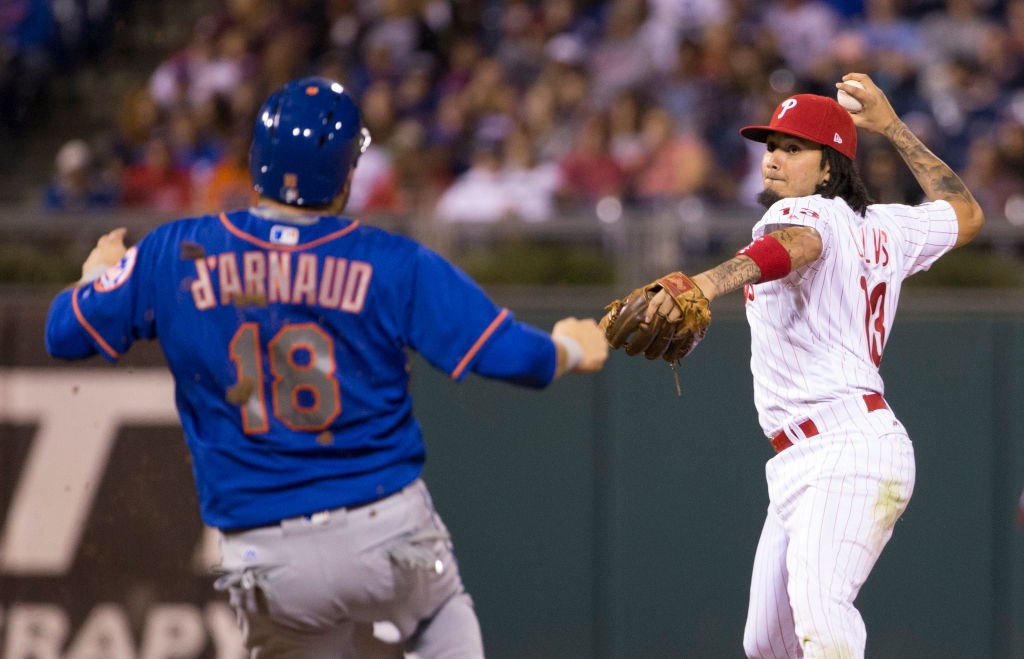 The New York Mets (69-91) simply can’t wait for this season to end. Matt Harvey summed up last night’s loss to the Philadelphia Phillies (65-95) perfectly when he said he was glad “this miserable season” was over for him. It is almost over for the rest of the Mets, but first they have to finish this weekend series with the Phillies. First pitch for the middle game of this three game set is scheduled for 7:05 pm at Citizen’s Bank Park.

PHILADELPHIA, PA – SEPTEMBER 29: Freddy Galvis #13 of the Philadelphia Phillies turns a double play against Travis d’Arnaud #18 of the New York Mets in the top of the sixth inning at Citizens Bank Park on September 29, 2017 in Philadelphia, Pennsylvania. The Phillies defeated the Mets 6-2. (Photo by Mitchell Leff/Getty Images)

The Mets will send right hander Seth Lugo (7-5, 4.72 ERA) to the mound tonight for his final start of the season. Lugo pitched well in his last start, tossing six shutout innings to defeat the Atlanta Braves last Monday. Jacob deGrom was originally scheduled to start tonight’s game for the Mets, but he was scratched due to gastroenteritis and will not pitch again this season. The Phillies will counter with veteran right hander Henderson Alvarez (0-1, 3.60 ERA), who is attempting a big league comeback after missing nearly two full seasons due to a shoulder injury. Alvarez pitched well in his last start, tossing five shutout innings against the Braves last Saturday, but did not factor in the decision. The Phillies went on to lose that game 4-2.