Are the Canucks the New Oilers? 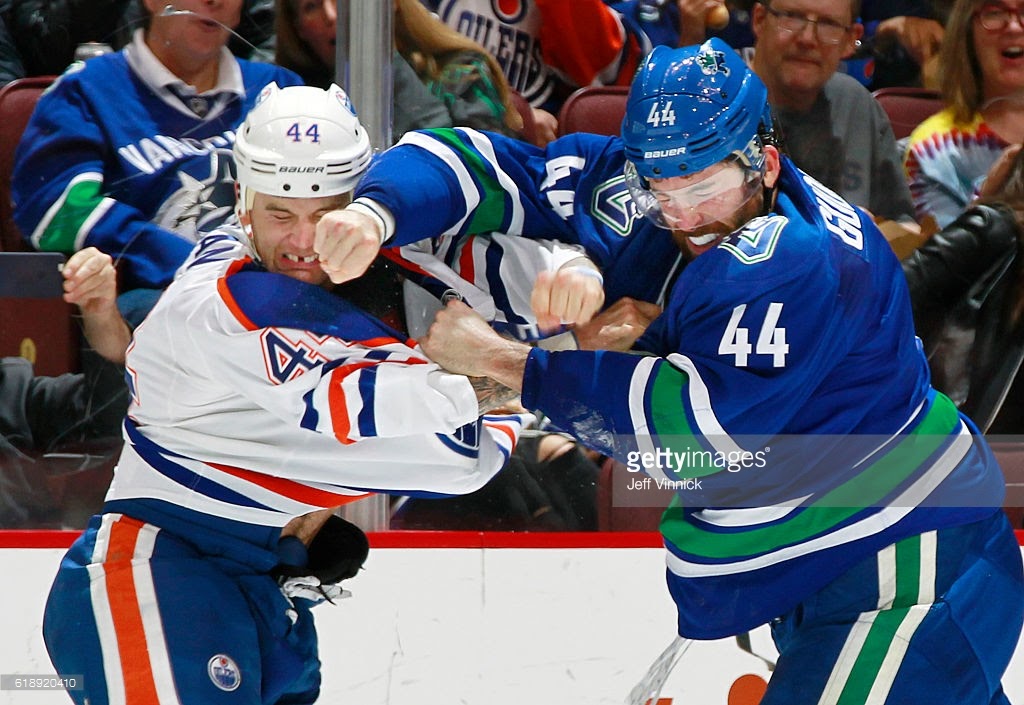 Are the Canucks the New Oilers?

Are the Canucks the new Oilers?

This question was put to me by a hockey fan via twitter a few months ago and I had promised then that I’d get around to writing about it (apologies for the delay).

It is an interesting question. It seems every decade or so there is some team in every league who set the standard either at the top or the bottom of the food chain. These teams becomes something of a flagbearer and fans are drawn to compare and contrast.

To do this we’d best begin to figuring out where the Canucks really are.

Their ownership group has proven in the recent past to be somewhat meddlesome, telling their then-GM Mike Gillis to fire Alain Vigneault and hire John Tortorella, an ill-advised move at the best of times but one that resulted in the team posting their worst win percentage since 1999-2000.

The organization has gone through several GMs over the past thirteen years, from Brian Burke (2004) to Dave Nonis (2008) to Mike Gillis (2014) and now Jim Benning.

During that time the team has also gone through several coaches, most recently the Tortorella experience giving way to Willie Desjardins and then to Travis Green.

The Canucks won Presidents Trophies in 2011 and 2012 and went to a Stanley Cup Final in 2011 before the bottom seemed to fall out in 2015-2016. We’re now two seasons in to what is officially a rebuild, though to be honest the beginning of the end probably dates back to 2013-14.

Comparisons between the Canucks of today and the Oilers during the Decade of Darkness are not going to be in lock-step however, there are some common elements.

Oilers ownership, first under the EIG and then Darryl Katz, resisted the idea of entering a rebuild instead insisting that the team needed only land one or two major free agents to become a contender.

They tried this by pursuing Thomas Vanek, Dustin Penner, Dany Heatley, Nikholai Khabibulin and Marian Hossa. They hit on two of those and yet still ended up in the exact spot they were trying to avoid, the basement, suggesting that the free-agent fix was not the problem and perhaps the issue ran deeper than a 1st line winger or starting goaltender.

The Canucks added Ryan Miller and then changed their coach and GM who in turn added players like Sutter, Eriksson and Gudbranson, believing that all these changes where the catalytic agents needed to turn a declining franchise back into a dominant one.

Both franchises were gravely mistaken, on many fronts.

The way in which I see the Canucks as being like the Oilers-of-old is they have a largely bankrupt prospect base, a roster which is not only out of balance but talent-deficient (within the relative context of the intense parity of the modern, salary-cap era NHL) and a management team that has demonstrated a concerning lack of ability in the areas of talent identification, acquisition, and objective internal perspective.

It took a lot of scorched-Earth before the Oilers finally turned things around. Along the way they squandered or sold-off nearly every early windfall they’d received from Taylor Hall and Jordan Eberle to Justin Schultz and Nail Yakupov.

Is there any indication that the Canucks are on any steeper a learning curve?

They moved out several high-value veterans in Ryan Kesler, Roberto Luongo and Kevin Bieksa.  In exchange they received Jacob Markstrom, Nick Bonino (whom they later traded for Brandon Sutter), Jared McCann (whom they then traded for Eric Gudbranson), Derek Dorsett and Filip Gustavsson.

The Canucks enter this season with that franchise’s two most significant assets in a generation going into the final year of their contracts as the Sedins are set to become free-agents this coming July. If management can recoup some significant assets in exchange for those two players at the trade deadline, AND if they can overhaul and improve a drafting system that has been a major weakness of the organization going back well past a decade, AND if they can properly assess and invest in those player assets who are most likely to be beneficial long-term, then perhaps they will improve within a relatively short period of time.

There is very little evidence in this management group’s body of work to suggest that they are capable of accomplishing all these things in so short a time.

The Oilers bled talent from Hemsky and Petry to Hall before things finally, at long last, began to turn around. They deluded themselves every summer that the coming season would be better. They’d be healthier, more mature, that a depth defender on another team could come in and thrive here when asked to play a greater role.

That this time it would be different.

They went through coaches, GMs, players and prospects as though there was an endless supply. And to the rest of the league’s great chagrin, they were rewarded with draft lotteries and high picks, stockpiling years worth of high-end talent that many felt ought to be more widely dispersed around the league.

All of it proved to be in vain because ownership meddled, management stumbled and the team collapsed even further in on itself.

So we’re back to asking, are the Canucks the new Oilers?

Is the ownership part of the problem? Yes.

Is management obstructing their own path to success? Yes.

Do they have enough internal talent around which to rebuild? No.

Does this necessarily mean they will spend the next decade outside the playoffs, a doormat to the rest of the league? No.

Why? Because what we witnessed in Edmonton was a perfect storm of circumstances and a legacy of poor management and developmental cost-cutting come to roost all at essentially a narrow point in time.

The Canucks, for all their faults, are not in such dire straits, though neither are they so far removed from it as to suggest they should be comfortable that any rebuild under the current regime has a reasonable likelihood of success.

I do not expect the Canucks to either rebuild quickly and effectively nor to fall to the despairing depths of the league.

The Canucks may be assisted in this last point by the perennial struggles of the Arizona Coyotes but also by the inclusion of the expansion Golden Knights and the end result of whatever it is that Joe Sakic is doing to the Colorado Avalanche.

The Oilers, during their long tenure beneath the feet of seemingly every NHL team, were the “whatever it is that Joe Sakic is doing to the Colorado Avalanche” team of their era.

There are similarities between where the Oilers were and where the Canucks are, but I don’t think they are necessarily duplicated. Rather, I think that struggling franchises, at least in the NHL, often but not always have some of the same root causes.

Interfering ownership, addled management in over their heads, lack of talent, poor scouting and development processes. You could apply these things broadly to any number of repeatedly struggling franchises from the Oilers to the Canucks to the Avalanche to the Sabres to the Islanders and so on.

It seems that one of the hardest things for organizations to do in the NHL is to take a step back, assess the situation objectively, and make the hard choices to at least try to correct the issue.

Instead they try to think themselves out of trouble, not realizing that those trying to solve the problem may themselves be it.

Every team has it’s turn at the bottom end of the standings. At the same time they also have the opportunity to define their own path to such miserable ends. In other words, no two dumpster fires have the same stench.