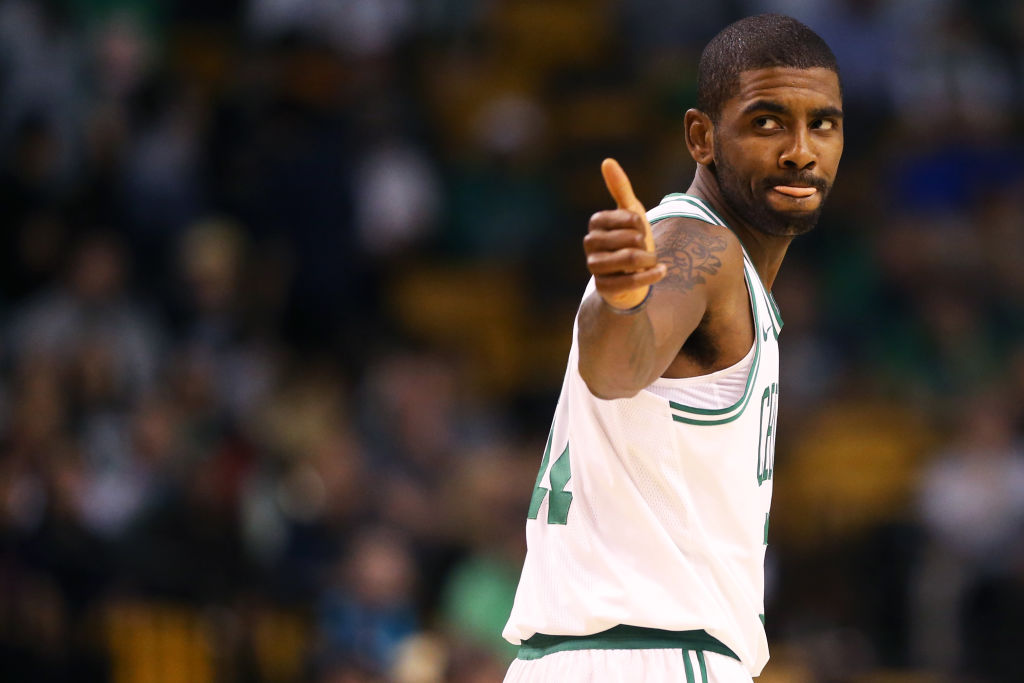 HEY Y’ALL. Miss me? (Don’t answer that.) The NBA hardly took a break during the summer, so it didn’t feel like an offseason, aside from, y’know, the whole “teams not playing games” thing.

And now, ball (and life) is back. Preseason, as we all know, doesn’t usually mean much, but considering how radically different this year’s roster is from last, getting an advance look carries at least some weight when attempting to project the squad’s chances as–certainly in this conference–a potential championship contender.

I expected the Celtics offense to look smooth, and it certainly did–the squad getting excellent shot opportunities (which didn’t go in, but for exhibition purposes, creating good shots is just fine). The movement of the starters as a collective featured the precision we now expect from Brad Stevens’s offense.

While I’m not sure if this lineup, of Kyrie, Jaylen Brown, Hayward, Al Horford and Aron Baynes, is anything we can expect to see with regularity, evidence of its relative cohesion should reassure us. Baynes looked hesitant once or twice, but that’s likely a product of adjusting to the Celtics pace as compared to the halfcourt-heavy teams Baynes previously played for in San Antonio and Detroit. More importantly he looked comfortable on both ends of the floor more often than not.

Before we get too excited, Boston also let Charlotte take a lead, after being down more than 10, right at the beginning of Q2–with a 15-0 run, no less. If you’re wondering whether the removal of starters from the lineup and this comeback are connected, STOP DRILLING YOU’VE HIT OIL. The Hornets aren’t historically a matchup problem for the Celtics, but a combination of slouching, however momentary, and rookie inexperience will potentially let any opposing squad back into a game. Charlotte’s lead didn’t last long, although the need to bring back the starters to achieve such a comeback is mildly discomfiting.

Predominant first-half takeaways: Slimmed-down Marcus Smart’s 3-point shot looked fantastic, and if it’s halfway sustainable–let’s say, 37 percent–that makes him a respectable offensive threat. Kyrie looks happy to pass, still doing offensive damage without constantly defaulting to ISO/anklebreaker drives (though I’ll be real happy to see those in the regular season when the team needs them). Horford looks to be in playoff form. Hayward is, at least in a small sample, every bit the complete player the Cs fanbase has anticipated.

As expected, Stevens pulled the starters in the second half and the game became considerably less interesting, though not without its pleasures: A devastating Brown dunk, respectable backup floor-generalship by Shane Larkin (I swear that’s not a typo) a few nice plays by Abdel Nader and some remarkable two-way effort from Daniel Theis, which I definitely didn’t expect. Of the rookies to get significant tick, the fan-beloved Guerschon Yabusele didn’t do a whole lot and made some clumsy fouls, but the team doesn’t need him to now, so it’s no skin off anyone’s ass.

Little of note occurred in the final frame, aside from Theis working his way to a team-best 12 points and some promising play from Semi Ojeleye. Despite the competitive first half, the Celtics came away looking sharp with a 94-82 victory.

[Note: We at Red’s Army plan to shake up the recap format going forward, but just like Brother Brad with lineup trickery, we’re still goofing around with stuff. Expect things to change.]

THE HOT (AND NOT)

Not: Dwight Howard’s general existence, free-throw shooting and minimal-even-even-by-preseason-standards effort; Jayson Tatum and Yabusele looking more uncertain (at least at first) than I’d like; the bench’s initial shakiness against a so-so Hornets bench. Again, it’s preseason, so take all this with several salt crystals.

We’re gonna be seeing this a lot:

With a jumper off the screen, @KyrieIrving splashes home his first bucket as a Celtic! pic.twitter.com/l928tHTOOM

Shane Larkin bounces a sweet dime to Daniel Theis for the jam! pic.twitter.com/T3I9LLu6Tz

WHAT THE HELL WAS THAT???

Those of us who watched live know that there couldn’t possibly be any other moment for this new segment than Tommy Heinsohn’s inexplicable reference to Aron Baynes’s…purportedly prodigious physical gifts:

Boston get a hold of your announcers.

You did what, Tommy Heinsohn? pic.twitter.com/IN3OxABAru

This season’s gonna rule. It will be the realest and coolest of real cool times.