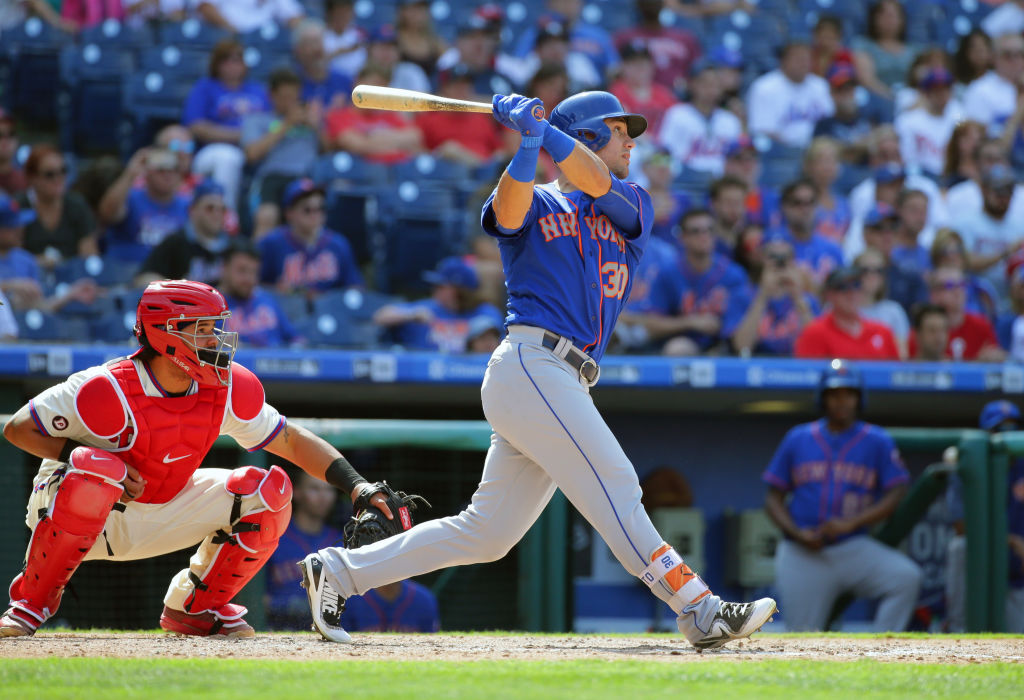 Now that the 2017 season is over, its time to take a look back at the year that was for the New York Mets. It was a disappointing season for the Mets, who began the year with World Series hopes and ended it as a 90 loss team, so it is worth looking back to see what went wrong. Over the next several days we will look at the offense, starting pitching, bullpen, and coaching staff to see where the Mets can improve. Today we’ll take a look at the Mets’ offense.

PHILADELPHIA, PA – AUGUST 13: Michael Conforto #30 of the New York Mets bats in the seventh inning during a game against the Philadelphia Phillies at Citizens Bank Park on August 13, 2017 in Philadelphia, Pennsylvania. The Mets won 6-2. (Photo by Hunter Martin/Getty Images)

The Mets’ offense was a weird unit this year, setting a franchise record for homers (224) but ranking 19th in the major leagues in batting average and runs scored. The group was also radically reshaped by injury and trades, leaving it a much different offense than the one that began the year. Let’s take a look at each position and give it a 2017 grade.

Catcher: Travis d’Arnaud was inconsistent for much of the season, but ended up producing his best counting stats by setting career highs in home runs (16) and RBI’s (57) thanks to a strong finish. Kevin Plawecki looked very impressive after his latest minor league recall, batting .303 in the second half as he looks to have finally put things together. As a unit, which includes the contributions of the departed Rene Rivera, Mets’ catchers batted .251 with 27 homers and 91 RBI’s. That is strong production from the backstops, which provides some hope for the Mets going forward.

First Base: First base was a bit of a revolving door for the Mets, with four different players (Lucas Duda, T.J. Rivera, Dominic Smith, and Wilmer Flores) getting significant time there. Duda’s much maligned Mets’ career finally came to an end in July, when he was dealt to the Tampa Bay Rays, opening up first for Dominic Smith. Smith struggled to adjust to the big leagues, hitting .198 with nine homers and 26 RBI’s in 49 games, and even his well regarded defense was questionable at best. Flores bounced all over the infield but his 2018 home may be a first base platoon with Smith thanks to a strong finish, while Rivera best projects as a utility man. Mets’ first basemen hit only .242 on the year with 34 homers and 88 RBI’s as a group, providing respectable power numbers but room to improve going forward. The position will end up being far more of a question mark than the Mets initially anticipated due to Smith’s struggles to adjust to the majors.

Second Base: The Mets started 2017 with Neil Walker at second base, and he played well for the first two months of the year before a hamstring injury sidelined him for six weeks. Walker came back in August and was dealt to the Milwaukee Brewers, making second base a committee position for the last two months of the season. Jose Reyes spent the most time there, finishing strong to make a case for the Mets to retain him next season. The Mets also gave some playing time to Gavin Cecchini and Matt Reynolds, who weren’t really impressive, and the surprisingly effective Phillip Evans as well. Mets’ second basemen hit .255 with 19 homers and 72 RBI’s in 2017, but there is no clear second baseman on the roster for next season.

Third Base: Third base was another revolving door for the Mets. David Wright, who the Mets hoped would be their starter this season, didn’t play a game in 2017. That left Reyes as the Opening Day third baseman, and his poor start led to him losing playing time to Flores and Rivera. The Mets eventually switched him and Asdrubal Cabrera by the summer, and Cabrera stayed there for the rest of the season. Cabrera had a resurgent second half and handled himself well defensively at third, all but assuring the Mets pick up his team option for next season. Wright is hoping to play next year, but Cabrera will likely be the Mets’ insurance policy at the position. Mets’ third basemen hit .269 with 16 homers and 76 RBI’s on the year, a surprisingly effective stat line given how many players started at third.

Shortstop: Shortstop was yet another messy position for the Mets in 2017. Cabrera started the year at shortstop but had clearly lost a step, necessitating a position switch. The Mets opted to move Reyes back to short and shift Cabrera to second base in Neil Walker’s absence, and in classic Mets’ fashion they botched it to the point that Cabrera demanded a trade. Cabrera rescinded his request eventually and the Mets let Reyes play the position until they recalled top prospect Amed Rosario in August. Rosario was an immediate upgrade at the position defensively and showed flashes of his potential, batting .248 with four homers, 10 RBI’s, and seven stolen bases. The Mets will hand Rosario the shortstop spot in 2018 and hope he continues to grow. As a unit, Mets’ shortstops batted .258 with 21 homers and 64 RBI’s, a respectable tally with all the change.

Outfield: The Mets began 2017 with four outfielders for three spots and ended the year with none of those players starting. Yoenis Cespedes hit when healthy but missed several months due to hamstring injuries. Michael Conforto had a breakout season, making the All Star team and establishing himself as a future star, but his 2018 status is in a bit of doubt due to season ending shoulder surgery. Jay Bruce and Curtis Granderson both hit well with the Mets and were traded, opening up playing time for younger players like Brandon Nimmo and Juan Lagares. Nimmo showed some promise and Lagares continued to struggle against right handed pitching, leading to questions about whether it was viable to platoon the two of them in center or simply trust one of them with the job. Late addition Nori Aoki also hit pretty well, batting .284 after joining the team in September and stating a case for a backup role next season.