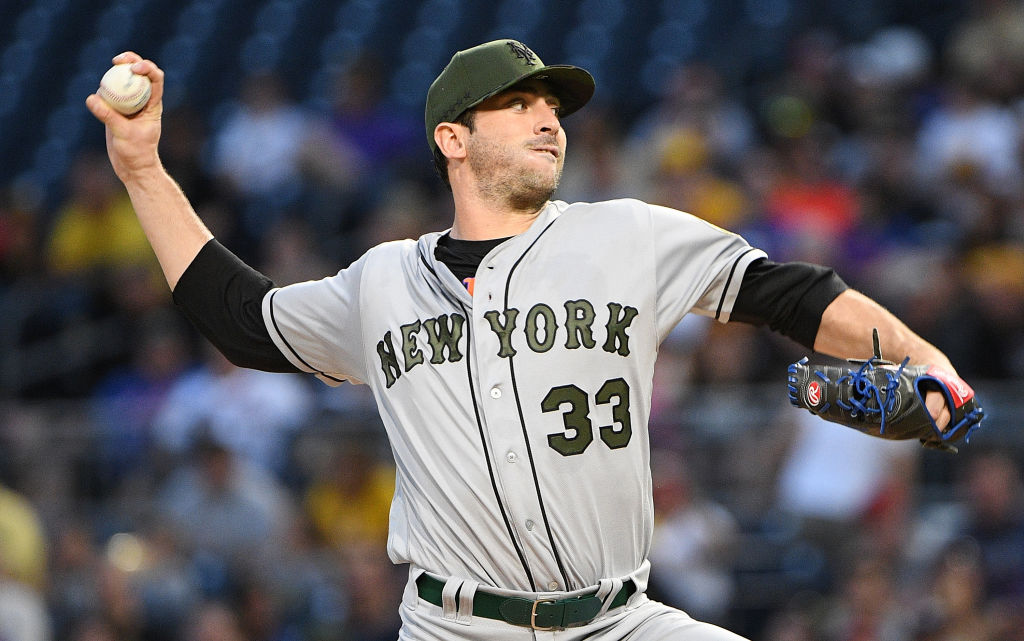 Now that the 2017 season is over, its time to take a look back at the year that was for the New York Mets. It was a disappointing season for the Mets, who began the year with World Series hopes and ended it as a 90 loss team, so it is worth looking back to see what went wrong. Over the next several days we will look at the offense, starting pitching, bullpen, and coaching staff to see where the Mets can improve. Today we’ll take a look at the Mets’ starting pitching.

PITTSBURGH, PA – MAY 28: Matt Harvey #33 of the New York Mets delivers a pitch in the first inning during the game against the Pittsburgh Pirates at PNC Park on May 28, 2017 in Pittsburgh, Pennsylvania. (Photo by Justin Berl/Getty Images)

The Mets entered the season expecting their starting rotation to carry them. The group carried some risk, especially since four of the projected starting five entered the year coming off of surgery and veteran safety net Bartolo Colon wasn’t retained. Despite that, the Mets felt confident in their rotation, notably touting that they felt like they had seven viable starting pitchers in spring training. That overconfidence would come back to bite them. Let’s take a deeper dive into the starters the Mets ended up using this year, in order of their first starts.

Noah Syndergaard: Syndergaard came out of the gate hot, posting an outstanding 30:0 strikeout to walk ratio over his first four starts of the season. Things took a weird turn in the last week of April, when Syndergaard had a start pushed back after a rainout due to a sore elbow. Syndergaard refused to undergo an MRI requested by the Mets and declared himself healthy to pitch. The Mets put Syndergaard back in the rotation on April 30th against the Washington Nationals, and that day would essentially go down as the end of the Mets’ season. Syndergaard was shelled for five runs in 1.1 innings before leaving with a partial lat tear. That injury kept Syndergaard on the shelf for pretty much the entire season, save two meaningless appearances in late September that served as confidence boosters for the Mets’ ace.

Jacob deGrom: deGrom was the Mets’ best pitcher in 2017, setting career bests for innings pitched (201.1), strikeouts (239), and wins (16) while posting a 3.53 ERA. All of those figures led the Mets, and deGrom was the only starter to remain in the rotation from the start of the season until the finish. The Mets actually went 17-14 in games started by deGrom, a true sign of how valuable he was in a season they lost 92 games.

Matt Harvey: The Mets had high hopes that surgery to address Thoracic Syndrome would bring back the old Matt Harvey. Things looked good in Harvey’s first few starts of the season, but advanced metrics indicated he was going to get hit hard quickly. That happened quickly for Harvey, who looked lost for the next two months until he landed on the disabled list with a stress injury in his pitching shoulder. That injury knocked out Harvey for two and a half months, and when he returned he actually pitched worse than before, going 1-4 with an 11.28 ERA in September. Harvey finished the year with an ERA close to seven, leading some to question whether or not the Mets should tender him a contract. The Mets plan on keeping Harvey in 2018, but the last two years have been a nightmare for him.

Zack Wheeler: One of the bright spots for the Mets in the early season was the return of Zack Wheeler from a two year layoff following Tommy John surgery in March of 2015. Wheeler was inconsistent early but settled into a groove by the end of May, looking like the Mets’ best starter for a few weeks. Things fell apart for Wheeler in mid-June, when he was shelled in back to back starts before landing on the disabled list with elbow fatigue. Wheeler came back after a disabled list stint and struggled through four more starts before the Mets finally diagnosed him with a stress injury to his pitching elbow. That new injury landed Wheeler on the shelf and the Mets wisely shut him down for the season once they saw they were going nowhere.

Robert Gsellman: Outside of Harvey, there might not have been a bigger disappointment on the Mets’ pitching staff than Robert Gsellman. Gsellman followed up a breakout finish to 2016 with a strong spring to earn a rotation spot, but once the season started things went very poorly. A string of bad starts saw Gsellman get temporarily demoted to the bullpen, and that appeared to fix him for a bit before Gsellman got back into bad habits. The injury bug got Gsellman in late June, when he pulled his hamstring in Miami and was gone for six weeks. Gsellman hit another low note when he responded to criticism from General Manager Sandy Alderson by saying he didn’t care about performing better to earn another big league shot. After apologizing for his temper tantrum, Gsellman came back to the majors and was inconsistent again down the stretch.

Rafael Montero: Montero pitched his way onto the Opening Day roster with a strong spring training and did his best to try and pitch his way off of it with a terrible April. The Mets stubbornly stuck with Montero for nearly two months before finally demoting him to the minor leagues. Montero appeared to figure something out during that trip to Las Vegas, returning to the majors in mid-June looking like a much different pitcher. A pair of strong relief outings earned Montero a spot in the rotation, and he held it for the remainder of the season, showing some of the promise the Mets were hoping for in a strong stretch in July. Montero’s biggest problem remained throwing strikes, however, as he looked brilliant when he attacked the strike zone and mediocre when he nibbled.

Tommy Milone: The first band-aid the Mets applied when they needed rotation help was Milone, who they claimed off waivers from the Milwaukee Brewers in May. Milone had a strong first start, toying with a weak San Francisco Giants’ lineup, but was hit hard in his next two before landing on the disabled list with a knee injury. That injury sidelined Milone until August, when he returned for two starts before being dumped to the bullpen once rosters expanded in September. Milone made a few relief appearances before being shut down with ten days to go due to a bone spur in his elbow.

Tyler Pill: Rookie Tyler Pill earned a shot in the big league rotation after posting dominant stats in the minor leagues. The Mets gave Pill three between May and June and he was predictably hit hard, getting demoted back to the minor leagues after a rough game at Dodger Stadium on June 21st. Pill’s lack of dominant stuff made him eminently hittable, a bad combination with the Mets’ poor defense. The Mets used Pill in the bullpen a few times, where he looked better, but he was shut down in late August after undergoing arthroscopic elbow surgery.

Steven Matz: Matz’s season debut was delayed by two months due to vague elbow pain that the Mets couldn’t properly identify. After a lengthy rehab process Matz finally made his debut in Atlanta on June 10th, tossing seven innings of one run ball to help the team sweep a doubleheader. Matz’s next four starts were solid too, but the wheels fell off in his final start of the first half, when he gave up five runs in 4.1 innings against the St. Louis Cardinals. Things continued to spiral out of control for Matz in the second half, as he made seven mostly ineffective starts and struggled with his command. The Mets finally figured out that Matz was pitching with nerve irritation in his elbow in August, the same injury that ended deGrom’s season in 2016. Matz was shut down and underwent surgery to relocate the nerve shortly afterwards, and the hope is that Matz will be able to bounce back from the procedure as well as deGrom did this season.

Seth Lugo: Lugo was the other Mets’ starter to start the year on the disabled list. After a strong showing for Puerto Rico in the World Baseball Classic, Lugo came back to spring training and pitched poorly, leading to an exam that revealed a partial UCL tear. Rather than undergo Tommy John surgery, Lugo opted to rehab the injury and was able to rejoin the Mets’ rotation on June 11th. Lugo, who had pitched to an ERA of 2.67 in 2016, was much more hittable than he was a year ago. That isn’t entirely surprising since advanced metrics indicated that Lugo’s ERA should have been significantly higher in 2016, and he ended up being inconsistent for the rest of the season, even landing back on the DL for 10 days in August. Lugo did finish the season in the rotation, but the Mets don’t know what they will get out of him next season.

Chris Flexen: Injuries forced the Mets to rush Flexen in the big leagues in late July simply to have a warm body in the starting rotation. Flexen, who had been promoted from AA Binghamton, had his share of struggles but acquitted himself pretty well as a rotation member in August. The Mets eased off of Flexen once Harvey returned from the DL in September, using the rookie in mostly mop up relief work the rest of the way.