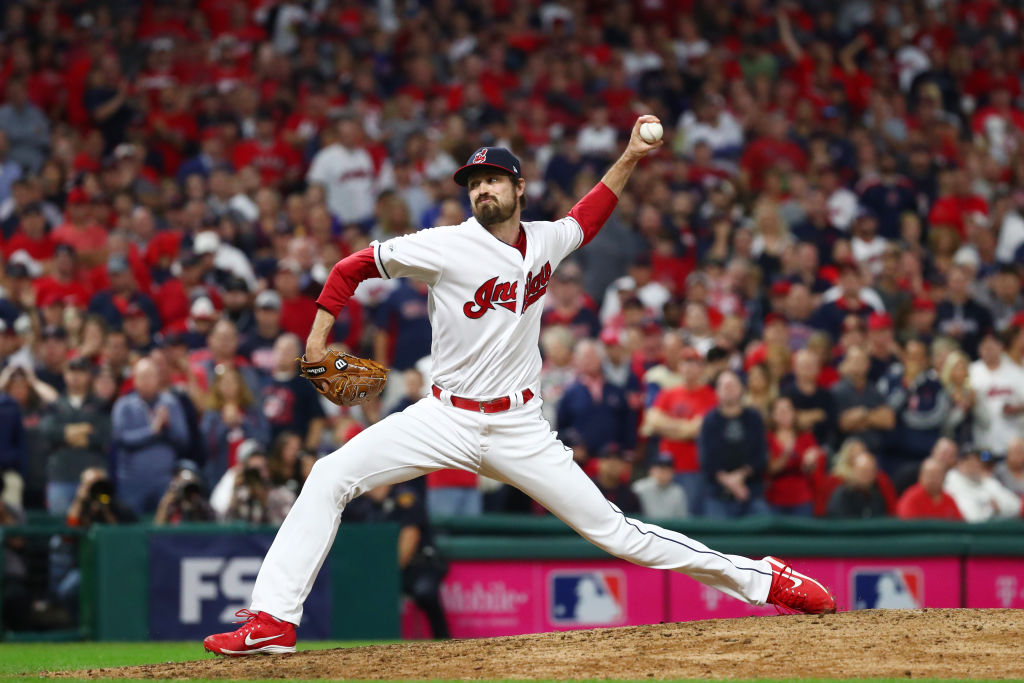 Trevor Bauer started the ALDS for Cleveland in 2016 as well and had a similar result, beating Boston last year, but taking things to a new level against New York in 2017. Jay Bruce provided all the necessary offense and Andrew Miller and Cody Allen locked it down to close it out.

Trevor Bauer started off the game by painting the corners with some beautiful curves, dancing around the zone to avoid any contact. After he got Brett Gardner to pop out to Francisco Lindor in short left, Bauer struck out Aaron Judge looking and Gary Sanchez swinging to end the inning without a base runner.

Sonny Gray had a slower start, but similar success in the bottom half. He walked Lindor to start the game, but after three ground outs, the Yankees ended the inning with Jason Kipnis, who was safe on a fielder’s choice and moved up on a ground out and a wild pitch, stranded at third.

After two quick grounders in the second, Bauer allowed his first base runner with a four pitch walk to Greg Bird. After a scary moment for Bauer when Todd Frazier blasted a foul ball just left of the home run porch, Bauer came back with a fastball low and outside for the swinging K.

Jay Bruce would lead off the bottom have with a double off the big wall in left for the first hit of the game from either team. Carlos Santana quickly advanced him with a single to right, but he was held at third. After Lonnie Chisenhall was hit by a pitch to load the bases, Gray induced a double play, allowing the run to score from third. Giovanny Urshela then weakly popped out to right to end the inning with the first run of the game already brought home by Cleveland.

Two controversial decisions made by Terry Francona for this game came to a head in the top of the third. First, Kipnis was tested for the first time this season in center field when Chase Headley popped one into left center. Ranging to his right, Kipnis made a fine diving catch after a long run for the first spectacular defensive play for the Tribe during this post-season. Bauer then continued to prove he was the right guy to start game one with a strike out of Aaron Hicks, his fourth the first time through the line-up.

The bottom half would be the first easy inning for Gray as he struck out Lindor swinging and Ramirez looking around a Kipnis fly out.

Bauer struck out Judge for the second time to start the fourth on a check swing against a breaking ball in the dirt, but the ball got beyond Roberto Perez, allowing Judge to reach. This was a situation that wouldn’t last long as one pitch later Sanchez grounded into a double play to Urshela to clear the bases again. Bauer then put down Didi Gregorius on strikes to finish another scoreless inning.

Some of the tension of this one run game finally dissipated when it was no longer a one run game. Edwin Encarnacion walked to start the bottom half of four, then Jay Bruce followed through with a 105 MPH line drive of a home run out to right. Santana would walk to make it three straight to reach against Gray before Chisenhall popped out on an infield fly. Gray would last just one more batter as he was pulled following a walk to Perez.

Against Adam Warren, Urshela would single, but Santana got a bad break and was unable to score. Warren then K’d Lindor swinging on a couple pitches in the dirt and retired Kipnis to end the inning with the bases loaded for the second time.

In the fifth, Bauer changed things up by not striking out a batter, but again set them down in order with two fly outs and a ground ball.

Warren would stay in for the fifth, but was pulled after just two hitters. Ramirez started the inning with a single, then took second on a pitch that was just slightly misplayed by Sanchez. After Encarnacion fouled out, Joe Girardi went to his bullpen again, bringing in Jaime Garcia to face Bruce, who was looking for his third extra base hit and RBI of the game. While he wouldn’t get the extra base hit, Bruce would knock in that third run thanks to another wild pitch, this one from Garcia, before Bruce flied out to left to bring home Ramirez. Santana made a bid to add another run, but flew out to Aaron Hicks just in front of the wall.

Bauer’s no hit bid ended with one out in the sixth when Hicks crushed a double off the wall in left. Despite pitching in the odd situation of having a runner on, Bauer got an out on a ground ball to first, then struck out MVP candidate Judge for the third straight time.

The Indians used their first pinch hitter to start the sixth as Austin Jackson came in for Chisenhall and struck out against Garcia. Perez then walked and took second on a wild pitch to Urshela, who struck out. Garcia then intentionally walked Lindor to get to Kipnis who flew out to end the inning.

Breaking all expectations, Bauer came out to pitch the seventh and recorded the first two outs before allowing his second hit of the game, a single by Starlin Castro. This pushed Bauer to the exit as Andrew Miller had been waiting and warming for more than an inning. Miller then struck out Bird on four pitches to end the inning.

The usual starter, Garcia, stayed in for his third inning in the seventh and it was his first to set down three in a row. Ramirez and Encarnacion each flew out before Bruce struck out swinging to quickly end the inning.

After an easy out in the 7th, Miller stayed in for the ninth and struck out the right handed Frazier. After a long at bat, Chase Headley walked, but Miller recovered to strike out Hicks for the second out. Miller then walked Brett Gardner for his second of the inning and the Francona moved for his closer with one out to go in the eighth, two on and a four run lead. Of course, it was just more of the same for Aaron Judge, who struck out against Cody Allen to end the inning.

Dellin Betances came into the game for the eighth for New York and struck out Santana, Jackson and Perez to quickly set down the side and keep the game within four.

Allen came out for the ninth to finish the four out save. He retired Sanchez on a liner back to himself, then struck out Gregorius on a check swing. Castro hit a single to right to give the Yankees three hits on the night, but Allen struck out Bird to finish off the Tribe win.

On Deck: ALDS Game 2 – Corey Kluber will start for Cleveland and CC Sabathia for New York at 5:00 PM on MLB Network