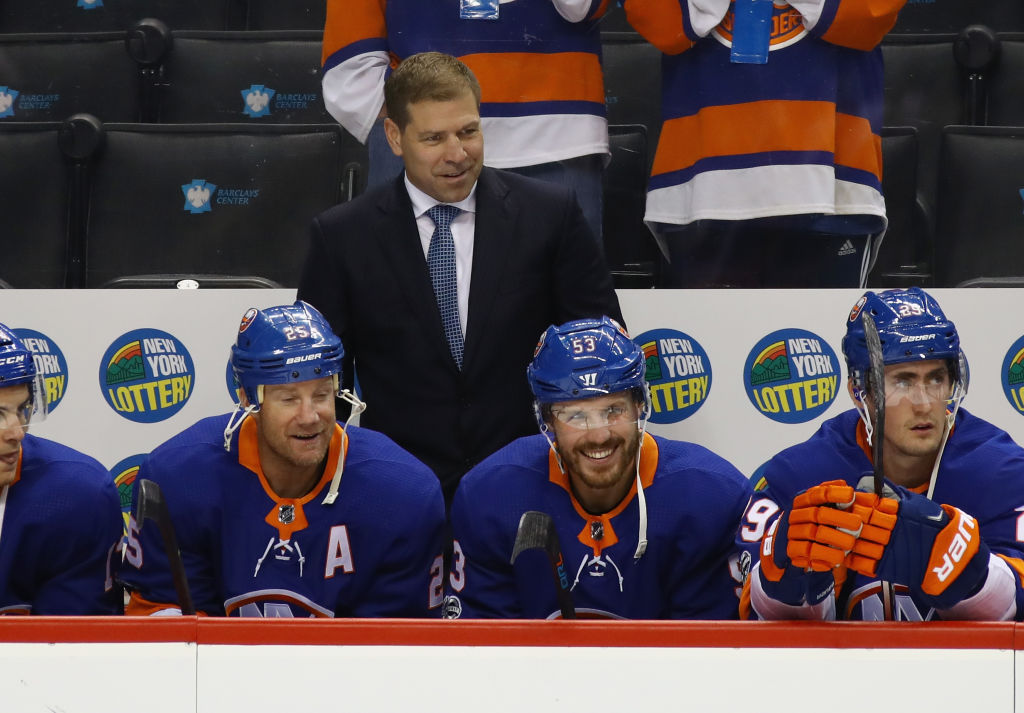 UPDATED: Well it looks like we have several answers already. Head coach Doug Weight will play Jason Chimera in lieu of rookie Josh Ho-Sang and Scott Mayfield will be the sixth defenseman, according to Newsday.

The news comes as a bit of a surprise after Josh Ho-Sang dazzled during the preseason and was coming off an impressive 21-game stint last year. Mayfield winning out on defense also is somewhat surprising considering where Ryan Pulock sits in the prospect depth chart.

As the Newsday article noted, it appears that Weight is going with experience in certain positions.

ORIGINAL POST: The Islanders begin the 2017-18 season tomorrow night in Columbus with the hopes of getting off to a better start than last year. The Isles dropped three of their first five games to open last season and only won seven of their first 21 contests.

The roster has been set – the Islanders are carrying 13 forwards and eight defenseman – and Doug Weight and his staff is putting the finishing touches on the lineup for Friday. Still, there are some tough decisions and lingering questions that remain as the season begins.

Here are three questions as the Islanders prepare for opening night:

Who is the Islanders sixth defenseman?

With eight defenseman on the roster there will be a few guys who will be watching Friday’s season opener from the press box. Just who those players are remains unknown.

Nick Leddy, Johnny Boychuk, Calvin de Haan, Thomas Hickey and (most likely) Dennis Seidenberg will be in the opening night lineup. After that it comes down to rookie Ryan Pulock, Adem Pelech or Scott Mayfield to round out the defense. Islanders fans have been clamoring to see Pulock consistently crack the team’s lineup for sometime now, but that isn’t a given.

Pulock’s hard slap shot is an appealing weapon to yield on the point, but his play in his own end has been spotty at times during the preseason. Head coach Doug Weight has also liked what he’s seen out of all his defensemen, which makes the decision even tougher for Friday.

The organization certainly thinks enough of Adam Pelech where it wouldn’t be a huge surprise if he were in the lineup against Columbus. And Scott Mayfield may not be the flashiest player on the ice, but he can get the job done as a sixth defenseman.

This is somewhat of an easier question to answer, but still a question nonetheless until Weight announces his lineup tomorrow. It’s safe to assume that John Tavares will center a line with Anders Lee on his left side and Jordan Eberle on his right.

The Islanders lines looked like this during Tuesday’s practice

And on Wednesday Josh Ho-Sang moved into the second line spot held by Josh Bailey, who was with his wife. That according to Arthur Staple, who reported on Thursday that everyone was accounted for at practice before the team left for Columbus.

It appears it could come down to Chimera or Ho-Sang sitting out game 1 of the season by the looks of the practice lines. It would be hard to imagine Mathew Barzal not playing after the preseason he had and Weight already said Beauvillier would play tomorrow night.

The Islanders won’t be juggling three goaltenders this season, but they will have a 1 and 1A goaltending situation this season. The big question early on is who will start the first game.

While not the most important question, since both goaltenders will get work with the Islanders playing Friday and Saturday night, it will be interesting to see who gets the start. Both goaltenders had strong preseasons, but one would assume Halak would get the bulk of the workload after the way he played at the end of the season.