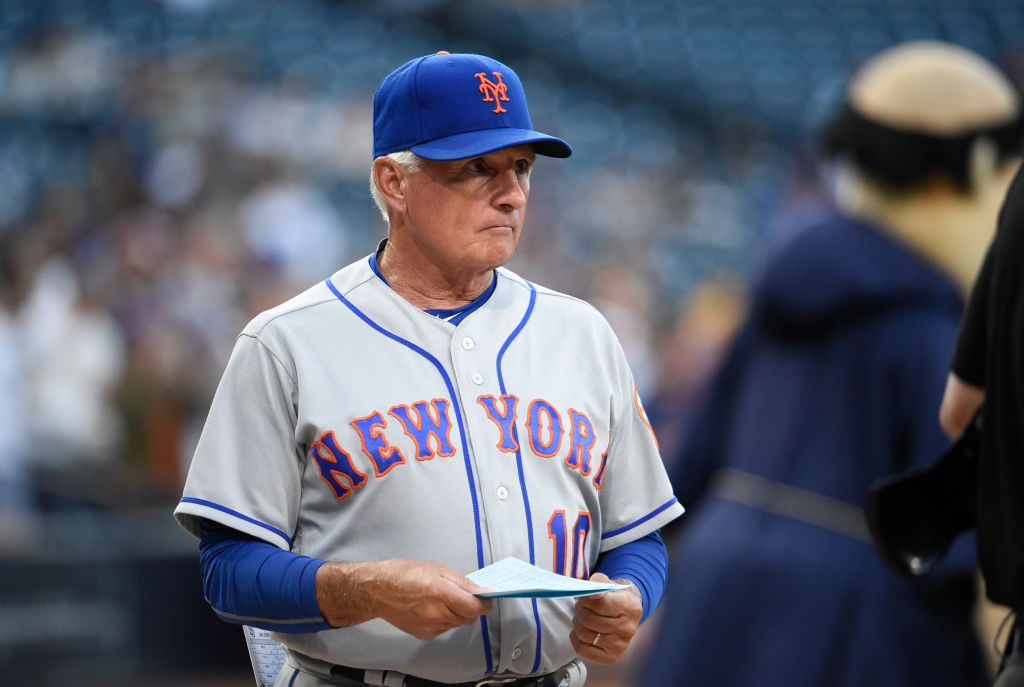 Now that the 2017 season is over, its time to take a look back at the year that was for the New York Mets. It was a disappointing season for the Mets, who began the year with World Series hopes and ended it as a 90 loss team, so it is worth looking back to see what went wrong. Over the next several days we will look at the offense, starting pitching, bullpen, and coaching staff to see where the Mets can improve. Today we’ll take a look at the Mets’ coaching staff.

SAN DIEGO, CA – JULY 24: Terry Collins #10 of the New York Mets comes onto the field before a baseball game against the San Diego Padres at PETCO Park on July 24, 2017 in San Diego, California. (Photo by Denis Poroy/Getty Images)

The coaching staff was largely the same as it was in 2016, with the exception of catching instructor Glenn Sherlock replacing Tim Teufel as third base coach. The group didn’t have nearly as much success this season, and after the Mets’ World Series dreams turned into a 90 loss season the team started making changes. Long time manager Terry Collins resigned and accepted a front office position while pitching coach Dan Warthen was let go. The Mets made other changes as well, but as we examine those let’s look back at the year of the staff.

Terry Collins: Collins became the longest tenured manager in franchise history this season, and it would prove to be his last go round as Mets’ skipper. The fans began to grow frustrated with Collins as the losses mounted, questioning his lineup choices and bullpen usage in particular. The front office also made life difficult for Collins, handing him impossible mandates (such as not discussing injuries with the media for a while) and leaving him with a fractured clubhouse for most of the season. Collins did the best he could with what he had, but after seven years it is probably a good idea for the Mets to go with a new voice in the dugout.

Dan Warthen: After working wonders with the pitching staff for the past several years, Dan Warthen’s magic touch ran out this season. The Mets’ pitchers were horrendous, pitching to a 5.01 ERA, the third worst in the major leagues and easily the worst team ERA in Warthen’s tenure. The team’s young pitchers, particularly Noah Syndergaard and Jacob deGrom, stuck up for Warthen but the front office felt that a change was needed. Aside from the manager’s seat, this hire will be the most important one the Mets make this winter.

Kevin Long: Hitting coach Kevin Long has been one of GM Sandy Alderson’s better hires over the past few years, and he will be retained for next season. Long has helped reinvent several of the Mets’ best hitters, and his best work this season was with Michael Conforto. After a lost 2016 season, Conforto faced a make or break 2017 campaign, and he was able to succeed thanks to Long’s tutelage (among other things). Long will get an interview for the manager’s job this season and could be a future skipper somewhere else if he doesn’t land the gig here.

The Rest: Bench coach Dick Scott, who hasn’t been too noticeable in two years as the replacement of Bob Geren, likely won’t be retained. Scott was thought to be a potential successor to Collins at one point, but his work apparently soured the front office on his chances . . . Sherlock wasn’t great as a third base coach but did solid work with both Travis d’Arnaud and Rene Rivera, earning him another year on the big league coaching staff . . . Bullpen coach Ricky Bones and first base coach Tom Goodwin are free to seek positions with other clubs, so the odds of them being back on the big league coaching staff are low . . . Assistant hitting coach Pat Roessler, who came over with Long in 2015, has already been retained for 2018 . . . Much maligned trainer Ray Ramirez has been let go as the organization is planning to overhaul its medical department . . . One man who isn’t in jeopardy, however, is controversial strength and conditioning chief Mike Barwis. Barwis, who helps supervise players’ offseason training regiments, is regarded as a key piece of the team’s success going forward by Alderson.