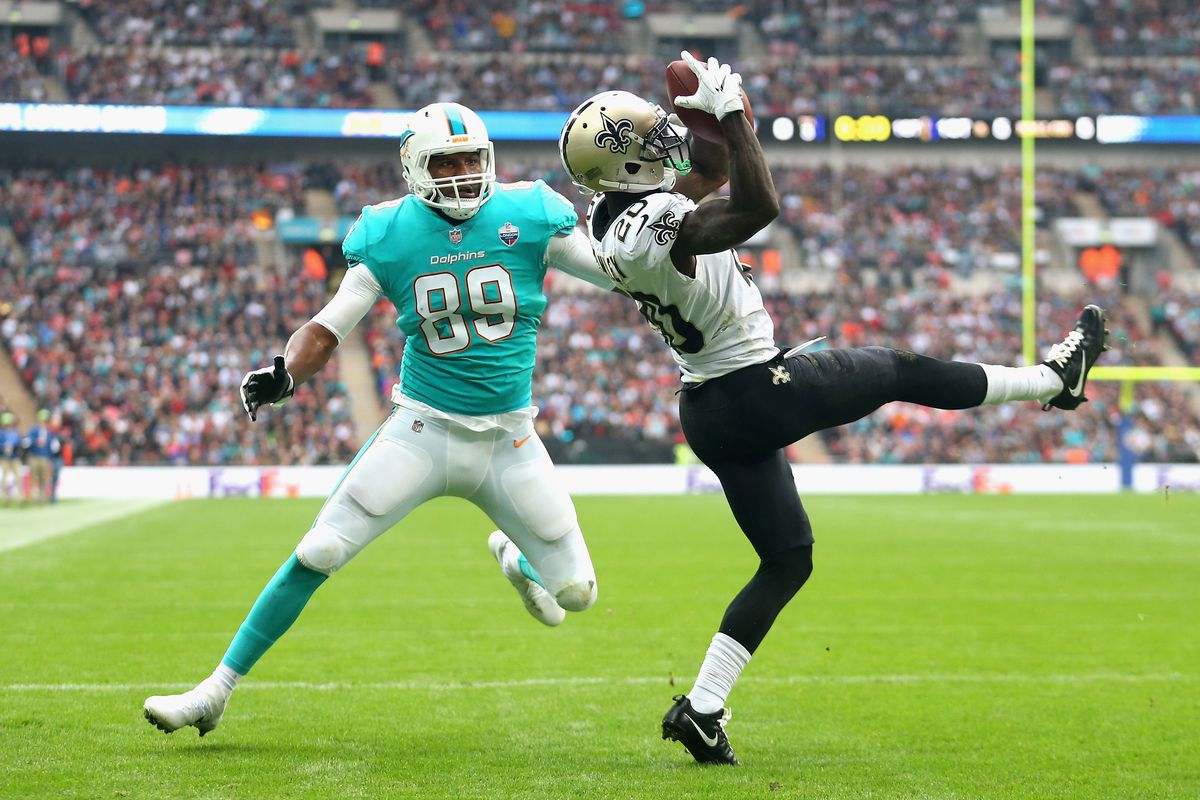 For the 2nd week in a row the Saints defense played a mediocre offense, and for the 2nd week in a row they dominated them defensively. This sounds like a backhanded compliment, but it isn’t, in fact its a real sign of growth. For the last several years the Saints defense has been a unit that makes EVERY team look like the greatest show on turf. The Saints are the youngest defense in the league, and one of the youngest in years, and for the first two weeks they looked the part making a lot of ‘rookie’ mistakes with first and second year players. However, the Panthers and Dolphins came at just the right time as the Saints needed some opponents with less than great quarterbacks that would allow their young defense to gel, and start to build some of the confidence they will need to continue to improve. The level of competition as far as offensive weapons this week was greater than last, and the grades will reflect that.

The defensive line led by underappreciated stud Cameron Jordan had another solid game. They weren’t able to put together a dominating performance, and the pass rush was still hit or miss, but we saw improvement on the interior in this game. Sheldon Rankins showed some signs of life and so did Onyemata, but the player who is really starting to have an impact is free agent signing Alex Okafor. Okafor hasn’t been a dominant pass rusher by any means, but he’s been effective. What hasn’t been talked about enough is how solid he has been in the run game. It was the Saints run defense that set them up for success in this game (that and their coverage), and this has mostly been true throughout the first 4 weeks minus that 1st quarter against the Panthers where they fell for a lot of misdirection plays (not really on the defensive line). In fact, the Saints defensive line has been outright dominant against the run with the vast majority of opponents production on the ground coming out to edges on plays where either the Saints linebackers misdiagnosed the play, or just failed to make it. I still believe they need another 1st round level talent to play opposite Jordan to really have a high quality defensive line, but this unit deserves credit for stepping up in a big way so far this year.

The Saints linebacker unit did a good job of keeping the play in front of them and making sure they didn’t let anything get by. Their primary job was to apply pressure through a varied blitz package, and to make sure that the Dolphins star running back Jay Ajayi had a terrible return home (he’s from the UK). Klein and company were solid in coverage, but their primary task was to provide pressure and stay sound to prevent any big runs and to keep the Dolphins from picking up any momentum, they did that. The only downside was the injury to rookie linebacker Alex Anzalone. He’s not a huge loss by production, but he’s a developing young player and was the only guy in the Saints linebacking corp capable of making ‘athletic’ plays sideline to sideline. The front 7 isn’t the swiftest of foot in the first place and they just got another step slower.

The Saints played as many as 4 safeties on the field at one time and it worked like a charm. Not only did the saints safeties do a great job of providing help in coverage to erase down field opportunities, but they also provided coverage and run support in the first 15 yards to give the defensive line and the linebackers time to make plays. Rafael Bush came up with a sack on a beautiful blitz, Kenny Vacarro and Vonn Bell were back to the roles they are most comfortable in, and Marcus Williams made it so that Jay Cutler wasn’t willing to risk any throws down the field. A steady, and highly effective performance from the team’s deepest unit.

I don’t give these out a lot, and I try to make an outstanding grade mean something, but the Saints corners truly deserved it for their performance in London. Not only did they completely shut down Devante Parker, Kenny Stills, and Jarvis Landry (which is a very solid receiving corp), but they did so by absolutely smothering them. I have been pleasantly surprised by just how poised and confident Marshon Lattimore already looks as a rookie. There were several plays he basically ran the route for Parker and entirely erased any ability for the QB to throw to his man. The bigger surprise though, and the reason this grade was given a plus is Ken Crawley. In back to back weeks Crawley has been called upon to serve as a starting corner for the Saints and in back to back weeks he has excelled. Crawley was physical, almost constantly in phase, and single handedly ruined the Dolphins only scoring opportunity of the day by perfectly playing a fade in the back of the end zone to Julius Thomas and intercepting the pass. Crawley showed signs of being able to develop into a good corner last year, and now he is showing signs that he’s ready to take the next step of his evolution. Lattimore you expect to be exceptional, Crawley is icing on the cake and if he can maintain this level of play he’s going to make the Saints have some very tough decisions to make come week 8…and that’s a good thing.

Will Lutz missed a very makeable field goal, but made his two others. he seems to be struggling with some accuracy issues early in the year (although this one may have been affected by the Soccer pitch, I’m not sure). He’s still been pretty reliable and the team seems to have a lot of confidence in him though. Thomas Morestead was fantastic as always, and the Saints return game continues to be a solid asset. They have yet to break a big return, but Ginn consistently gets positive yardage, and those ‘hidden yards’ really do matter. The coverage was also very good which has been a welcome and pleasant change from previous years.

Dennis Allen and his staff had their players prepared and ready to play. They were aggresive, poised, and had a great game plan. The coaches did a very good job of isolating what the Dolphins wanted to do, and neutralizing it by focusing on killing the run game. Their coverages were designed to mitigate any deep plays and to keep the ball in front of them, and because the coverage help up so well they were able to effectively neuter the opposition. You always get props when you pitch a shutout, especially when the team earns it (the one vs Tampa in 2012 wasn’t nearly as impressive).