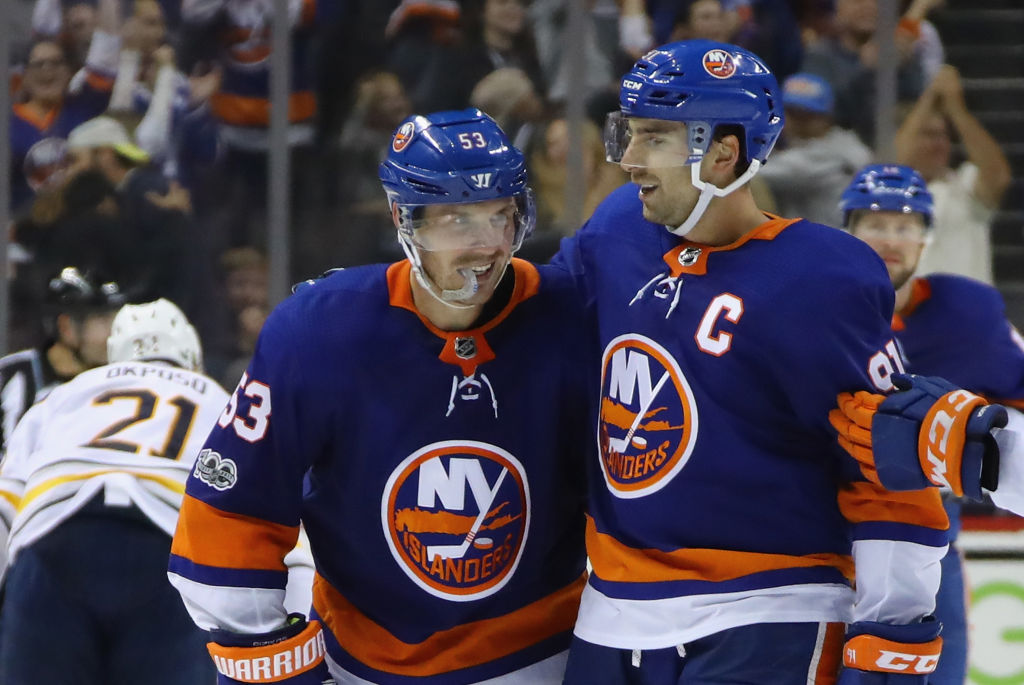 NEW YORK – The Islanders found their rhythm on Saturday night after a poor performance the night before. The Islanders scored 1:50 into the game and recorded five goals, with John Tavares scoring twice in a 6-3 win.

Tavares opened the scoring with his first goal of the night early in the first period. It was a span of 1:47 in the second period. Tavares scored his second of night at 5:13 followed by Casey Cizikas less than a minute later and finally Josh Bailey scored at the seven-minute mark.

Evander Kane scored twice while the Sabres were shorthanded before the second period came to a close to bring Buffalo within two.

Anthony Beauvillier scored 5:39 into the third period and Case Cizikas scored on an empty net in the final minute of the game. Jack Eichel scored Buffalo’s third goal of the night in the third.

The Islanders host the St. Louis Blues on Monday.

1. It should come as no surprise to anyone that it was John Tavares who scored the Islanders’ first goal of the night and season 1:50 into the game. Tavares will be a huge focal point this season, not only for his valuable play on the ice, but for the situation off the ice with his contract.  So when the puck went found the back of the net 1:50 into the game, it only made sense that it came off the stick of Tavares.

2. The call by MSG-Plus’ Brendan Burke for the Islanders first goal went something like this: “Here’s Jordan Eberle, has Tavares and Lee in transition. Across, Tavares scores!” Those two names in a goal call from Burke might be something we hear a lot of this season. Tavares and Eberle seem to be meshing quite well with each other and generated several scoring opportunities throughout the night.

“He plays a similar style as me and I think the speed that he plays with I’m comfortable with,” Eberle said about playing with Tavares. “He sees the ice and thinks the game. I like to think of myself as a cerebral player, so I think it’s only going to get better the more we play together.”

If Saturday is just an appetizer of whats to come, then the Isles could find themselves with one heck of a top line.

3. The Islanders surrendered three goals, but Jaroslav Halak had another good night in net. The Islanders netminder made 26 saves on 29 shots against the Sabres, which included a handful of big saves at the end of the game. Halak played well in the preseason, during his relief stint on Friday night in Columbus and kept that going against Buffalo.

It’s no secret the Islanders defense is a big question mark this season, so for the Islanders to succeed this year they will need the best out of both goaltenders. Halak has held up his end of the bargain so far. It now raises an interesting question for Weight, who will now have to decide between a hot Halak or give Greiss another go on Monday.

4.  One of Griess’ best saves came on former Islander Kyle Okposo late in the third period. Okposo was about 20 feet away from the net when waited and then fired a wrist shot toward the net. Halak was able to flash the glove and keep the puck out of the net.

“I just know he got the puck in the slot,” Halak said.  “Our D tried to block the shot. I just tried to take the angle away. It kind of hit me in the glove, so I’ll take that all night.”

5. While there was a lot of good for the Islanders, there were some things that need to be cleaned up. The Islanders power play surrendered two shorthanded goals in the second period and the power play went 0-for-3 on the night. Still, even with all of that it was a much better performance from the blue and orange.

6. Brock Nelson had some noticeable gaffs throughout the night. Weight liked what he saw from the Islanders forward, but Nelson’s performance’s need to be better with the team expecting him to take another step forward this year.

7. Congratulations to Nick Leddy on playing his 500th NHL game on Saturday night. He saw 19:57 of ice time against Buffalo and recorded an assist on Anthony Beauvillier’s goal.

8. Beauvillier, Ho-Sang, Barzal and the rest had another good showing for the Islanders. The third period goal was Beauvillier’s firs goal of the season and 10th of his career. Ho-Sang recorded his first point of the season when he set up Josh Bailey in the second period and Barzal was noticeable as well. There was a bad turnover by Ho-Sang that forced Halak to have to cover for his mistake, but with only 23 games, including Saturday, under his belt those mistakes will happen.

Defensively, Scott Mayfield and Adam Pelech did their job and helped the Islanders blue line hold off Buffalo.

9. One thing the Islanders really wanted to do after Friday night’s debacle was give their goaltenders some run support and better performance in front of them. On paper it was not a good night for Thomas Greiss, but the goalie did all that he could to keep the Islanders in the game. Casey Cizikas used the phrase “hung out to dry” when talking about Greiss the night before and how they didn’t want to do the same thing to Halak on Saturday night.

“Tonight I thought we did a great job of moving the  puck up, moving it into their zone and kind of keeping them to the outside,” Cizikas said.

11. John Tavares’ contract situation is going to be a story all season and it came before Saturday’s game when Kyle Okposo was asked about it. The former Islander had a little chuckle when he was asked the question. Okposo said he wasn’t “grilling him” too much about the contract situation, but was making sure he was dealing with it ok when they talk.

“We’ve just talked, I want to make sure he’s doing OK with it mentally,” Okposo said.  “Give him a little bit of advice becauseIt’s a tough thing when you’re going through it. He’s doing OK and he’s focused on winning games and being the best player that he can for the Islanders.”