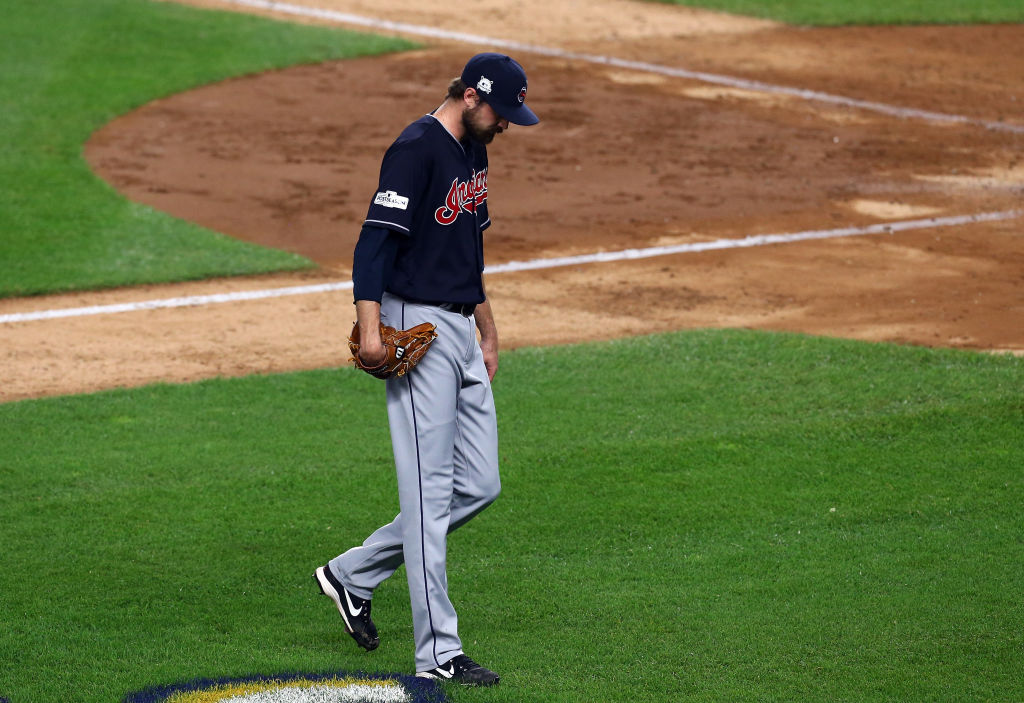 Game three of the ALDS was the best pitched game so far this post-season with both starters lasting through the fifth and neither giving up a run. Here’s how it went down:

Masahiro Tanaka established a rhythym and a strategy early in this game that he would use throughout the whole game. Focusing on the splitter low, he struck out Francisco Lindor and Jose Ramirez in a 1-2-3 first. An oddity in the post-season so far, Carlos Carrasco would match him in the bottom half with two k’s in a perfect inning.

Jay Bruce struck out to start the second, then Carlos Santana came through with the first hit of the game. The rally wouldn’t last long, however, as Austin Jackson grounded into a double play to end the inning.

Carrasco would also allow his first baserunner in the second inning, hitting Greg Bird on the back foot with a pitch after two were out. Despite this, he struck out Todd Frazier to end the inning with his fourth K in two innings.

Although he was more patient than most of the Indians line-up, Michael Brantley grounded out to start the third. After Roberto Perez quickly struck out, Giovanny Urshela grounded out to end the frame.

Dealing with a small strike zone, Carrasco walked his first batter to start the third as Jacoby Ellsbury reached first. Two pitches later, he’d be taken off the bases as Aaron Hicks grounded into a double play. Brett Gardner flew out to end the inning.

After a quick ground out for Lindor, Jason Kipnis had the Indians first solid hit of the game, a line drive that glanced off Aaron Judge‘s arm in right for a triple. Despite the great scoring chance, Ramirez struck out for the second time and the sixth in 11 at bats in the ALDS. Tanaka struck out Bruce to end the inning with Kipnis stranded on third.

Just as the Indians MVP candidate struggled through the first three games of the ALDS, Judge continued his woes in the fourth, striking out for the second time in the game and seventh time in nine at bats in the series. Although Didi Gregorius did reach with the Yankees first hit, Carrasco K’d Starlin Castro to end the inning with the shut out intact.

Continuing to be one of the only players to have good at bats against Tanaka, Santana walked to start the fifth. Much like every other scoring chance in the game to this point, this was short lived as Michael Brantley grounded into a double play to end the inning.

Carrasco continued his shut out into the fifth with another 1-2-3 inning. This time he struck out Greg Bird for his 7th in the game, just surpassing Tanaka who had six through the first five scoreless innings.

One of the more unlikely Indians to get a hit started off the sixth with a single as Roberto Perez reached against Tanaka. Urshela then had a nice swing, but flew out to right, keeping Perez on first. Lindor went along with that strategy as well, crushing one to the short wall in right field, but Judge robbed Lindor of a home run just beyond the fence. The final out would be much less exciting as Kipnis flew out to left center to end the inning.

There may have been a chance for an even more impressive defensive play for the Indians in the bottom half as Hicks grounded one to Urshela at third, but he was unable to make the barehanded grab and throw. With Hicks on first, the most predictable event in the game happened as Brett Gardner hit one right up the middle that allowed Lindor to step on second and throw to first for the double play.

For the first time all night, things then began to unravel for Carrasco. He walked Judge, then gave up just the third hit of the game to Gary Sanchez. After a walk to Gregorius, Terry Francona was forced to go the bullpen and super lefty Andrew Miller. Against Castro, Miller got a fly to short left to end the inning and keep the game scoreless.

Ramirez opened the seventh with a lengthy at bat against Tanaka, but ultimately grounded out to short. Tanaka didn’t take nearly as long to finish the rest of the inning, striking out Bruce and getting Santana to pop up the first pitch to center.

Miller would stay in the game for a second inning, but the results were very un-Miller like. After a 1-1 count, Bird took a fastball down the middle and blasted it deep into the right field stands for the first run of the game. While Miller would get the next out, Tyler Olson would come in to finish the inning with New York now having the lead. Olson would strike out the pinch hitter, Chase Headley as well as Hicks to end the inning without further damage.

It appeared the Indians had something going in the top of the eighth after Brantley walked and the managerial wheels started moving. Francona pinch hit Lonnie Chisenhall for Roberto Perez, forcing Joe Girardi to go to his closer, Aroldis Chapman. With the lefty in, Francona went to Yan Gomes at the plate and brought in Greg Allen to pinch run at first. This time, the Yankees came on top as Gomes and Urshela struck out to end the inning with Allen still on first.

With Allen in the game at DH, the Indians were stuck with Kipnis in centerfield and he made his first mistake of the series against the first batter in the bottom of the eighth. Olson had stayed in the game and got a weak pop up from Gardner that Kipnis misplayed into a double. This was the end for Olson as Francona then went to Joe Smith with a runner on second and no one out.

Smith would then have one of his best appearances on the season for the Indians as he struck out two, intentionally walked Gregorius and got Castro to ground into a fielder’s choice to Urshela who tagged third for the final out of the inning.

Chapman came back out to finish the game in the ninth and quickly blew away Lindor with high fastballs for the first out. Kipnis looked similarly behind, but he hit one through the middle for a single. Ramirez battled as well, ultimately hitting a line shot between second and third that Frazier snared, but misplayed for an infield single.

For the second time in the game, however, Bruce struck out with Kipnis in scoring position to give the Indians just one out to tie the game. Santana then worked Chapman to a full count, but ultimately flew out to center to end the game and give the Yankees one more game.

On Deck: Luis Severino is scheduled to pitch game four in New York against Cleveland with either Josh Tomlin, Trevor Bauer or Danny Salazar going for the Tribe. The game is scheduled for 7:40 PM.