Could Frank Ntilikina and Ron Baker Give Knicks A Defensive Boost? 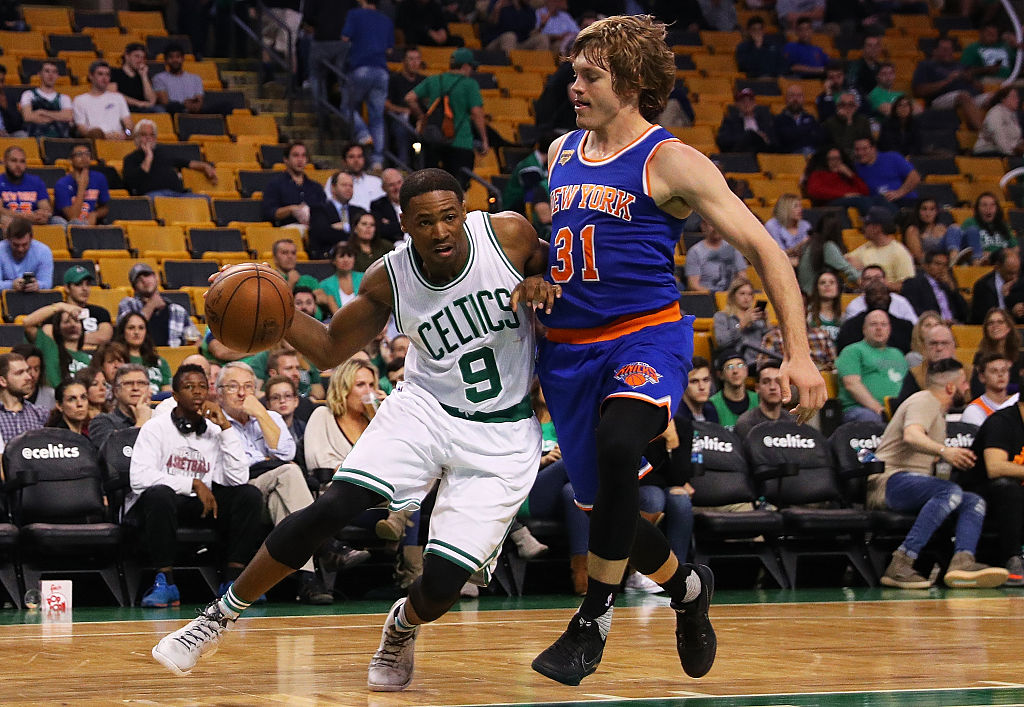 Could Frank Ntilikina and Ron Baker Give Knicks A Defensive Boost?

As the Knicks fell to a preseason record of 0-3 with a blowout 117-83 defeat to the Nets, it’s clear this team is still very raw and needs more time to grow on the defensive end.

There are plenty of ways to pick apart New York’s defensive woes. Through three games, this new-look group has allowed its opponents to play uptempo basketball, and in turn, run (and gun) all over them. There’s been little to no pressure put up around the perimeter. When the guards fail to help shoulder the defensive burden, the team’s front-court players are left surprised around the rim as opposing players drive through the lane. The players fail to support one another, but a strong argument can be made that any attempt to begin slowing down an opponent’s offense comes from ball pressure and a swarming effort from the get-go. That puts recent blame on the team’s backcourt. They need to set the tone.

Such a suggestion is something Kristaps Porzingis picked up on following the loss to Brooklyn. “In the end, you have to have pride and play one on one defense and guys know that I’m going to be back there protecting the rim as much as I can but we have to stop them from the perimeter and have pride in one on one defense,” he explained per ESPN’s Ian Begley.

It’s also Jeff Hornacek’s responsibility to fine tune things and put forth balanced lineups. There were some questionable choices made against the Nets that suggested defense may not have been an overwhelming priority. That being said, some changes are needed. With Frank Ntilikina expected to return and Ron Baker set to make his preseason debut against the Rockets on Monday, it’d certainly be interesting to see the defensive-minded duo share the court together.

Baker’s scrappy play quickly became recognizable amid the Knicks’ struggles last year. He’s a solid man-to-man defender and makes smart decisions when adjustments are needed. As a 6’3 and 220 pound combo guard, he has some underrated physicality as well. As for Frank Ntilikina, it’s still early and he has plenty to learn as he adjusts to the NBA. Nevertheless, he has tremendous length and quickness. He too is known for his defense, and alongside Baker, the pair could put forth a defensive wall and limit penetration.

Any attempt to set the tone defensively begins with strong guard play, and that’s why Baker and Ntilikina could provide a steady one-two punch. Such a pairing is worth rolling the dice on, despite the inexperience between the two. What’s more, Coach Jeff Hornacek will need to pair them up with shooters, a la Doug McDermott or Tim Hardaway Jr. at the three and Porzingis at the four. If Porzingis needs defensive support down low, the team could slot Kyle O’Quinn or Joakim Noah at the five. The team has plenty of options at the center position, but as far as 1-4 goes, the aforementioned players would provide the Knicks with explosiveness on both ends of the floor.

Through three preseason games, it’s clear what New York has been lacking. As they attempt to shore up some evident holes, pairing up Baker and Ntilikina in the backcourt would be an interesting experiment.