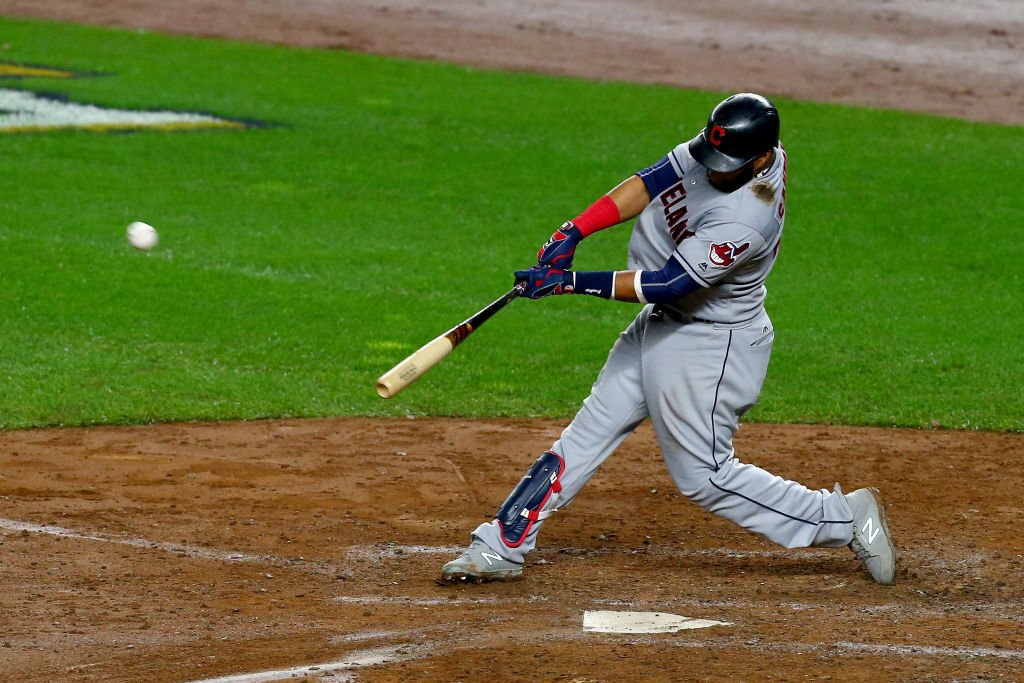 Before game four in this half of the ALDS, the Astros knocked off the Red Sox to advance to the ALCS in the other half. The Indians were looking to do the same in this match as the Yankees were just trying to stay alive. This is how it went down:

Making his first start since his extremely rough Wild Card outing, Luis Severino looked much better the second time around. He made it all the way through the first inning this time, striking out Jason Kipnis between fly outs for Francisco Lindor and Jose Ramirez.

Trevor Bauer also made his second start of the post-season, although his first game had much better results. He would also quickly work through the first, striking out Brett Gardner and Aaron Judge to start the game. Although he walked Didi Gregorius, a routine ground out off the bat of Gary Sanchez would end the inning.

The Indians would match the Yankees with their first baserunner of the game in the top of two as Jay Bruce lead off the inning with a single. Carlos Santana then lined out to second for a near double play. While Bruce remained on first, two strike outs against Michael Brantley and Lonnie Chisenhall ended the inning for Severino.

They say you can see anything in the play-offs and something truly rare happened to start the second, a Giovanny Urshela error. With a one out runner on, however, Bauer struck out Chase Headley before another surprising misplay where Roberto Perez allowed a passed ball. With two down, Todd Frazier broke open the scoring with a double that hit the line in left and brought home Starlin Castro with an unearned run. Bauer continued to battle against Aaron Hicks and appeared to have him struck out on a check swing, but instead the outfielder ripped a fast ball down the middle to right center to score Frazier from second with the Yankees second run.

Continuing on, Gardner came through with a seeing eye single up the middle to move runners to the corners. With Judge up, he would steal second on a ball in the dirt. In another lengthy at bat, Judge finally reached base with a hit for the first time in the series as he hit the hardest ball of the inning off the left field wall. The double scored two more runs and removed Bauer from the game after just 2.2 innings.

Joe Smith would relieve Bauer as he could warm up more quickly than the Indians starters that had moved to the bullpen and he got his first man to foul out to Santana at first to strand Judge at second. In an inning that could have been scoreless or one run if any number had things had been just slightly different, the Yankees scored four thanks to four straight hits after the error extended the inning.

Severino struck out his third in a row to start the third, getting Perez swinging. He would continue pounding the zone as Urshela grounded out and Lindor flew out to end the inning.

With enough time to warm between innings, the Indians went to their first extra starter, Mike Clevinger, to start the third. He didn’t start much better than Bauer had left, walking Greg Bird on a full count, then giving up a double to Castro, but he finally retired his first batter by striking out Headley.

Clevinger walked his second to load the bases, bringing the infield in for Cleveland with Hicks up. He would bounce one to Santana at first that Santana went home with for the second out of the inning. The inning appeared to be over when Gardner hit a routine ground ball to third, but Urshela committed his second error of the night. While it wasn’t his fault, this was the end for Clevinger (Urshela, who had made two pitchers look bad, stayed in the game) and Danny Salazar got his first ALDS action.

The regular starter struck out Judge on fastballs to end the inning, hitting 100 MPH on the stadium gun (98 in real life according to statcast).

Kipnis continued to struggle as he went down swinging against Severino for the second time to start the fourth. Severino then had Ramirez completely mishit one for a pop up to center. With two down, Bruce worked a walk after a full count, then Santana finally put the Indians on the board for the first time in two games with a two run home run to center. Brantley then lined out to center to end the inning, but the Indians had at least got the game to back within three.

Salazar had a chance for his first clean inning in the fourth and he immediately walked Gregorius to put that thought away. Sanchez struck out, however, then Bird flew out for the second out. With a chance to end the inning, Salazar walked Castro. The Yankees had another potential damaging situation brewing, but Salazar struck out Headley looking on an inside change to end the inning.

Severino continued in the fifth, striking out Chisenhall to start the inning. The offensive hero from the 2017 post-season, Roberto Perez, took advantage of the short porch in right with a solo home run to bring the game within two for the first time since the second. The rally wouldn’t be extended, however, as Urshela struck out and Lindor flew out to end the inning.

Continuing on with the Indians defensive woes, Danny Salazar turned an easy out into a double by throwing a ball past Santana and down the right field line to start the fifth. While he retired Hicks on a ground ball, Frazier moved to third on the play and Terry Francona went to Tyler Olson for the third consecutive game.

Olson was only on to face one batter and he would get Gardner out, but it came at the cost of another unearned run as Frazier came home on the fly ball caught by Kipnis in center. With the bases now cleared and two outs, Francona would go with his sixth pitcher of the night and the third of the inning in Bryan Shaw. Shaw struck out Judge swinging to end the inning.

Severino locked back in for the sixth, making Kipnis look silly on a ground out before striking out Ramirez on a perfect pitch low and outside. Bruce popped out early in the count to finish the inning without a base runner.

Shaw stayed on for the sixth after finishing the fifth and eliminated Gregorius on a routine grounder to Urshela. Things wouldn’t continue on for long, however, as Sanchez took Shaw deep to right, extended the Yankee lead back to four. Bird added a floating single to center to follow, but Shaw was able to get the next two batters in order, largely thanks to a nice running catch from Lindor, to end the inning.

Santana was retired quickly to start the seventh, but Brantley finally came through after with a single through the right side for his first hit of the series. This momentary set back didn’t bother Severino at all as he struck out Chisenhall for the third time and had Perez roll over one to short to end the inning.

While Severino made it through seven fairly easily, the Indians went to their seventh reliever of the night in Cody Allen. The Indians closer struck out Frazier to start, but was hurt when Santana allowed the Indians fourth error of the night. Hicks lined a ball off Santana’s wrist that went into right field, allowing Hicks to move to second on the play. Hicks went to third on a Gardner single to right and Gardner advanced to second when Bruce made a poor throw back to the infield. Allen managed to pitch around the errors and otherwise poor defense with a strike out of Judge and a pop out to short for Gregorius.

Dellin Betances came in for Severino to start the eighth and immediately walked two and was removed from the game. With a runner in scoring position for the first time in the game, Tommy Kahnle struck out Kipnis looking and popped up Ramirez to right. Bruce then struck out to end the Indians first real scoring opportunity of the night.

Josh Tomlin, who was originally scheduled to start this game, came in to pitch the ninth and set the Yankees down 1-2-3 starting with a strike out of Sanchez. Strangely, he was the fourth Indians starter to pitch in this game. Erik Gonzalez and Austin Jackson also came off the bench to join Yan Gomes who had pinch hit and walked earlier in the inning giving the Indians just Edwin Encarnacion (out with a sprained ankle), Greg Allen, Carlos Carrasco and projected game five starter, Corey Kluber, on the bench.

Kahnle stayed in for his second inning, looking to close out the game for the Yankees and force a game five. To start, he struck out Santana looking on a pitch inside (considerably inside the usual strike zone). Then, he struck out Brantley looking at a pitch that was significantly higher than a normal strike zone. Finally, he struck out Chisenhall swinging on a ball in the dirt to end the game.

On Deck: One way or another, the series will end on Wednesday when CC Sabathia takes on Corey Kluber in Cleveland for the second time