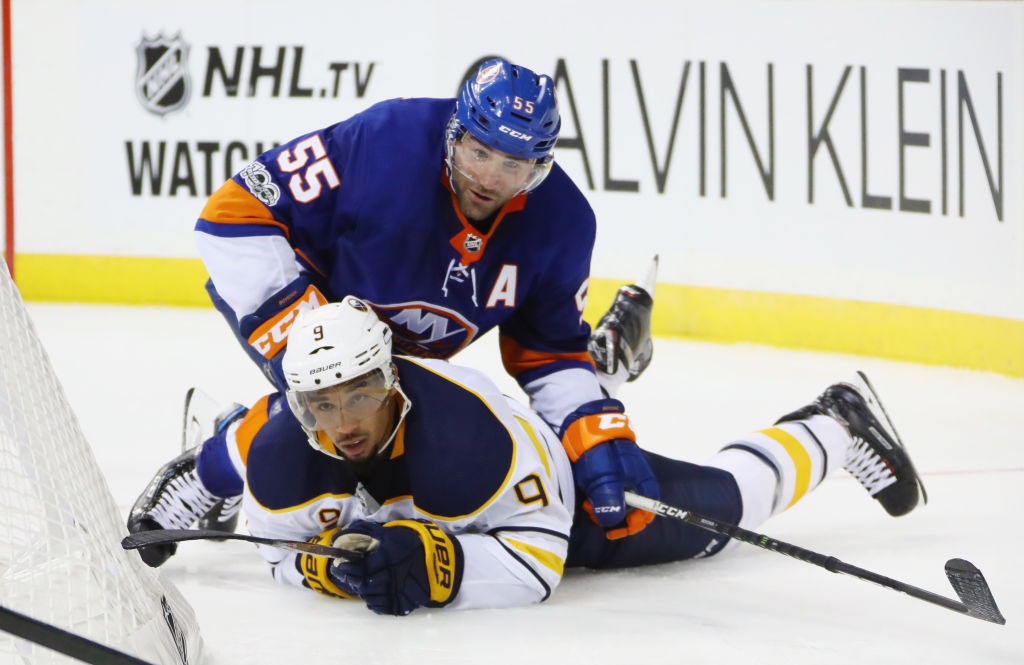 If there’s one thing the Sabres can take away from their first two games of the season, it’s that their mistakes will more than likely end up in the back of their net. Two nights after seeing two errors lead to two Canadiens goals, the Sabres again saw their mental and physical lapses lead to goals for the opposition.

Despite playing a decent road game the Sabres dropped a 6-3 decision to the Islanders in Brooklyn, and have no one to blame but themselves. The team again played well for long stretches, but a three goal outburst by the Islanders in only 1:47 blew the game open in the 2nd period.

The mistakes began less than two minutes into the game, when Sam Reinhart made an ill-advised pass back to the blue. Jordan Eberle was able to tip the pass by Marco Scandella and lead a two-on-one break with John Tavares. Matt Tennyson failed to take away the passing lane, and Robin Lehner was off angle and over aggressive, which more or less gave Tavares an empty net.

The Sabres were able to steady themselves and generate the majority of the chances in the rest of the 1st, but still headed to the intermission down a goal. The wheels fell off the bus just over five minutes into the second, when Nathan Beaulieu made a blind drop pass inside his own blue line. Tavares was on hand to scoop up the bad pass and easily deposit it behind Lehner for a 2-0 lead.

Less than a minute later, still on the power play, the Sabres gave up yet another shorthanded goal when Casey Cizikas beat Lehner clean with a slap shot from the left boards. Lehner’s night came to an early end soon after, as he was beaten again on a bad angle shot by Josh Bailey.

Evander Kane and Jack Eichel teamed up to get the Sabres on the board when Eichel picked off a pass by Jaro Halak below the goal line and fed Kane for a shorthanded empty net tap in. Kane single-handedly brought the Sabres within two with another shorthanded marker five minutes later. He was able to force a turnover in the New York zone, beat the Islanders to a rebound of the end boards, and tuck the puck behind Halak before he got to his post. The four shorthanded goals the two teams combined for tied an NHL record for most shorthanded goals in a single game.

The Sabres were unable to get the goal early in the third period that would’ve really put pressure on the Islanders; instead they gave up the goal that put the game out of reach. A simple D-to-D pass hopped over the stick of Rasmus Ristolainen, and the Sabres were never able to get the puck out. Anthony Beauvillier buried a rebound after Nathan Beaulieu lost track of him in front and was unable to tie up the Islanders forward.

Jack Eichel got off the mark for the season by jamming home a rebound with just under four minutes to go, and the Sabres had a few golden opportunities and get back within one. Kyle Okposo couldn’t beat Halak when he found himself alone in the slot on a late power play, and Sam Reinhart thought he had a goal when his shot got behind the goaltender, but video review determined the puck didn’t completely cross the goal line. An empty netter in the final seconds salted the game away for the Islanders.