Your Morning Dump... Where the Celtics can Still Surprise the League 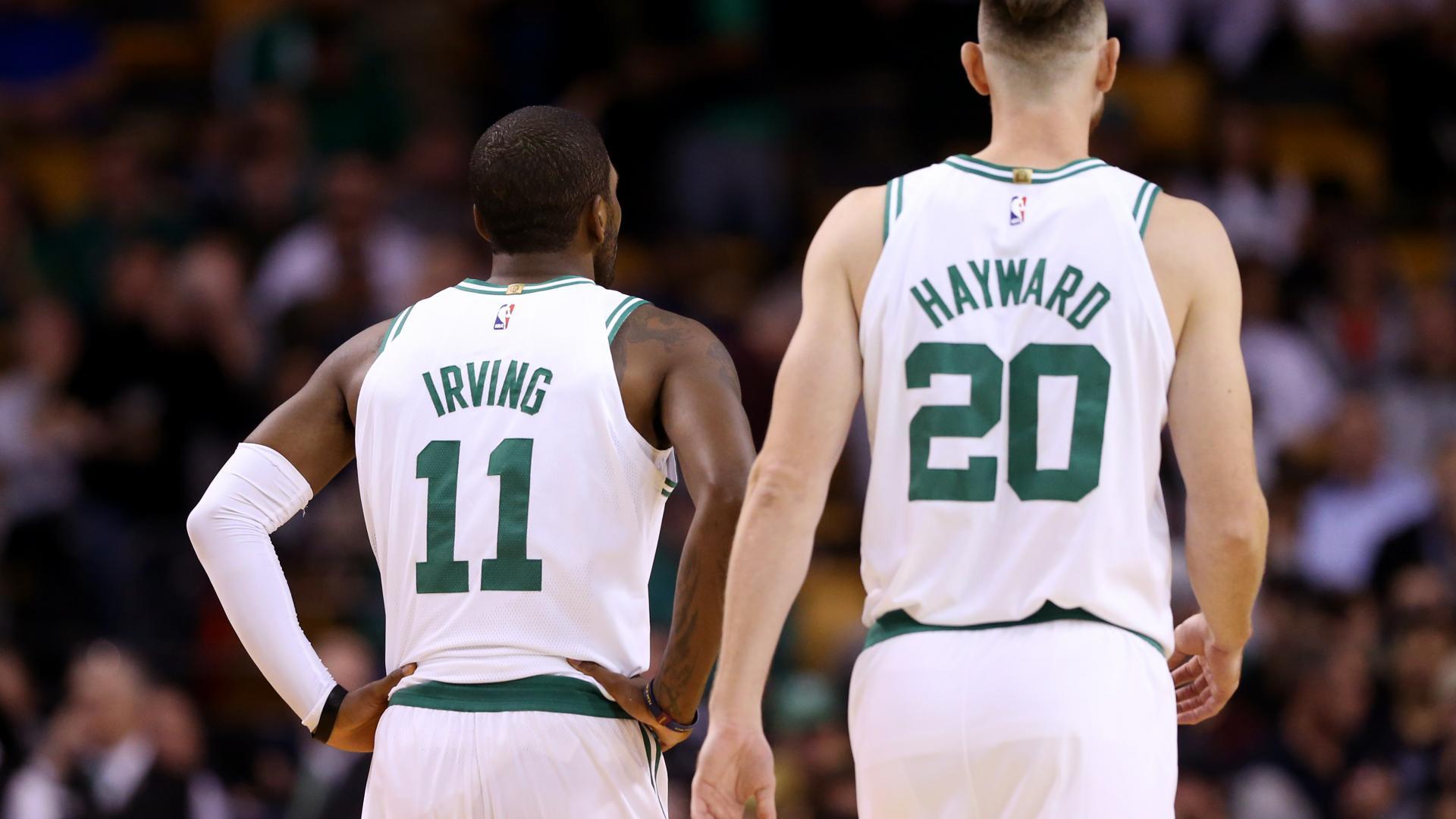 Your Morning Dump... Where the Celtics can Still Surprise the League

Rebounding will be an issue again, though Brad Stevens may deploy Aron Baynes as something of a utility glass-eating starter. Opponents shot just 33 percent from deep and 34 percent on corner 3s — the second-lowest marks in the league. How much of that was luck? We’ll see. Boston is stocked with huge wings; Gordon Hayward starts as the nominal shooting guard. If the team switches a ton, dial in on closeouts, and gang rebound, Boston will retain some of last season’s peskiness.

They are also relying on young players and unproven long-range shooters — a big deal for a team that jacked more triples than everyone but Houston and Cleveland. Opponents will dare Jaylen Brown, Marcus Morris, Terry Rozier, Jayson Tatum and svelte Marcus Smart, and Stevens will likely encourage them to let fly — at least from the corners, where Brown quietly drilled 44 percent.

But most first- and second-year players are net negatives. Chemistry takes time. Boston may be a little schizophrenic between and within games. There will be extended stretches when it clicks — when Kyrie Irving, Gordon Hayward and Al Horford ping the ball around, the cuts and handoffs are zippy, and open 3s find bottom.

There will be entire quarters that are clunky and clanky. If Boston disappoints, it will be tough for it to match salaries in any impact trade. The Celtics are saving their powder for You-Know-Who anyway.

Zach Lowe released his annual preseason column where he ranks all NBA teams into tiers. Understandably, the Warriors are in a class by themselves, but Lowe didn’t include the Celtics in the next tier.

He effectively ranks Boston as the 6th best team, placing them in the same group as Toronto and Washington, but below Cleveland, San Antonio, Houston, and Oklahoma City. This ordering reflects the national sentiment on how the Celtics rank within the NBA hierarchy.

Sure, Cleveland is a level above Boston, and should be favored to win the East. But I won’t concede that the Spurs, Rockets, and Thunder are leaps-and-bounds better than the Celtics. Their rosters are more talented, but the Celtics aren’t far behind, and they’re clearly superior to Washington and Toronto.

The Celtics will return only four players from last years 53-win squad. They still have rebounding issues, it’s unclear how quickly they’ll gel on defense, and they’re relying on young players in key rotation spots. All these issues, coupled with the influx of new players, have the national media believing the Celtics won’t surpass their win total from last season.

Boston still has a chance to surprise teams. Despite the youthful roster and lack of size, the pieces still fit together. The team is ripe with skilled wings and players who can guard multiple positions. Additionally, the partnership of Gordon Hayward and Kyrie Irving will work better than the other star-pairings around the league.

This crazy offseason saw several all-stars joining forces with other all-stars. In addition to Hayward and Irving, we have Jimmy Butler and Karl Anthony-Towns in Minnesota, Chris Paul and James Harden in Houston, along with the trio of Russell Westbrook, Paul George, and Carmelo Anthony in Oklahoma City.

Kyrie and Hayward are the best fit. At the very least, they should have the fewest issues trying to integrate their games. Kyrie is the top scoring option/lead ball-handler. Hayward is the spot-up shooter/off-ball cutter/secondary playmaker. Both are comfortable playing with or without the ball, and they’re fortunate to have Brad Stevens to help ease the transition.

In Houston, Paul and Harden are playing with ball-dominant all-stars for the first time in their respective careers. In Minnesota, Towns and Butler have never played with so much talent around them, and they must learn to play off one another in half-court sets. In Oklahoma City, one of the three stars will have to sacrifice major shots… and I’m guessing it won’t be Melo or Westbrook.

Despite the overwhelming talent disparity between the west and east, the Celtics should remain competitive with all the top western teams. The Warriors, however, are a different story.

Page 2: Where Marcus Morris isn’t Shy About his Confidence

[Marcus Morris] is taking appropriate time to improve his conditioning after missing the early part of training camp for an assault trial, which ended with an acquittal on all charges. But he can already envision how he will fit into the new Celtics roster, how he will adjust to a new role at the 4 after spending most of his time last season as a small forward for the Detroit Pistons.

Morris has high hopes for how the transition will work out.

“I feel like it’s going to be really easy,” Morris said. “I don’t think I can name two or three 4-men that can really do anything with me on the floor, you know what I mean? They might be a little bit bigger so I’m just trying to keep my strength and be a great rebounder. But on the offensive side it will be too easy.”

“I think there are a lot of people that are playing smaller at that (power forward) spot,” Stevens said. “And I think inevitably one of the ways that we try to play is our wings do very similar types of things. So he’s not doing things that are much different than 2s or 3s. And then we go to who’s got the matchup we like and we post that person, or if he’s being guarded by a big and he can play in space and catch behind the 3 and shoot, or play off the dribble, or even in a 4-5 pick-and-roll, those are all things that he can do. So we’re excited about what he would bring to us in what would be probably a long and versatile lineup.”

Rarely do we see a Celtic newcomer speak with so much bravado, and with Morris forced to miss the beginning of training camp, I would have expected the subdued, generic quotes in his first interviews. Evidently, Marcus Morris can’t hold back his excitement joining his new team.

In the article, he speaks confidently about how he thinks he’ll start. The transition from power forward from small forward doesn’t seem to bother him. In Detroit, he predominantly played on the wing with two traditional wings down low. On this Celtic team, with the thin big-man rotation, Morris should see most minutes at the four.

Despite the NBA’s small-ball revolution, players are still reluctant to play down a position. LaMarcus Aldridge, Al Horford, and Anthony Davis see themselves as power forwards, despite the changing style of play, and their ability to impact games as the lone big man. Lebron James, Paul George, and Carmelo Anthony all balked at  playing power forward at various points in their careers. Even Kristaps Porzingis said he’d rather not play center in an interview last week.

These guys are weary of the increased physicality of playing down low. With Marucs Morris specifically, there aren’t too many power forwards in the east who can exploit him on the block, or overmatch him with physicality.

For the upcoming season, the best power forwards from the East will be (in no particular order) Kevin Love, Porzingis, Serge Ibaka, and maybe Aaron Gordon and Jabari Parker. Cleveland already said they plan on starting Love at center. There aren’t any physical bruisers who can overpower Marcus Morris. And he won’t be forced to defend bigger guys like Myles Turner, Joel Embid, Andre Drummond, or Hassan Whiteside.

In sum, I’m happy Morris is embracing his new role as a stretch big. It was unclear whether he’d be willing to accept a new position after two years playing effectively on the wing. He’ll help tap into the positionless basketball Brad Stevens has always yearned for.