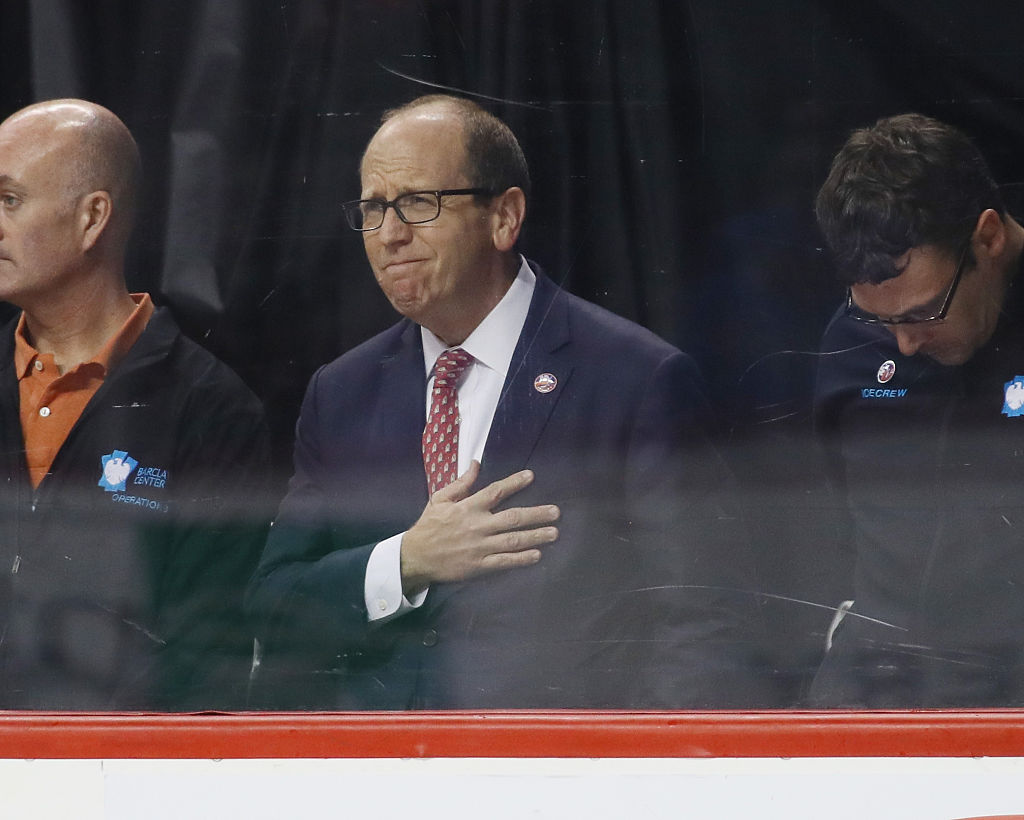 There wasn’t much talk of the Islanders struggling power play or debate over why Ryan Pulock remains out of the lineup on Tuesday. No, with the Islanders inactive the conversation turned to the team’s ongoing hunt.

But it was more than just the usual conjecture on Tuesday, it was a declaration from Islanders’ ownership on just where their focus is on the matter. During a sit down with reporters in midtown Manhattan co-owner Jon Ledecky made the most substantive comments about the team’s future and their plans for Belmont to date.

“We have a singular focus at playing at Belmont Park,” Ledecky said according to the New York Post. “Take away all the other noise. That’s the objective that will give the New York Islanders the best chance to win a fifth Cup. Everything about going here, there and everywhere else is absolute noise to us right now.”

The Islanders have been a team in search of a permanent home long before John Ledecky and Scott Malkin took over majority control of the franchise at the beginning of last season. And the pair are trying to accomplish something that numerous ownership groups have not been able to produce, which is a sustainable home for the Islanders.

Repeated attempts to renovate the Nassau Coliseum yielded no results and the team’s move to Brooklyn, which at first appeared to have finally brought some stability to the organization, quickly became an issue of its own.

So now Ledecky and Malkin, along with Sterling Project Development and Oak View Group, are putting all their eggs in the Belmont basket.

“We’re focused on getting that shovel in the ground and move forward on Belmont,” Ledecky said according to NHL.com. “We’re not concerned at all [about the interim]. Our concern and our focus should be on Belmont. Off of that, everything else becomes clear. We either get Belmont or we don’t get Belmont. That’s exactly our focus — to get Belmont.”

There is no plan B for the Islanders or ownership and unlock the New York City Football Club Belmont is the Islanders preferred destination. The MLS club is reported to be more interested in sites in the Bronx or Queens than a site in suburban Long Island.

Ledecky: “We are not looking at other places, other things, other opportunities. We want to make Belmont a reality.” (Unlike NYCFC)

The Islanders, however, appear ready to move closer to where a majority of their fan base resides. Imperfections at the Barclays Center have not made fans or team officials happy. The ice, attendance, obstructed view seating and the distance that some fans have to travel are just a few of the complaints often brought up when discussing the arena.

Still that won’t be enough to drive the Islanders out of Brooklyn after this season, with Ledecky confirming the team will play at the Barclays Center next season as well.

After that it’s anyone’s guess.

And for anyone holding their breath for a potential return to Nassau Coliseum shouldn’t hold it for much longer. Ledecky, again, shot down the idea of the Islanders returning to downsized venue on Hempstead Turnpike. Even as a temporary venue, Ledecky wasn’t keen on the idea.

“Nassau Coliseum is a lovely spot, but the commissioner of the NHL is on public record as saying it’s not a viable for a NHL team, so that wouldn’t be our home either,” Ledecky said via the New York Post. “That’s not something that is being considered. We’re considering Belmont Park. Period. The End.”

The Islanders submitted their bid for Belmont on September 28 to the state of New York, but there is no timeline for just how long it will take the state to select a winner. Also few details are known about the team’s proposal.

What we do know, according to the Post, is that Ledecky expects it to take 20 months to build the arena and it appears they will not be asking for any public money for the arena.

“Those three groups [in addition to ownership] have fully committed to financing the arena,” Ledecky said.

By the accounts from people who attended the sit down with the Islanders’ co-owner there is confidence that the team’s proposal will prevail in the end. Islanders fans have heard this before though and won’t be easily swayed into the optimistic outlook that Ledeck and company have.

But the comments made to reporters were important to make. Up until Tuesday the fans had not heard from Ledecky on his plan to build the team a permanent home.

Ledecky also stressed the Belmont bid is “not a real estate” play by the Islanders owners. Says it’s all about building new home for team.

Ledecky said he wants his legacy to be getting this building done and winning more Cups. #Isles

The message was clear and concise and hit on some of the main points that needed to be addressed. The goal, at least what Ledecky is saying it is, is not a development deal but rather to build the Islanders a home they can call their own. Then add that long-awaited fifth Stanley Cup championship to the team’s history.

It sounds so simple, but just ask previous owners just how easy it is to find the team a permanent home.