Three years later, I have to (gulp) praise Brian Cashman for the state of the Yankees 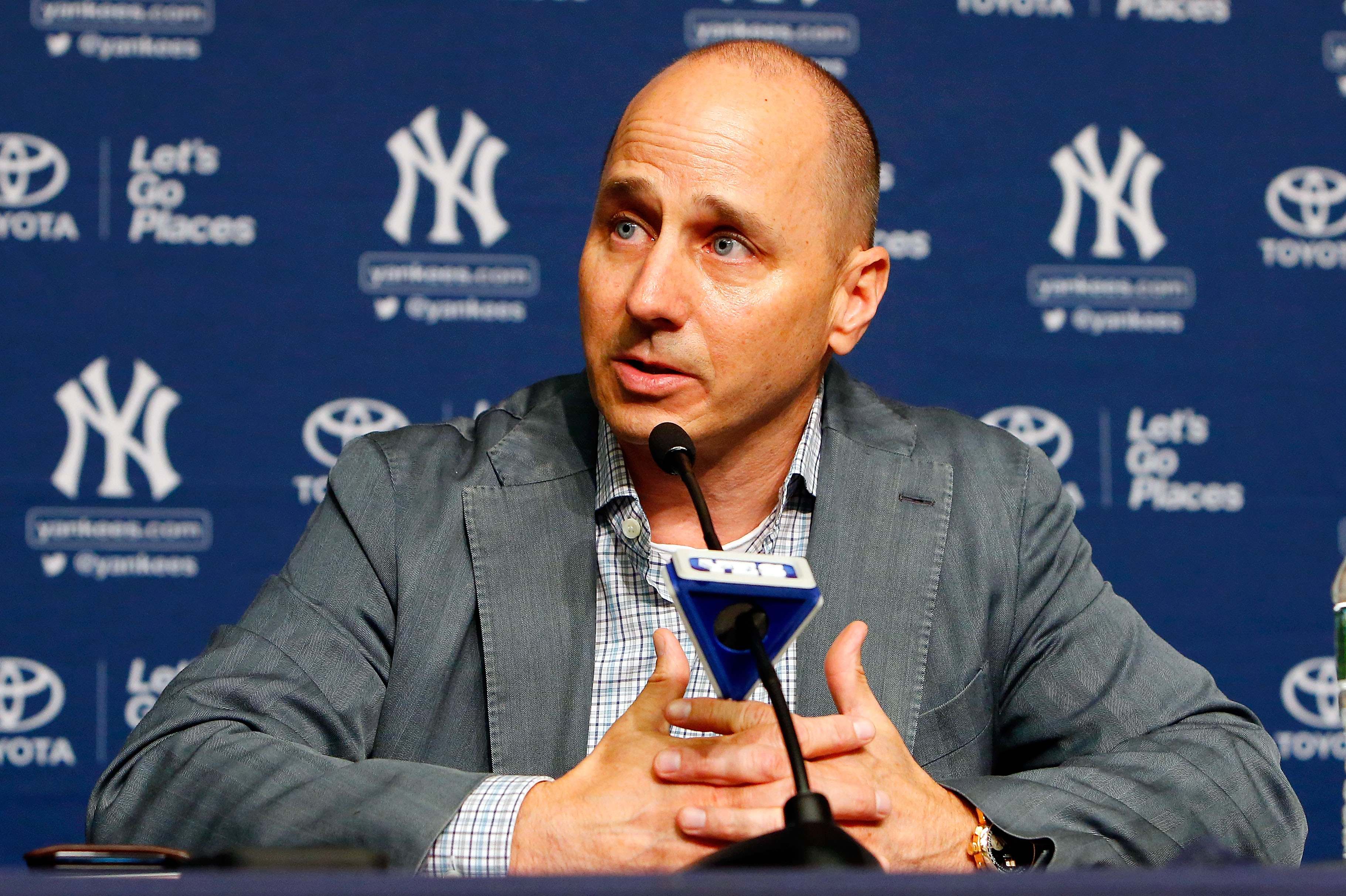 Three years later, I have to (gulp) praise Brian Cashman for the state of the Yankees

Have you ever had one of those “I have had it! Enough!” type of moments in life, where you decide to change what you’ve been doing? I had one of those on October 10, 2014, three years ago this week, when I heard the news that New York Yankees GM Brian Cashman was  getting a new contract from the Yankees. This, despite the team not making the postseason two years in the row, and having ignominious playoff defeats for the three previous playoffs.

It seemed crazy to me to give the guy who thought it was a great idea to let Robinson Cano go, but pay Jacoby Ellsbury $153 million, a new deal. Not to mention the barren prospects that Cashman’s farm teams had produced. Fredo had one tool in his toolbox — throwing lots of money at (and trading for) players who had seen better days. Just take a look at the 2014 Yankee payroll to see what I mean. I still cringe at the thought of Stephen Drew in pinstripes!

That fall, I was going through a bad time. My purse was stolen when I was eating at an Upper West Side Thai restaurant called Land (don’t ever go there!) and the place erased the surveillance tape showing my purse being stolen, even though they knew the cops were coming to view it. The thief rang up many hundreds of dollars of charges on multiple credit and debit cards, leaving me a mess that took weeks to clean up, including getting the keys to my house changed. And thanks to the restaurant erasing the tape, the thief got away with it (and also pocketed my iPod Classic, too!)

So I wasn’t exactly in a good frame of mind then when Squawker Jon told me on the phone that day about Cashman getting a new contract. I was walking by Grand Central Station on that Friday afternoon. My office had closed early that day due to Columbus Day weekend, and I had one of those “As God as my witness, I will never do such and such again” moments of clarity as I roamed Manhattan that day.

I knew then that I couldn’t keep on doing what I had been doing in the blog. Even I was getting bored with griping about the way Cashman was running — make that ruining — the Yankees.

In addition, instead of baseball being my sole passion in life, I had recently developed other interests, like pursuing writing on other things, as well as running. I was becoming a more positive person, looking for positive things in life. So I knew things would have to change in this blog.  I wrote here back then:

Now is decision time. Do I really want to spend the next three years writing in this blog solely about the Yankees? Spending my spare time rooting for a team that is not really very likeable, run by some extremely unlikeable people? We have been doing this blog since 2006, and I have newer interests in life. I run in a 5K race (or more) pretty much every weekend now, and I have other things going on in my world these days.

I am writing in different places as well, on different topics, and am getting rewarded for it. I recently beat out over 3000 other entries to win an all-expenses-paid opportunity to attend a weeklong magazine writing workshop [for Guideposts Magazine], which is something to be thankful for. And it is a lot more positive than writing for the umpteenth time the obvious — that Cashman is a lousy GM.

All of this is to say that I don’t really find watching the Yankees much fun anymore. And we are going to have more of the same (actually, I think things will be worse — the Mets have a brighter future than the Yankees these days!) in the near future. And for the last few years, writing about the Yankees has been a constant string of negativity, as this team just hasn’t been much fun.

That 2014 team was boring (remember, the big excitement then was the endless Derek Jeter farewell tour, when he got to bat second all year even though he had the worst OPS of anybody in the starting lineup.)  I wrote back then:

What is there to look forward to next year, other than maybe Betances? (Even I am not excited over A-Rod at 40!)

But I am not going to shut down the blog. That would mean Brian Cashman will have won.

However, I just can’t see why I should expend the psychic energy involved with writing regularly about this dysfunctional situation. Writing 100 columns about why Cashman must go is not exactly my idea of fun.

So this blog will be a work in progress. Stay tuned.

Me three years ago at the top of the Rocky steps after a 5K. A lot has changed since then — both with me and the Yankees.

So it is three years later. In that time, a lot has changed in my life. My hobby of running 5Ks (back then, doing 3.1 miles at once was a huge deal for me!) turned into running 10Ks, then half marathons, then marathons and triathlons. I dropped a ton of weight along the way, too. I went from volunteering at the TCS NYC Marathon to actually running it two years later. And I’m training to run it again in less than four weeks.

This fitness journey has taken a lot of time, meaning I haven’t watched the Yankees as much as I used to, as I mentioned the other day in a Squawk.  I’ve also been writing on different topics, both here and elsewhere.  I’m simply not the same person I was once. I’m still a work in progress, to be sure, but a lot has changed for me in the last few years.

And the Yankees are not the same team, and that’s a good thing. Declining attendance in 2015 and 2016 led the front office to bring better food and more fan-friendly options to the ballpark this year, starting to make the stadium more like Citi Field.

As for Cashman, he still made some moves I didn’t like (getting Nathan Eovaldi, throwing money at Chase Headley) but he actually made some tough decisions as well that were the right moves. Didi Gregorius was the perfect choice to replace Derek Jeter; not only is he a great young player, but he’s got a fun personality that is infectious. I still wish Robinson Cano were at second, but Starlin Castro, when healthy, is awesome.

Cashman deciding to rebuild in 2016, including parting ways with A-Rod, was the right thing to do. Trading for Aroldis Chapman, as odious as it seemed at the time, helped the team in 2016, and trading him to the Cubs brought Gleyber Torres and got back Adam Warren, who was traded there for Castro. Trading Andrew Miller garnered Clint Frazier.  And getting Todd Frazier, David Robertson, and Tommy Kahnle from the White Sox made a huge difference this summer. Developing Luis Severino, Aaron Judge, Gary Sanchez, and Greg Bird (with more to come!) helped bring on the new generation of Yankees. The future is bright.

I admit it, I love saying “Toldja!” when proven right. But believe it or not, I’m sometimes happy to be wrong. And I’m very happy to see the Yankees on the upswing again. I still think Cashman is a jerk, but I have to tip my Yankee hat at the great job he has done to make this team worth watching again — and to get them into the postseason again, this time with a real chance to compete.

So when it comes to Brian Cashman, that means I have to say the three little words that men most long to hear from me: “I was wrong.”