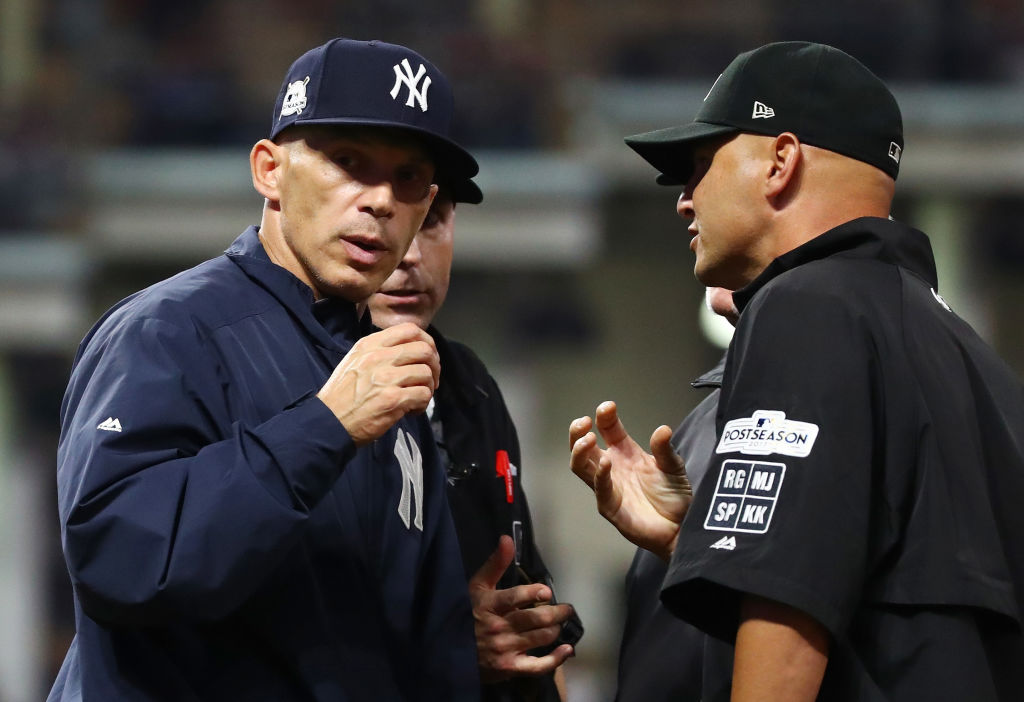 The New York Mets are in the midst of a managerial search, but their quest to replace Terry Collins doesn’t appear to be in a real hurry. General Manager Sandy Alderson reportedly has a list of ten candidates to fill Collins’ shoes, and he plans to interview most of them before reaching a decision. One name that hasn’t gotten a ton of attention is Yankees’ manager Joe Girardi, whose contract is up at the end of the season. There are rumblings that Girardi could leave the Bronx after the playoffs, FanRag Sports’ Jon Heyman reports, and that could make him one of the hottest candidates on the managerial market.

CLEVELAND, OH – OCTOBER 06: Joe Girardi #28 of the New York Yankees argues a call in the tenth inning against the Cleveland Indians during game two of the American League Division Series at Progressive Field on October 6, 2017 in Cleveland, Ohio. (Photo by Gregory Shamus/Getty Images)

Girardi is popular with Yankees’ owner Hal Steinbrenner, but Heyman’s sources indicate that he is considering walking away from his post. The Yankees hired Girardi prior to the 2008 season and he has been their skipper ever since, including their World Series title campaign in 2009. This season is Girardi’s 10th at the helm of the Yankees, a long time for any manager to remain with one team. There are also some high profile managerial openings right now, including the Mets’ job and the Boston Red Sox’ post, giving Girardi leverage to do whatever he wants after the season is over. MetsBlog’s Matt Cerrone has heard from sources that Girardi is aware of Alderson’s interest in him and speculates that the Mets and Red Sox may both wait to fill their posts until Girardi’s situation is resolved.

It makes sense to wait and see what Girardi’s status is before the Mets make a move to hire a manager. Girardi would be the top candidate on the board if he decided to leave the Yankees due to his experience and ability to win in the New York market. The Mets would also gain a ton of credibility if they managed to hire Girardi away from the Yankees, something that could help the front office after its embarrassing anonymous smear campaign against Collins. Even if Girardi decides to stay put the Mets do have a ton of interesting candidates to explore, but there is no point to rush. Alderson knows this and will take his time to ensure he finds the right man for the job.