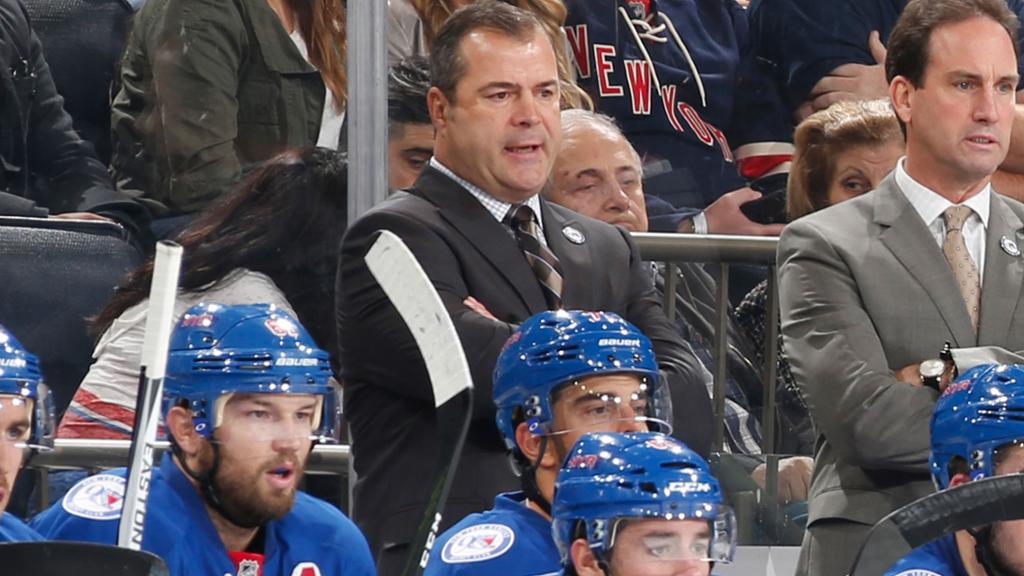 After a third Rangers loss in four games to open the season coupled with yet another in a long line of questionable personnel decisions from Alain Vigneault, the Blueshirt Faithful is beginning to wonder how warm the head coach’s seat has gotten.

1. The biggest criticism of AV this early season has been his personnel decisions on defense. Lucky for us, TheNYRBlog has obtain exclusive video of Vigneault’s lineup decision making process…

I’m not here to make excuses for Vigneault because most of his decision making has been indefensible, but I’m also not going to kill the guy for sending an early season message to Brendan Smith and Anthony DeAngelo that their play hasn’t been up to snuff. Now, if their replacements Holden & Kampfer are still getting regular shifts next week, I won’t be so forgiving, but for now, I can live with AV holding players accountable.

Larry Brooks at the New York Post reported the other day that Vigneault had some initial reservations on what seemed like the obvious pairing of McD and Shattenkirk. For AV to get the most out of McDonagh’s talents he needs his captain to have a heavy dose of defensive zone starts, while the point producing Shattenkirk is best served with a generous portion of offensive zone starts. So you can see the conflict.

While AV went against his better judgement and paired the two All Star defensemen to open the season, since the defensive debacle in Toronto he has rightly split the top pairing. Where he’s gone wrong is with the adjusted pairings. Instead of bumping up the overmatched Marc Staal, a duo of Skjei-McDonagh feels like it’s beyond overdue. Meanwhile Shattenkirk’s defensive deficiencies could easily be covered up by last year’s version of Smith. So let’s hope Smith found a mirror to peer into the last two games.

As far as that final pair, a rotation of Staal/Holden/DeAngelo should be sufficient until two of them separate themselves. Now it’s just a matter of if AV continues his trend of inferior talent evaluation or he finally turns over a new leaf. I wouldn’t count on the latter.

I’d say he’s stubborn, but I think we all know Tortorella cornered that market.

2. With Filip Chytil being jettisoned to the AHL and DeAngelo already finding himself in the press box, the narrative that AV hates young players has reappeared. While I do think AV has trust issues with rookies (what coach doesn’t?), one look at games played by JT Miller, Kevin Hayes, Jesper Fast, Brady Skjei along with the increased responsibility for Pavel Buchnevich and Jimmy Vesey this season proves the head coach is more than comfortable leaning on young players.

Have there been times when youngsters such as Skjei and Buchnevich are overlooked during a game in favor of undeserving veterans? Abso-freakin’-lutely. But let’s not forget those same vets where also given preference over Keith Yandle, Brendan Smith and Lee Stempniak. Not exactly spring chickens.

So again, this comes down to a talent evaluation issue for Vigneault, not an age one.

And if you think AV is going to change, you’re crazy. He’s been too successful for too long to think he’s finally going to see the light and learn from his mistakes. Ain’t happening folks. Similar to most coaches, he has “his guys” and will, to the team’s detriment, lean on them when the going gets tough.

3. I also feel Rangers GM Jeff Gorton has put Vigneault in a tough position this season. On one hand he made a win now move by signing Shattenkirk, but contradicted that acquisition by trading their #1 center for assets to build for the future. So what should AV be doing? Putting a line-up out there that, in his mind, gives him the best chance of winning each night? Or live with the growing pains of DeAngelo & Chytil while potentially sabotaging another chance for Lundqvist to win a Cup?

And that’s not even mentioning that AV might be coaching for his job right now. I know he received a shiny new extension last January, but if this spirals out of control quickly Gorton might have no choice.

4. I was ridiculed this summer for predicting the Rangers would be a bubble team this season. My reasoning had to do with the lack of depth down the middle. And sadly, my concerns have become a reality. Now that Chytil is destined to either remain in the AHL or be shipped back overseas, the Rangers find themselves with a serious problem at center ice. Sure, Miller has had some nice initial chemistry with Nash, but one look at him in the defensive end is all the proof I need to know he belongs back on the wing.

But where do they turn? None of the rumors involving Matt Duchene include the Rangers while Edmonton seems content on holding onto Ryan Nugent-Hopkins.

Unless Boo Nieves miraculously becomes the answer, this might get worse before it gets better. Especially when the Rangers next 8 games are @BJs, Devils, Pens, Isles, Preds, SJ, Arizona and @Montreal. Not easy my friends.

5. Sure blame AV while Nash, Grabner, Miller, Kreider, Buchnevich, Hayes, Vesey and Desharnais have combined for ONE GOAL.

6. It takes the Rangers longer to get started than my grandfather when he forgets his Viagra.

7. Your moment of Shestyorkin Zen:

Igor Shestyorkin stops 25 of 26 for his 13th consecutive win. Made a big save on Enver Lisin's late coast-to-coast effort. pic.twitter.com/vcvyiwnvJq

9. Remember when the Rangers power play used to destroy their own momentum?

Yeah, not so much anymore.

10. And how about that no look back-hand feed from Buchnevich?

11. Lias Andersson continues to prove that sending Chytil back to the Czech Republic is probably the best option for his development…

Lias Andersson (#NYR) scored the game-deciding goal for Frölunda against Gap Rapaces in CHL tonight. Picked up an assist on Rasmus Dahlin's opener too. pic.twitter.com/BqeYERPstt

12. I’ll leave you guys with this. We all know this team has a ton of skilled players who want to play a north/south game. But when opponents start putting up speed bumps to curb the Rangers transition game, I wonder if this roster can grind out wins with a relentless forecheck and physicality. I’m concerned that this has become too much of a one dimensional team who can be easily game planned for. I wouldn’t mind a Wayne Simmonds or Brendan Gallagher type player added to the roster at some point this season. Something to keep an eye on.