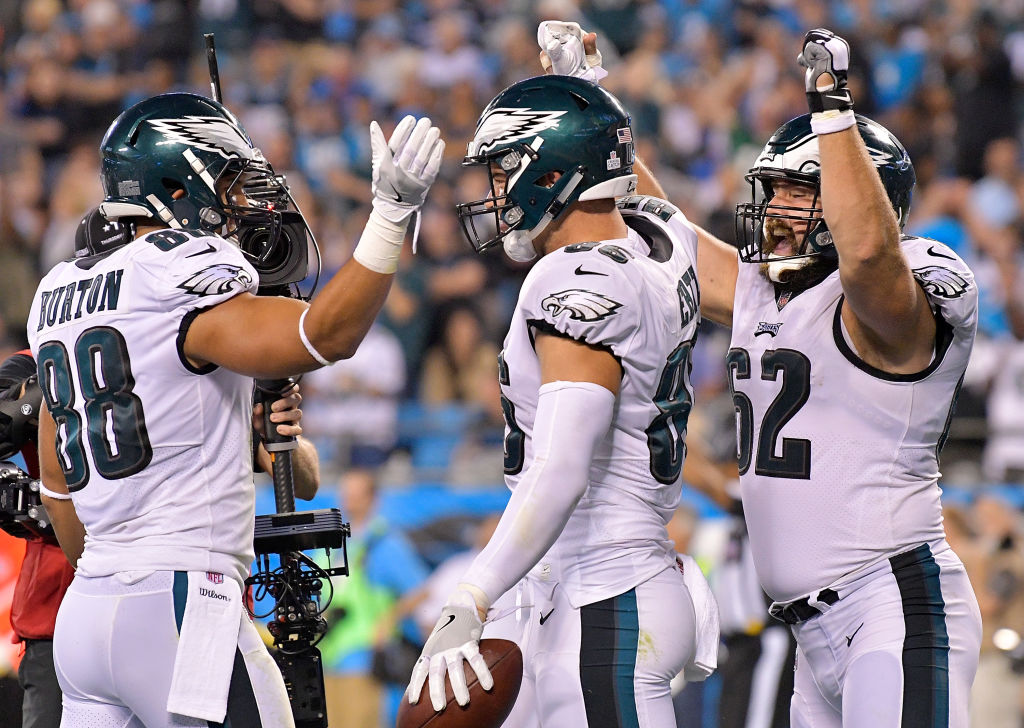 It was a battle of two of the top teams in the NFC, and it was the Eagles who reigned supreme as they defeated the Carolina Panthers by the final score of 28-23.

With right tackle Lane Johnson out with a concussion, his presence was missed early on when Julius Peppers escaped Halapoulivaati Vaiti on the Eagles first possession to force a Carson Wentz fumble.

Despite Vaiti’s early struggles, the Eagles were able to jump out to a 3-0 lead on their next possession thanks to a 50-yard field goal from the sensational Jake Elloitt.

The Eagles would soon find out that not only would they have to battle the Panthers, but also the refs as a highly questionable pass interference call on Jalen Mills put the Panthers in position to eventually set up a 39-yard Graham Gano field goal.

Through the rest of the quarter, the Eagles continued to struggle offensively due to Carolina’s blitzing attack swallowing up Wentz.

As for the Panthers, they had no issues with moving the ball early on. Cam Newton not only spread the ball around, but also got it done with his legs, rushing for a 16-yard touchdown in the second quarter.

Soon after, the Eagles would get a huge break when Fletcher Cox tipped a Newton pass, which ended up in the hands of Rasul Douglas, giving the Eagles the ball on Carolina’s 12 yard-line. The Eagles would capitalize with a one-yard touchdown pass from Wentz to tight end Zach Ertz.

The Eagles started the second half with yet another interception, this time by Patrick Robinson, setting the Eagles up deep in Panthers’ territory. This time, it only took two plays for Wentz to finds Ertz for their second touchdown of the night. The touchdown was capped off with a successful two-point conversion with LeGarrette Blount running it in.

The Eagles nearly had their third pick of the game, however, another Mills’ pass interference call not only negated the interception, but pushed the Panthers 30 yards down the field. The Eagles were able to hold Carolina to a 20-yard field goal.

Depsite another Gano field goal, the Eagles continued their momentum, getting it done through the air. Wentz went 5-for-5, completing the series with a 24-yard touchdown pass to Nelson Agholor.

The Panthers would keep it close on their next possession. A roughing the passer call on Derek Barnett gave Newton and the Panthers a fresh set of downs deep in Eagles territory, setting up an eventual one-yard touchdown pass to running back Christian McCaffrey.

As Carolina continued to make a late fourth quarter push, the Eagles defense stepped up big time, getting pressure on Newton. Newton would throw his third interception of the game, this time to Mills.

Newton and the Panthers had one last shot, however, the Eagles defense once again held up strong, sending them home with their fifth win of the year.

The Eagles will return for Week 7 on Oct. 23 when they host the Washington Redskins on Monday Night Football. Kickoff is scheduled for 8:30 p.m.