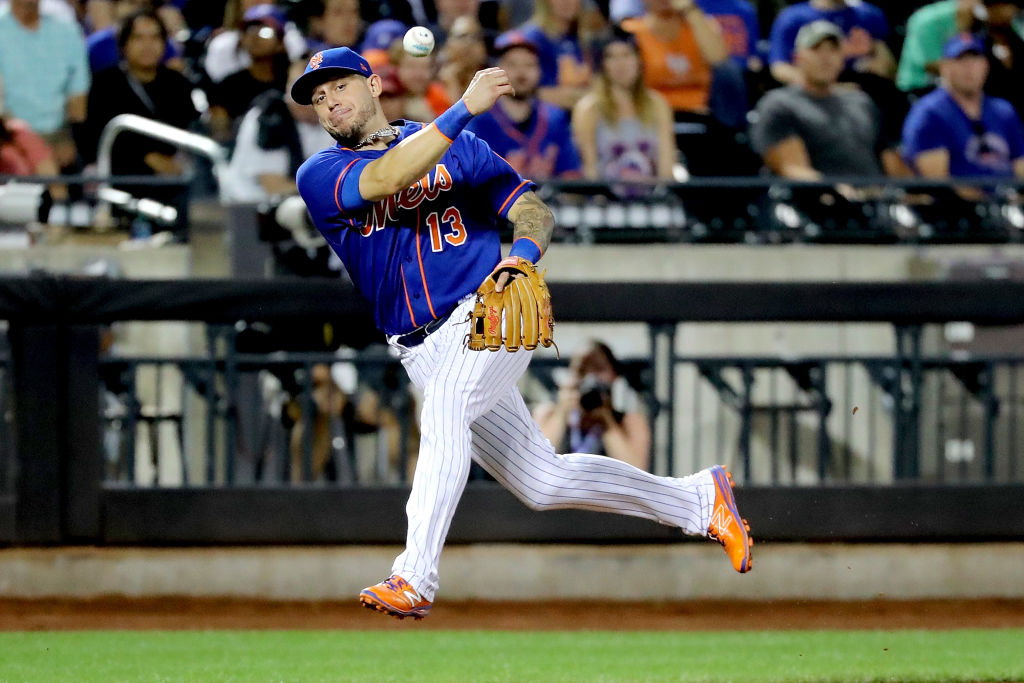 Now that the 2017 season is over for the New York Mets, we have been looking back at the year that was. After taking a more general view of the offense, pitching, and coaching staff, it’s time to take a look back at the Mets’ players. This series will take a look at every player on the active roster for the Mets at the end of season from A (Nori Aoki) to W (David Wright). The review will look at their season statistics, stories, and what role (if any) they will have next season. We continue our series today with a look at infielder Asdrubal Cabrera.

NEW YORK, NY – SEPTEMBER 26: Asdrubal Cabrera #13 of the New York Mets throws the ball to first base in the ninth inning against the Atlanta Braves on September 26, 2017 at Citi Field in Flushing neighborhood of the Queens borough of New York City. (Photo by Abbie Parr/Getty Images)

Story: After a surprisingly productive season in 2016, the Mets felt very comfortable rolling with Asdrubal Cabrera at shortstop to start the 2017 season. Cabrera was widely viewed as keeping the seat warm for future shortstop Amed Rosario, but if he played like he did in his first year with the Mets things would be fine. That didn’t happen, as Cabrera struggled at the plate to start the year and noticeably lost a step on defense. Things went from bad to worse as Cabrera jammed his thumb attempting to make a diving catch on May 7th, and that injury plagued him from the next few months. The Mets placed Cabrera on the disabled list twice in the next two months, and during his second DL stint they decided to move him off of shortstop and over to second base. The move incensed Cabrera, who demanded a trade in San Francisco and told the media that he was never consulted about a potential move. Cabrera said he would waive his trade demand if the Mets picked up his 2018 option, a move that General Manager Sandy Alderson did not make at the time.

The Mets didn’t cave to Cabrera’s trade request but moved him around the infield, giving him regular playing time at second base and third to boost his trade value. Teams didn’t show a ton of interest in Cabrera despite his newfound versatility, so he was the one true veteran left in the lineup after the Mets’ midseason purge of players on expiring contracts. To his credit, Cabrera didn’t mail it in and played well down the stretch, batting .307 in the second half with six homers and 35 RBI’s, which is impressive considering he spent much of that time with little protection around him in the lineup. Cabrera also displayed some aptitude for handling third base, making some mistakes early but transitioning well as he got more reps at the position. The Mets also liked what they saw in terms of leadership from Cabrera, who as one of the few veteran leaders on a team loaded with rookies down the stretch.

Cabrera gets a slight downgrade for his midseason temper tantrum after getting booted from shortstop, but he played much better once he moved off his natural position. If you look at Cabrera’s overall numbers they were solid once again, giving him a place in a potential 2018 Mets’ lineup.

The Mets have strongly hinted that they will pick up Cabrera’s 2018 option, and that move makes a ton of sense. Cabrera is due at least $2 million if the Mets choose to buy out his contract, so this is essentially a $6.5 million decision. With as many questions as the Mets have in their every day lineup, having someone with the ability to produce like Cabrera is well worth the price tag his option carries. Cabrera can also play at either second or third base now, giving the Mets options on how to address their other needs going forward. Expect the Mets to pick up that option and keep Cabrera in the fold for next season as one of their few veteran anchors in the lineup.

Check back tomorrow as our Player Review Series continues with a look at relief pitcher Jamie Callahan!