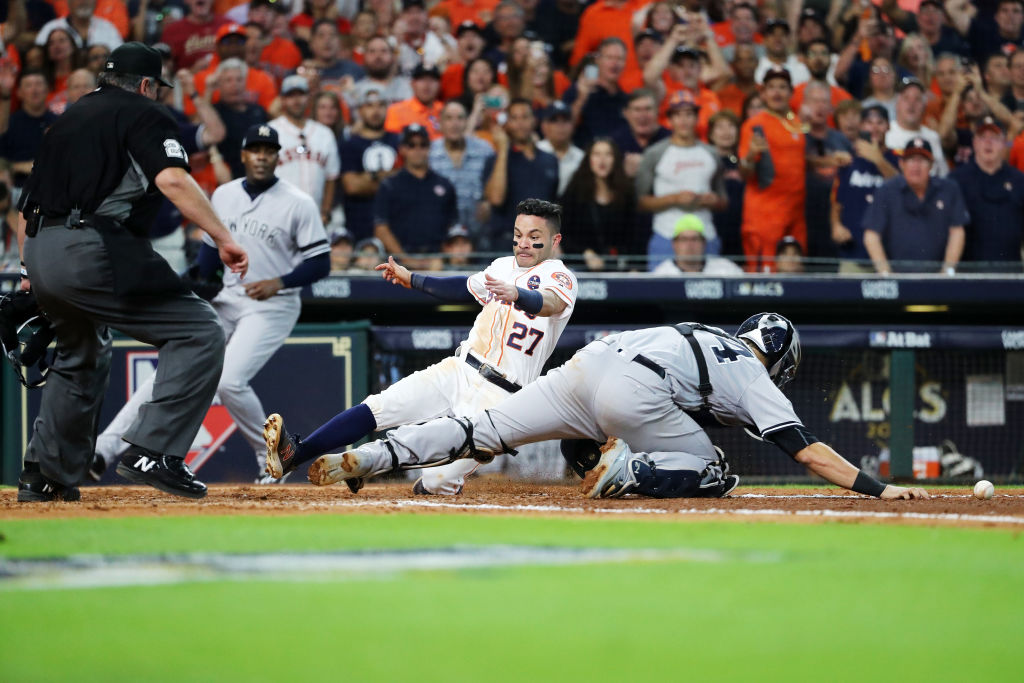 The Houston Astros took a 2-0 lead in the American League Championship Series after breaking a tie in the bottom of the ninth inning on Saturday, but the game-winning run didn’t come without controversy.

With one out, Jose Altuve managed a base hit against Aroldis Chapman, which gave the Astros some life. Carlos Correa then followed up with a base hit into the gap. It was cut off nicely by Aaron Judge, whose relay throw went to Didi Gregorius at second base. Altuve rounded third base and attempted to score, so when Gregorius fielded the throw, he then hurled the ball toward home plate.

The throw was on time, but it was slightly off line, and Gary Sanchez couldn’t handle it properly. That allowed Altuve to score the game-winning run.

Yankees manager Joe Girardi came out to argue, however, and he appeared to have a point. Correa appeared to interfere with Gregorius, which may have affected his throw to home plate. Correa slid into second base, and then popped up and made contact with Gregorius (watch here). A case for interference could certainly have been made, but the play was not reviewed, and the Astros went on to win the game.

Social media erupted immediately after the play, and here are some of the best tweets about it.

Also, what about the interference on Correa by 2B w/ Didi running into him as he threw the ball home??? No review?😤

Correa did not interfere, Girardi. He ducked to avoid Gregorius. #ALCS

Yeah let’s ignore Correa running into Didi (obstruction) 🙄 … it was a bad throw, and a bad play by Sanchez. Just bad all around.

Which was forced by the allowed interference on the legal Correa pop-up slide. Set up the relay correctly and Didi fires a strike.

Correa had every right to 2nd base.

That ending's not on Gary. I'm not even a fan of the Yankees, but it looks like Correa interfered in the throw.

Correa's "bump" of the 2B man caused the off throw. That must have been the whole plan if he hit a surefire double. Only way you waive 'Tuve

The general consensus is that Correa did interfere with Gregorius somewhat, but Sanchez needed to do a better job with the throw. The ball hit him in the glove, and we now know why he’s been criticized for being a defensive liability in the past.

Still, this play could’ve gone either way, and will be talked about for awhile.