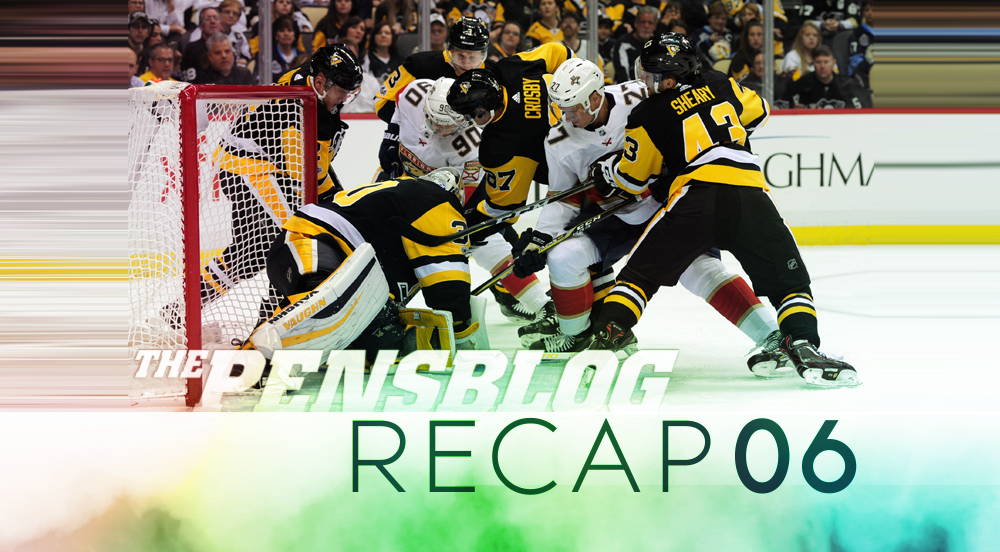 Stop me if you’ve heard this one before:

The Penguins played a high scoring game against a Florida team last night.

Coming off the heels of a combined 9 goal display in Tampa, the Pens invited the Panthers to the Consol Energy Paints Arena to combined for 7 goals as the Pens held on though 46 shots against and 5 powerplay chances against to bump themselves above .500 6 games into the season.

Matt Murray was, by and large, brilliant in this one, making 43 saves.  But his great was probably overshadowed by Crosby being a damn warlock in the two goals he scored.  Spoiler alert: they were pornographic.

Here's the #Pens line combos and defense pairs for tonight's game against the Panthers. pic.twitter.com/IA3F2J1SGg

Reunification of Sid and the Kids.  That was fine.

On the night, the Pens only got 3 powerplays, down from the 75 per game average they’ve been getting the last few games.  They only needed their first chance of the night to extend the 3 game streak of converting a PP opportunity, bringing them to 5 in the last 3 outings.  A more familiar top unit of Crosby, Malkin, Phil, Letang, and Hornqvist ran the show against an ugly looking Panthers PK.  It was ugly in the sense that as Malkin, Letang, and Phil worked the perimeter, the Panthers looked like a crooked dick with 2 balls.

This Chode Formation opened up a slit for Phil to feed 87 down low for outrageous deflection #1 on the night.

The Pens early lead would last about 20 minutes of game play before the Panthers would strike back.  Ruhwedel made a nice play at the blue line to initially break up the rush, but as Geno swooped in to gather the puck, he pissed it away and the Cats were in on goal.  Huberdeau’s rangey ass was able to dance Malkin and feed Dadonov.  As Maatta and Ruhwedel scrambled, the biscuit found its way back to Huberdeau’s tape to walk Malkin again and finish the play.

Thirty seconds after scoring, the Panthers would head to the powerplay with a chance to take the lead as Crosby went off for tripping up Dadonov.  Instead, it was the Pens that would regain the lead with some high pressure in the neutral zone.  The Kuhn stepped up on Barkov and forced him to vomit on his sac.  Kuhn walked in looking poised to score his 900th shorthanded goal of his short career, but got hauled down by Yandle.  Greg goddamn McKegg was there to gather the remains and go backhand shelf on Reimer.

However, about a minute after McKegg’s beauty, Hags would head to the box to give the Cats a short 5v3 before transitioning to a 5v4.  It was right as the the 87 penalty expired when the Cats tied shit up.  This time, the Pens couldn’t get a hold of the puck and cleanly clear it.  Florida worked it up high for Trocheck to freeze the entire PK and give Yandle a clean look at the net.  Murr made the initial save through the mass of bodies, but didn’t have a chance in hell at cleaning up the rebound.  Dadonov and Huberdeau, on the other hand, did. Sully challenged it for goaltender interference for the first time of the season, was incorrect, and we had a tie game.

A couple of minutes later, Greg goddamn McKegg and his line of heathens popped back up again.  With 6:24 remaining, Hags-McKegg-Hornqvist did the damage with an unreal shift coming from Hornqvist just hounding the puck everywhere that it went.  Rust got himself on for Hags at the end of it, worked the puck from down low up to Maatta for the point blast with Hornqvist all in Reimer’s grill.  Impossible to keep 72 from not scoring there. Panthers challenged for goaltender interference, but the goal was confirmed.

Pens would end up getting a couple really good looks the rest of the way in the 2nd, had to kill off another penalty, and Hornqvist had yet another goal rightfully disallowed after he steamrolled Reimer.

But in the 3rd, Crosby would reappear with an even nastier goal than the first one.  All in all, Sid and his Kids had a great game and it was epitomized on this shift.  Sheary and Guentzel locked the Panthers in their own zone and forced a really poor decision from Dadonov on the clearance.  Sheary got enough of it in the slot to redirect it to Letang to throw a backhander towards Sid, but way wide of the net. None of that shit matters to Crosby, who still managed to put the puck on net despite it being in line with the end of the trapezoid.

But with just over 13 to play, the Panthers were able to cut the lead to 1 again.  Very poor clearing attempt from Jultz.  Sheary didn’t get enough of the poke check and it had a ripple effect.  Crosby and Guentzel were ready to fly out of the zone, expecting the puck to get out.  But it didn’t and left Ekblad all alone to take an unrealistic feed from Trocheck behind the cage to step into a blast of a clapper.

The two teams would continue to trade off chances, including Reimer putting his name into the save of the year game early in the season with save that would’ve made any footy goalkeeper proud.

Then, for the last 86 or so odd seconds of the game, the Panthers with the extra skater kept the Pens in their own zone without even a hint of a clearance.  Matt Murray do as Matt Murray do, standing on his noggin to kill the game off.

Pens are back in action on Tuesday as they begin a 3 game road trip at Madison Square Garden before traveling to Tampa and Florida.  Go Pens.