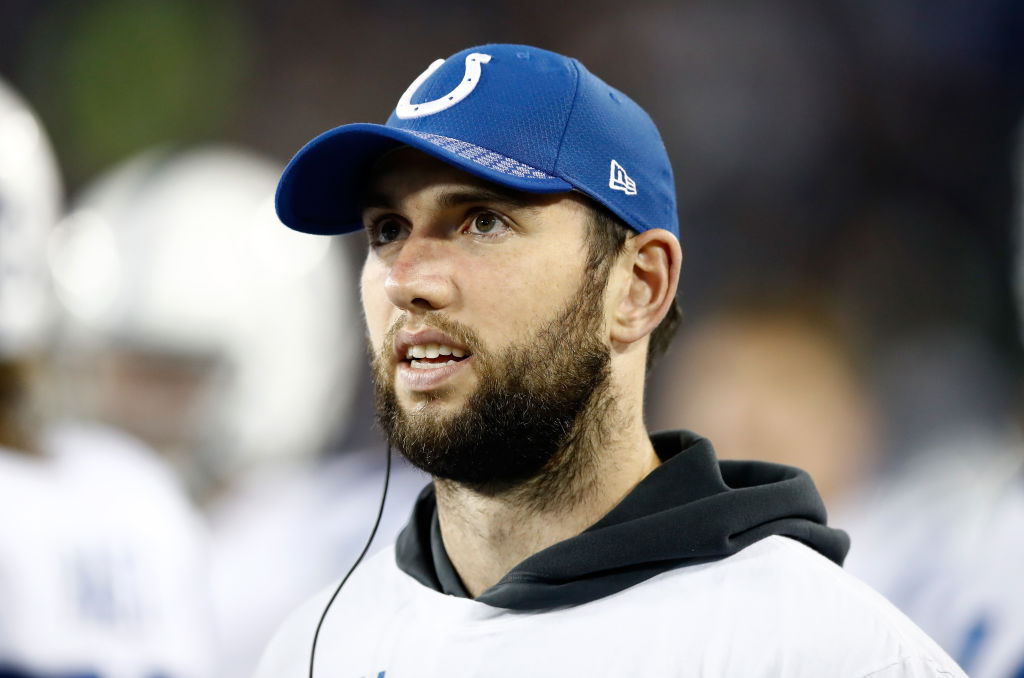 The Colts and Titans squared off on Monday Night Football in a battle of the two sh*ttiest defenses in all the land.  It’s strange to say, but watching the Colts – at least in first halves – I get the feeling that their young, struggling unit is heading in the right direction.  They aren’t there by any means, but they’re going the right direction at long last. I think.  Look, I know this one didn’t end well, but bear with me.  I’ll make the recap worth your 5 minutes.

Indy held up on the road to start the game, forcing Tennessee to settle for a field goal early in the first quarter.  Then the Colts offense, against all odds –  the hostile crowd (I could swear there was a guy with a whistle in the stands trying to make them think the pass to Frank Gore had been blown dead), and their coaching staff’s tendency to telegraph plays to the opposition – managed to match them with a field goal drive of their own, but only after Donte Moncrief – or whoever this guy is masquerading as Donte Moncrief – failed to nab a perfectly thrown 3rd and 11 pass in the back of the end zone.

It was all tied up at 3-3 with 6:45 left in the 1st quarter as the commentators gave their obligatory blurb about how Adam Vinatieri is the Methuselah of the NFL.  We get it, fellas.  He’s older than anyone else who is paid to play with footballs.

– Quick note – John Gruden just said “exotic smashmouth.” It worked in context, I guess.  A little.  Nah, it was weird.  But I like Weird Gruden.  Weird Gruden is fun.  He made it his catchphrase on the night for the Titans tricky-yet-run-oriented offense.

The Colts gave up some big plays on defense the next time out, but the Titans again settled for a field goal, taking a 6-3 lead near the end of the 1st quarter.

– Kamar Aiken’s broken tackle to open up the Colts’ second drive was…I didn’t realize he had that in him.  That was fun to watch.  He snagged a pass in traffic later on that showed that same nasty streak.

– Jacoby Brissett’s 25-yarder to TY Hilton on 3rd and 3 was perfection on the precipice of disaster.  Brissett launched that perfect throw while standing in the middle of total chaos in the pocket.  P O I S E

– John Gruden chastising the coaching staff for calling a quarterback keeper to the left, exposing Brissett’s throwing arm to what turned out to be a pretty rough hit… We’ve been watching this coach for years now, John. Get comfortable.

Brissett finished off one of the most fun drives of the season with a short pass to Jack Doyle – completely dumbfounding a defensive end in the process – and Doyle did the rest for an 8-yard touchdown and a 10-6 lead in the 2nd quarter.

Tennessee continued to move the ball with a steady dose of tricky handoffs and shotgun passes – keeping Mariota in the pocket as he likely isn’t quite 100%, but had to settle for another FG from Ryan Succop.  Either they weren’t taking advantage of a weak Colts defense, or the Colts were doing something right…or both.  We’ll take it.

– Erik Walden sighting…roughing the passer.  Gruden watching the replay: “That’s really bad football.”  HAHAHAHAHA.  Seriously, though, Walden was better than many of us thought he would be in Indy, but most of us still don’t miss him.

The Colts orchestrated a beautiful two-minute-ish drive at the end of the half, but despite some brilliant blocking up front, had to settle for another field goal. 13-9 at the half.

– Halftime thoughts: Both teams’ defensive backs are enjoying some very lax enforcement of defensive pass interference and holding rules.  We’ll have to see how that plays out and which team will benefit most from it.

At halftime, most NFL coaches make adjustments.  They see things they didn’t know they could take advantage of, and, perhaps more importantly, they look for changes they can make to counter things that have been going well for the other team.  I don’t know what Chuck Pagano does during this time, but it’s not that.  Maybe he reads a book.  Maybe he catches up on some This is Us.  Whatever it is, there has been no indication to most fans and observers that he’s tweaking the game plan to his team’s advantage.  This is why the Colts tend to fade in the second half.  The opponent adjusts.  The Colts are caught off guard.

Please, Chuck, prove me wrong, like really, unequivocally wrong.  I will eat the above words with a big dumb smile on my face.

At the start of the second half, the Colts went three and out as the Titans, after making some halftime adjustments, managed to generate fierce pressure on the quarterback and take advantage of the aforementioned letting-them-play approach in the secondary.  Come on, Chuck. Help us out, here.

Of course, you already know the next play was a pick six by John Simon.  Wait, who was it that said when he was signed that Simon’s starts for Houston made him look like he should be a starter?  Hmmm.   Enough of that.  Colts 19, Titans 9.

After another bend-don’t-break effort by Indianapolis (Succop, blah blah, 19-12, Colts), both teams exchanged punts (The Colts FINALLY FORCED A PUNT!!), and then Jack Doyle fumbled at the Indianapolis 31.  Oh, Jack.

– On a brighter note, Rashaan Melvin is out there just ruining people’s days – as long as those people are quarterbacks and receivers.  Too bad about his 4th quarter injury.

Tennessee, with their best field position of the night, still couldn’t put the ball in the end zone…at least not while it’s in anyone’s hands.  Succop, blah blah 19-15, a precarious Colts lead.

As is often the case in the second half, Pagano’s offense died immediately as the opponent figured out how to rattle their simplified game plan (simplified for the backup QB…or because that’s how Rob Chudzinski likes it. Goodness, I hope not).

The defense tends to experience a much slower demise – more of a gradual, tortuous wear-down, a death by exhaustion, and on this night, they spent virtually the entire 3rd quarter on the field.  15 plays, 87 yards, 8:24 off the clock, and Tennessee finally punched it into the endzone for a 22-19 lead (DeMarco Murry) at the 10-minute mark of the 4th quarter.

Quan Bray gave the Colts some of their finest field position of the year with a 60-yard kick return.  How did the Colts seize the moment?  They didn’t. They had to kick a 52-yard field goal.  ESPN nearly missed another opportunity to drone on about how Vinatieri is somewhere between 44 and the Crypt Keeper from that Goosebumps show in the 90s.

Mariota to Taywan Taylor for a 53-yard TD.  29-22, Tennessee.  Adjustments.  I’m figuratively dying inside (See how I didn’t misuse “literally,” there?  I would never do that to you.  I’m not a monster).

The Colts came back to life on offense, and Moncrief continued to redeem his early miscue with a huge 23 yard catch down to the Tennessee 22, only to have Jack Doyle fumble again – reviewed – and overturned to incomplete.  My friends, Doyle isn’t a budding superstar who’s hit a rough patch.  He’s just a guy.  He’s a fine backup who happens to be a starter out of necessity.  Brissett’s 4th and 1 quarterback keeper was a cool-looking play call, but it didn’t work out.

Let’s take a moment to be glad Pagano didn’t lose this thing by kicking a weenie field goal with 2:26 left.  A run up the middle against a kitchen sink blitz looked like a terrible idea.  A pass when your back QB is struggling mightly also looks stupid.  Unfortunately, the Titans weren’t fooled.

I’m glad you’re still reading this.  Friends, this team was just good enough tonight to win with a healthy Andrew Luck (in my opinion) and almost good enough to pull a rabbit out of their hat anyway.  I don’t know how much that says about them against the so-so Titans and with a coaching staff that spends entire second halves wondering why other coaches keep tricking them, but I most certainly wouldn’t have said this about last year’s team.

Is the otherwise likable coach as big of a problem as we tend to think?  I truly don’t know, and I’m not so sure the paid expert-types know either.  There are plenty of bad coaches out there who don’t manage to inspire their players the way Pagano can.  However (and I paused here to watch Derrick Henry’s 72-yard Touchdown run to ice the game), we’ve never seen this team come in better prepared than the other team and stay that way in the second half.

I still contend that the defense’s arrow is pointing up, even if only a little, but when the team has no answer for anyone else’s halftime adjustments, they’re just going to wear down and give up scores late, week after week.  I hope Andrew Luck is ready soon, and I hope next year’s coach – I don’t care if it’s Pagano, fan favorite John Gruden, or a cardboard cutout of Ron Meyer, doesn’t spend entire halves (or worse) guiding a team that looks completely lost.